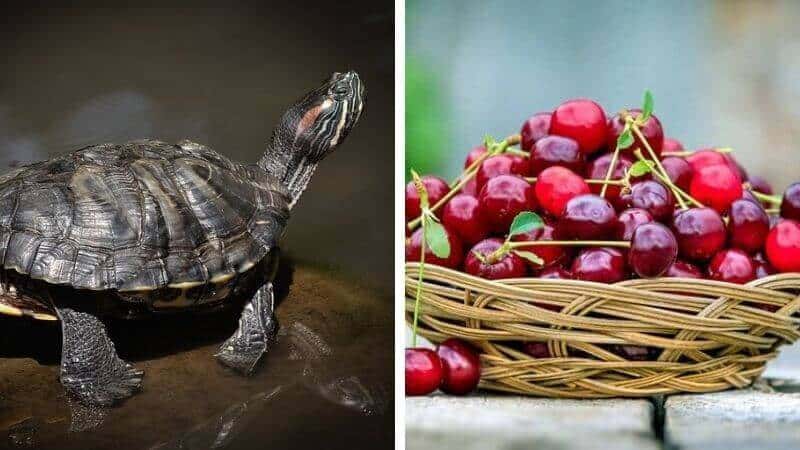 Do you know a single cherry tree can bore 7,000 cherries? It’s roughly enough to make 28 pies! This stone fruit’s history is just as unique as its taste – dating back to 70 BC. So, given the ancient timeline cherries and turtles share, it made me wonder – can turtles eat cherries? Or is it poisonous to their health?

After doing my fair share of research, I incorporated cherries into my turtles’ diet a few months back. And I’m pleasantly surprised with the results.

Keep reading. I’ll tell you all about it!

Can turtles eat cherries? Yes, turtles can eat cherries. They contain moderate amounts of vitamin A and calcium – nutrients imperative to turtles. However, cherries are also high in sugar and contain malic acid. Thus, you should only give cherries as occasional treats once in a while.

Watch this lovely video of a turtle enjoying cherries!

It’s best if you don’t give cherry leaves to your turtles. The leaves and twigs are known to contain traces of cyanide, known as prussic acid. While its effect on turtles is yet to be studied, it could potentially be toxic for turtles.

If your pet turtle accidentally consumed some cherry leaves, don’t forget to monitor his behavior and bowel movement for a day or two. During the course, if you find anything suspicious, make sure to contact the vet.

No, turtles shouldn’t eat cherry pit since it contains cyanide, which can harm turtles. I always make sure to remove the pits before I give cherries. And across several turtle forums I visited, all pet parents suggested removing the pits first.

When cherry pits are chewed or metabolized, they release a chemical called amygdalin, which the body then converts into cyanide.

Reportedly, a red cherry pit has around 3.9 mg amygdalin per gram of fruit, a bit higher concentration than a black cherry pit that clocks in at 2.7mg per gram.

However, the Morello cherry pit has an astounding 65mg amygdalin per gram.

That’s why it’s best to remove the pits every time you give cherries.

It’s best to not give your turtles dried cherries as they have far denser sugar content. A one-third cup of dried cherries contains almost 30 grams of sugar. Thus, there’s a high chance that it’ll be harmful to your turtle.

Once again, you should steer clear of canned cherries as they often come packed in juice or sugar syrup that’s loaded with sugar. A cup of canned cherry can reportedly have around 15 teaspoons of sugar.

How Many Cherries Can You Give A Turtle?

You can give one or two cherries once a month as part of the turtle’s diet or a refreshing snack. I know some owners that feed cherries more frequently without a problem, but I prefer treating them once monthly.

From my own experience, I’ve seen turtles become quite picky with what they eat when they receive tasty snacks like cherries more often.

How To Feed Cherries To Turtles?

Always make sure that you buy organic cherries for your turtle. To get rid of the pit, hold the fruit between your two fingers. Position the slimmer end of a chopstick into the stem hole. Next, firmly press the chopstick down into the pit and push it out.

Once the pits are removed, you can give the whole cherry or cut it into two halves.

Let’s look at the nutrition table for a more detailed look.

Nutrition Table For 100 grams Of Cherries

The percent values are calculated based on a 2000 calorie diet.

Besides the nutrients mentioned above, cherries also have traces of vitamin K, vitamin B, manganese, and phosphorus.

Cherries pack a lot of nutrients for such tiny fruits, don’t they? But do they bear any value for turtles? Let’s find out.

2 Health Benefits Of Cherries For Turtles

As healthy as cherries are, they don’t offer much nutritional value to turtles. However, they contain small amounts of vitamin A and calcium, which are very important for turtles.

Let’s find out why these 2 nutrients are imperative for turtles.

Why Do Turtles Need Vitamin A?

In turtles, vitamin A is vital to maintain eye and respiratory health since they’re pretty prone to infections. This nutrient is also responsible for the good health of the skin, mucous membrane, and ducts of organs.

However, cherries contain minimal amounts of this vitamin. So, make sure that your pet eats a lot of green, leafy vegetables.

I also add a few drops of vitamin A supplements like this one from Nature Zone since one of my turtles suffered from hypervitaminosis in the past.

Why Do Turtles Need Calcium?

Calcium is responsible for ensuring sound health and the development of the entire skeletal system in turtles. A lack of this nutrient can cause deformed and stunted bones and shells, often leading to grave conditions like metabolic bone disease (MBI).

And although cherries do contain calcium, once again, the amount is very minute. As a matter of fact, you should never rely on fruits to supplement calcium needs.

3 Things To Consider When Feeding Cherries To Turtles

If you don’t regulate the amount and frequency of giving cherries, this could harbor severe problems. Since cherries have high sugar content and are acidic, they can irritate your pet’s gut and bring further complications. Likewise, the pesticide traces found in cherries can spell trouble if you’re not careful.

According to the Environment Working Group (EWG), cherries contain residue of at least two or more kinds of pesticides. And if you don’t know, pesticides can stay in a turtle’s body for years.

Thus, always make sure that you’re buying organic and traceable cherries. Also, don’t forget to get rid of the leaves and stems, which are frequent recipients of these chemicals.

100 grams of red cherries contain 8 grams of sugar. The numbers are even higher for sweet cherries that clock in at 13 grams for the same quantity.

Unfortunately, a turtle’s gut isn’t equipped enough to digest sugary compounds like fructose, glucose, and sucrose present in cherries. As a result, he can suffer from insulin resistance and spiked blood levels.

In the long haul, frequent feeding of sugary foods like cherries can cause obesity and diabetes. This may seem far-fetched, but you’d be surprised to know these two conditions are widespread in turtles.

With pH levels ranging between 3.2 to 4.0, cherries are acidic fruits. Malic acid is dominant in cherries, but they also contain quinic, phosphoric, and citric acids. But a turtle’s digestive tract cannot safely digest all these acids.

Thus, your turtle may suffer from acidic reflux, bowel irritation, and diarrhea.

In case your turtle consumed lots of cherries at once, this could wipe down the entire bacterial colony in his gut. As a result, harmful toxins can enter the bloodstream and can cause lethal complications.

Yes, box turtles can eat cherries within limitations. However, fruits like cherries should never make up more than 10-15% of their regular diet.

On days that you give cherries, it’s wise to not give any other kind of fruit.

Yes, cherries are safe to consume for aquatic turtles as long as you’re giving them within moderation. Cherries aren’t a part of their natural diet in the wild. Thus, their body and taste buds may not adapt to the fruit quickly.

If they don’t seem to like it, don’t force it.

Yes, turtles can eat cherries. When given sparsely, cherries do offer certain health benefits to your pet reptile. For instance, it contains vitamin A and calcium – although sparingly.

However, more than a nutritional food, cherries are refreshing snacks for turtles.

Make sure that you don’t overindulge them too much as there are a few caveats attached to them, like high sugar and acid content.