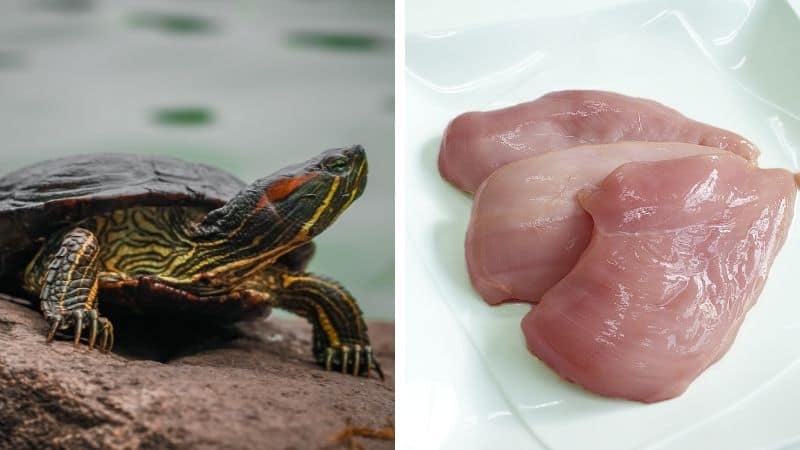 As slow as a turtle maybe, they boast some decent hunting skills. In the wild, turtles supplement their protein needs by hunting down critters, fish, and worms. But in the comfort of captivity, is it okay if they eat meat meant for us? Can turtles eat chickens?

As omnivores, turtles can eat small pieces of boiled chicken to fulfill their protein needs every once in a while. However, absolutely refrain from giving raw chicken since it may contain deadly parasites like salmonella. They also have very high amounts of protein than what turtles usually need.

In the wild, a turtle seldom has an opportunity to feed on chicken – raw or cooked. Thus, their guts are not equipped to digest chicken and all the caveats that come with it – like dense protein, collagen, and pathogens.

How Often Should You Give Chicken To Turtles?

For turtles, chickens should be given sparingly. You can provide a small amount of chicken once or twice a month. On days that you give chicken, make sure he doesn’t have other protein-rich food in his diet.

Too much protein consumption can cause kidney problems in turtles.

The frequency also largely depends on the turtle’s age and species. For instance, a carnivore Snapping turtle obviously appreciates more frequent and bigger chicken pieces than omnivores like Red-eared Sliders.

Also, older turtles are more inclined towards greens and leaves, while younger ones prefer flesh-based food.

But irrespective of the age and species, don’t ever make chicken a regular part of your turtle’s diet.

How To Prepare Chicken For Turtles?

You can simply boil the chicken in plain water and cut them into small pieces for your pet turtle. Make sure that you don’t add any oil or seasoning. Also, chicken must be cooked perfectly well done – no rare, medium-rare, or anything like that.

Also, don’t give chicken prepared for people. The oil, salt, and seasonings present in them can make your pet sick. Likewise, steer clear from canned chicken and store-bought fried chickens since they contain preservatives that won’t go down with your pet’s gut.

How Much Chicken Should You Give Your Turtle?

When giving any food in moderation, the rule of thumb is to provide a piece as big as the space between the turtle’s two eyes. You can apply this same method to your pet.

You can either give the whole piece to make cleaning easier or shred it slightly to facilitate easy swallowing.

Why You Shouldn’t Give Raw Chicken To Your Turtle

Since raw chicken sticks together and doesn’t flake in water, it can be tempting to give it instead of boiled alternatives.

Giving raw chicken is downright dangerous for turtles. Raw meat is a carrier of several deadly bacterias like salmonella. Likewise, it isn’t rich in essential nutrients that turtles need. On top of that, it can cause indigestion and a number of other complications.

Chicken is considered to be one of the top foods to cause poisoning. Giving raw chicken to your turtle is only asking for trouble. The raw flesh carries several bacterias like salmonella and campylobacter.

And as you already know, salmonella won’t just make your turtle ill but can also be easily transmitted to humans and infect them.

Raw chicken is exceptionally rich in collagen, thanks to the high density of connective tissues in the meat. But your turtle’s digestive tract will not be able to digest it well. Collagen is a good source of protein, but chicken meat isn’t ideally the best source of protein.

Collagen isn’t precisely an indispensable nutrient for turtles. While it does impart some benefits, the cons clearly outweigh the pros.

Raw chicken doesn’t contain the correct calcium-phosphorus ratio turtles require – thus, it isn’t recommended. According to USDA, 100 grams of chicken contains 15 mg of calcium and 223 mg of phosphorus. This is definitely far more than ideal for turtles.

The calcium-phosphorus ratio for turtles should be around 2:1. But as you can see, in raw chicken meat, it’s way off the mark.

If there’s not enough calcium in your turtle’s diet, he’ll be highly susceptible to bone disorders like metabolic bone diseases.

Yes, as omnivores, Box turtles can eat boiled chicken scarcely. Their diet should primarily include at least 50% animal-based protein. However, it’s better to fulfill that need with other meat alternatives like worms, snails, shrimps, and krills.

Painted turtles can consume steamed chicken in moderate amounts. However, since it’s not part of their diet in the wild, it can cause digestive complications. Thus, it’s best not to feed chicken.

As carnivores, Snapping turtles are tempted to eat any kind of raw meat, including chicken. However, it’s not wise to give raw chicken since there are too many risks attached.

In the wild, they often hunt down birds like ducks and geese. But still, eating chicken is unnatural for them and should be avoided.

One time, a Snapping turtle tried attacking chickens on my friend’s poultry farm. We believe he was trying to get past the chicken to the chicks and eggs. However, big Snapping turtles can easily put up a fight and defeat chickens.

Chicken liver contains vitamin A and iron that turtles need for their body but in very high concentrations. It’s best not to give chicken liver to Box turtles or any other pet turtle since it’s known to cause gastrointestinal complications.

In turtle forums, some owners shared that they give teeny tiny pieces of cooked chicken liver now and then without any problem. But they also mentioned that it makes the water very dirty.

Thus, it’s best to not give chicken liver to Box turtles at all.

Conclusion On Can Turtles Eat Chicken

Yes, turtles can eat boiled chicken as a delicious treat every once in a while. Make sure the chicken is boiled without any kind of oil or seasoning.

However, entirely refrain from giving raw chicken as it can be toxic to turtles. From catching salmonella to kidney complications, there are too many risks involved.