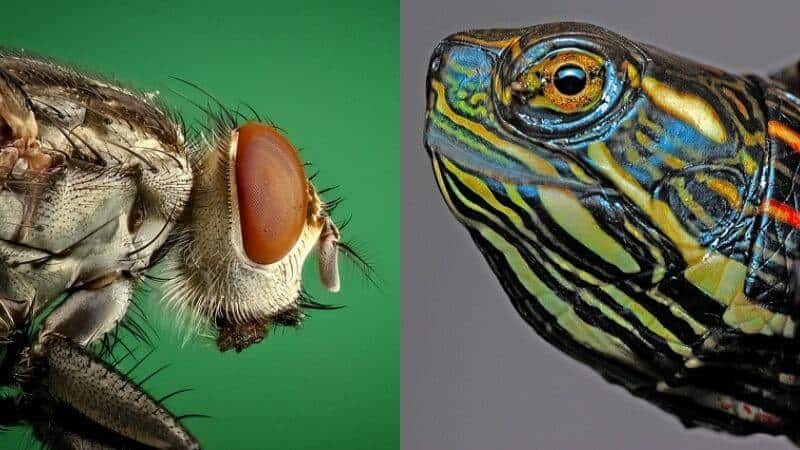 You probably know that turtles require protein in their diet quite a lot. So, feeding insects you find in your home may have crossed your mind. And the first common insect you’d probably encounter would be a fly.

But you also realize that flies are the carriers of parasites and bacteria. So, you don’t know whether you can feed your turtles flies.

I have done my fair share of research on whether turtles can eat flies. So, today, in this episode of turtles, I will answer, can turtles eat flies.

Turtles are omnivores and will eat almost everything. So, if given a chance, they will not exclude flies from their meal. Flies are insects, and turtles enjoy devouring insects. However, flies like houseflies are infamous for their poor hygiene – swarming over decaying food, animal corpses, and feces.

Hence, your turtles can get ill if they consume houseflies.

Also, houseflies provide little to no nutritional value when compared to other protein-rich insects.

Did you know that houseflies and blowflies together carry over 600 diseases? They carry all sorts of pathogens harmful to humans, animals, and even plants.

But you should avoid feeding turtle wild flies as much as possible. As I mentioned earlier, wild flies carry a host of bacteria and microorganisms that can easily transmit to your turtles.

I know it’s annoying to have flies buzzing around the house. But, it doesn’t mean they should end up in your turtle’s system.

Do not feed your turtles the flies you killed using bug-killing gears. These products have poisonous chemicals in them, which can be toxic for turtles.

Why You Shouldn’t Feed Houseflies To Your Turtles?

Houseflies are notorious for transmitting diseases and have low nutritional value. So, do not feed houseflies to your turtles.

If the filthy eating habit of flies isn’t enough to disgust you, the fact that they transmit diseases to your pets should stop you from feeding them to your turtles.

Feeding flies to your turtle doesn’t put only the reptile at risk but also can jeopardize your health.

Zoonosis is the transmission of disease from animals to humans. Let me brief you on how pet owners can become victims of zoonosis because of feeding flies to their turtles.

When turtles are fed the disease-carrying flies, their bodies become a host for the bacteria.

And, the cycle continues when the pet owners themselves get infected while handling and feeding their turtles from their hands.

Along with hefty medical bills, you will also have to spend a premium amount to eradicate these flies from the enclosure and your home.

Some diseases houseflies carry are:

Though there’s the danger of getting a disease from zoonosis, it isn’t the only way flies transmit diseases.

They Can Directly Transmit Germs To Humans, Too.

So, for your and your turtle’s safety, consider houseflies as pests rather than a meal for your turtle.

Compared to other tasty insects for turtles, houseflies have meager nutritional value. Though they contain protein just like every other insect, they lack vitamins and minerals essential for turtles.

Feeding one or two houseflies to your turtles will not come close to meeting a turtle’s dietary requirements.

Diet charts show that you will require about 30 houseflies to satiate your turtle’s hunger and meet their nutritional demands.

Even if you can achieve this feat, it’s not worth it.

The germs these flies carry can quickly spread to your turtles and ultimately to you.

Your turtle’s health should be a top priority, and you cannot simply put them in danger by feeding that many houseflies at once.

Yes, there are abundant adult flies available in pet stores to feed turtles. But you should know that there are much better alternatives (insects) to enrich your turtle’s diet.

They are non-smelly insects that are high in protein and calcium. Turtles love eating them.

Another favorite of turtles, they provide calcium and protein, and it also keeps turtles full.

They are minimal in calcium sources, but turtles go on a feeding frenzy when you serve these worms. But they are rich in protein.

What annoys me about crickets is that they produce noise and can be smelly. So, you can feed them only when you are in shortage of other nutrition-rich insects.

It is not the same as houseflies. Larvae pack all the nutrients necessary for turtles. Turtles can digest them easily and also find them tasty.

The insects mentioned above are all rich in nutrients and can keep your turtle satiated.

Turtles have a distinct smell that can attract flies. And the food they consume can also attract flies. For example, if the debris of veggies and fruits you served decays inside the enclosure, naturally flies will pay a visit.

Flies are also drawn towards feces. So, a dirty turtle tank can definitely attract flies. You will witness this phenomenon more during summer. Furthermore, flies proliferate during the warmer season.

How Do I Get Rid Of Flies From My Turtle Tank?

Turtles have a distinct smell to them, which can attract flies in their tank. To get rid of flies:

Do not use bug-killing sprays inside your turtle enclosure. These sprays contain harmful chemicals, which will bode more ill than good when sprayed in their habitat.

Instead, use rolled-up magazines and newspapers to swat them.

You can also hang fly strips above the turtle tank to trap houseflies. Do not feed trapped flies to your turtles because these glues contain chemicals that can make your pet ill.

You shouldn’t feed dead flies to your turtles, as they can still carry bacteria long after they die.

So, it isn’t recommended to feed dead flies to your turtles.

Turtles eat every kind of insect, including flies. But these particular insects are agents of diseases that can wreak havoc to your turtle’s health, along with yours. So, you shouldn’t feed wild flies to your turtles.

However, it is safe to feed them store-bought flies.

These flies are raised in captivity and aren’t in contact with any zoonotic diseases. But the thing about store-bought flies is that they have little to no nutritional value.

Yes, they have a punchy amount of protein, but they lack vitamins and calcium, which are equally crucial for turtles.

Hence, better alternatives like mealworms, larvae, and superworms provide better meal value to your turtles than the flies do.