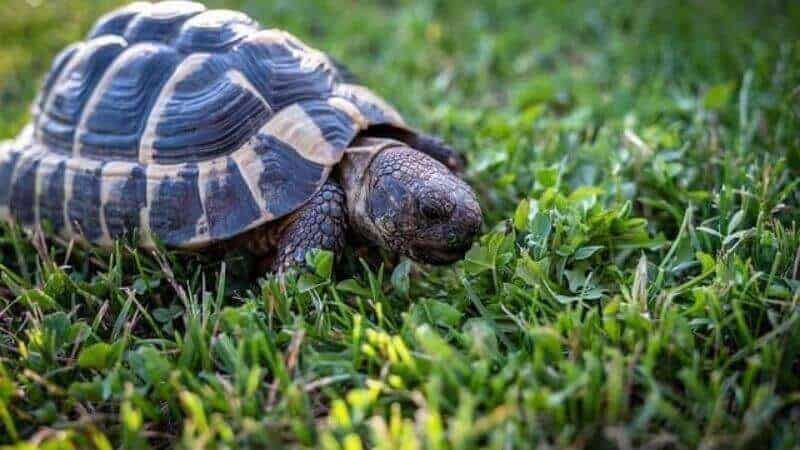 There are about 12,000 grass species on earth, divided into 12 subfamilies. And they make up about 26% of life on earth. Food and home to millions of species, is grass safe for turtles? Can turtles eat grass?

There’s more to its answer than a simple yes or no. And as a fellow turtle parent, I must tell you everything you need to know on this topic so that you’re equipped with the knowledge to make the best decisions for your pet.

Yes, turtles can absolutely eat grass, which forms a big part of their diet in the wild. Most omnivore turtles love munching on grass as their staple food. Also, a turtle’s inclination towards grass grows stronger with its age.

Grass, wherever it occurs, is a low-calorie, nutritional snack for turtles. And as you know, opportunistic turtles aren’t too picky about the type of food they get to eat. So as long as the grass isn’t laden with harmful pesticides, they’re safe for turtles to graze and forage on.

If your pet is lucky, your pet may even hunt down a couple of critters and bugs when grazing.

Absolutely. Since most sea turtles are omnivores, seagrass forms a big chunk of what they eat underwater. Like their terrestrial cousins, sea turtles are predominantly herbivores in adulthood, increasing their grass intake even more.

And do you know this dietary behaviour is quite important in maintaining the marine environment? For example, if sea turtles didn’t ‘trim’ them, seagrass beds would become overgrown and block currents.

Watch this awesome ASMR video of a sea turtle in action!

Yes, turtles like grass and will eat it in abundance if they have the chance. However, some carnivore species like alligator snapping turtles will not.

In the wild, turtles usually eat whatever kind of grass that’s available.

That being said, there are 356 turtle species, and there will always be a few exceptions.

Yes, most pet turtles love snacking on grass. When I take my sliders to the backyard for playtime, they often nibble on the grass here and there. If you plan to do the same, make sure the grass is free of chemical fertilizers.

But since captive turtles get to eat a lot of tasty snacks like veggies, pellets, and critters, there’s a good chance they may not be down for plain-tasting grass.

If that’s the case with your pet turtle, don’t force it. There are plenty of delicious and healthy options available.

And that takes us to our next question.

What Grass Is Best For Turtles?

There’s no one definitive answer, but turtles are known to love alfalfa, rice grass, kelin grass, oat grass, wheatgrass, and barley grass. Herbs like parsley, thyme, and coriander also make great occasional snacks as long as they are fed sparingly.

Here’s a list of some safe grass options for turtles if given in moderation:

Is Grass Healthy For Turtles?

Dewy grass can help meet a turtle’s hydration needs. Besides that, there are no significant health benefits of grass. Grass does contain traces of vitamin A, vitamin C, and phosphorus turtles need but in minute amounts.

On the flip side, most grass varieties have high protein concentrations that can backfire when overconsumed. In addition, protein overdose can cause pyramiding and other bone health problems in turtles.

To keep growth and bone-related complications at bay, I like to take the help of cuttlebones like this one from Zoo Med.

Since my turtles love to nibble on these bones, it has helped sand their beaks down and prevent overgrowth of beaks in check.

However, small bits and pieces do fall to the bottom, making the tank a bit cloudy.

I’ve also recently bought a calcium supplement spray by Zilla. I switch between the cuttlebone and spray routinely.

As recommended, I spray the solution a few times directly onto the food 15-20 seconds before feeding.

Wheatgrass is a popular choice to feed among turtle keepers. It is an excellent source of vitamin A, vitamin C, calcium, and iron that turtles need. It is also rich in antioxidants which help to keep infections and diseases at bay. Thus, it’s perfectly ok to give wheatgrass once in a while.

The answer to can turtles eat grass often boils down to the turtle species. So, let’s see if some of our most popular turtles feed on this leafy, green snack.

So if your young snapping turtle isn’t interested in eating grass, don’t force it.

Yes. As terrestrial and omnivore beings, box turtles largely feed on available grass in the wild. So, it’s perfectly fine if your pet box turtle consumes it once in a while.

However, as I mentioned above, grass is often too high in protein. Thus, you should always give it under limits to curb the risks of pyramiding.

Painted turtles can and do eat grass available near their natural habitats like shallow lakes, wetlands, creeks, and ponds. They also eat aquatic plants.

However, if you’re introducing grass to your captive painted turtle’s diet for the first time, make sure to start with small amounts.

Of course. Lake turtles will eat grass, which in fact, is a big part of their everyday diet. But, besides grass, they dine on frogs, bugs, critters, and small fishes available in the lake and its surrounding.

Yes, baby turtles, too, eat grass. However, as babies and juveniles, turtles are more inclined towards a carnivore diet. So, if your baby turtle shies away from grass, don’t be surprised.

And as I mentioned above, grass doesn’t contain a good amount of nutrients that turtles need.

A growing turtle’s diet should be fortified with essential nutrients that aid its development. And grass definitely doesn’t meet that nutritional requirement.

Yes. How cool is that? Rose, lily, hibiscus, geranium, pansy, carnation, and petunias – your turtle can eat all of this. But you know the drill, right? Flowers should only be given as occasional treats.

But even for omnivore turtles, plant matter should only make up around one-third of their diet. And even that part should mainly consist of green, leafy veggies and occasional fruits and flowers.

When giving any kind of flower, make sure to do a bit of internet research. Because not all flowers are created equal for turtles. For instance, flowers like rhododendrons and daffodils are known to be toxic for box turtles.

Yes, turtles can eat some selected herbs as long as you’re giving them in moderation. Some herbs safe for turtles are arugula, basil, fennel, and rosemary.

However, since herbs have a strong smell and flavor, some turtles don’t seem to like them. So if your pet doesn’t seem keen, don’t give it.

But if you have a young turtle who is more inclined towards meaty food, it may not prefer consuming succulents.

Yes, turtles can eat a wide range of grass such as alfalfa, barley grass, oat grass, rice grass, and wheatgrass.

However, since grass doesn’t hold much nutritional value for turtles, it’s best to only give them once in a while. In fact, a higher concentration of protein found in the grass could cause some health problems if you feed grass regularly.

Like grass, turtles can also eat certain herbs, flowers, and succulents. However, as always, don’t forget to do a bit of extra internet research before introducing anything new to your pet’s diet.

How Long Does It Take For Painted Turtle Eggs To Hatch? An Interesting Phenomenon