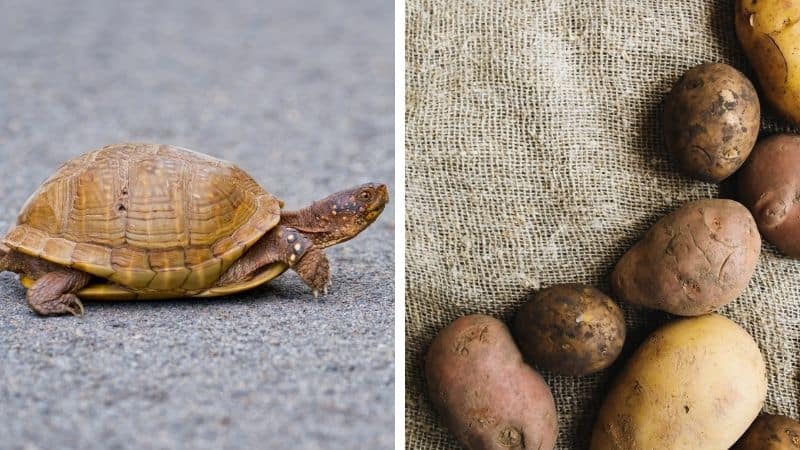 The thing with turtles is that they can eat most fruits and veggies as long as they’re given as occasional treats – with few exceptions, of course! Some can be downright fatal. So, can turtles eat potatoes? You might want to read this.

Turtles can eat potatoes in minimal amounts once a while as part of their large diet that must include generous servings of greens and veggies. In moderation, potatoes are a good source of vitamins and minerals like folate, potassium, vitamin C and B6. However, they’re also starchy and contain some antinutrients for turtles.

Potatoes come from the Nightshade plant family. Thus, they contain light traces of glycoalkaloids solanine and chaconine. In some cases, these compounds can negatively impact a reptile’s nervous and digestive system.

Headache and diarrhea are some mild side effects. However, it can also be fatal if your pet turtle consumes lots of potatoes.

Personally, I seldom give potatoes to my turtles. I think the potential risks somehow outweigh the benefits. However, I know some friends that include potatoes (in small amounts) in their pet turtle’s diet and haven’t had any issues.

Also, on many turtle forums, I read real-life experiences shared by turtle owners across the world about feeding potatoes. Luckily, they, too, have never run into any issue.

But as I said above, you should give potatoes in limits. Small pieces here and there once in a blue moon. They should never make regular appearances in your pet’s diet.

Now let’s answer whether turtles can eat all parts and kinds of potatoes or not.

Absolutely no! Potato leaves contain toxic compounds called solanine and glycoalkaloid, which the plant produces to protect itself from the harsh sun. These leaves are even harmful to humans. You can only imagine what it could do to your poor turtle.

If your pet turtle accidentally ate some potato leaves, it’s best to ring the vet and closely monitor symptoms.

By the way, this answer also extends to stems and sprouts. The green parts of the potato, like leaves, sprouts, and stems, contain poisonous alkaloids.

The peels contain a lot of essential nutrients. Unfortunately, they also often contain traces of fertilizers and toxic pesticides. Thus, if you’re giving potatoes, it’s best to thoroughly clean and peel them first.

Sweet potatoes are relatively safer than potatoes for turtles. Thus, you can feed them a couple of times a month alongside other greens and veggies. They’re excellent sources of vitamin A. However, they also contain oxalic acid, which hinders the calcium absorption process in turtles.

And as the name suggests, they’re also on the sweeter side, which isn’t really good news for turtles.

So, once again, don’t overindulge your turtles on sweet potatoes. A small piece around the size of space between their eyes, whole or grated, should be enough.

You can definitely mash the potatoes before feeding your turtle. This will make swallowing a lot easier for them. However, don’t give mashed potatoes prepared for people.

The herbs, seasonings, and salt that go into making mashed potatoes probably won’t go down well with your turtle.

Potatoes have a bad reputation for being full of carbs. But this humble vegetable also has a pretty decent nutrition profile. It also contains fiber, protein, potassium, vitamin C, folate, and Vitamin B6.

Nutrition Chart For 100 Grams Of Potatoes

Note: The percent values are based on a 2000 calorie diet.

Are Potatoes Healthy For Turtles?

As you can see from the table above, potatoes aren’t the healthiest vegetable for turtles, but they do impart some benefits.

Vitamin A found in potatoes help to ensure proper health of the eyes, lungs, and mucous membranes. Likewise, vitamin C helps strengthen the immune system, and minerals like calcium and potassium are responsible for developing bones and shells.

However, as you can see, the amount of vitamin A and calcium that turtles need the most is pretty scanty. Also, there’s a high concentration of potassium present compared to calcium, which isn’t suitable for turtles.

So, although potatoes do offer some nourishing properties to turtles, they’re quite short of impressive.

Now let’s look at the possible complications that can arise from overfeeding potatoes. Can turtles eat potatoes or not also depends on the risks that tag along with it.

2 Things To Consider While Giving Potatoes To Turtles

If you’ve decided to give potatoes to your turtle, it’s best to educate yourself about some of its contents that aren’t too good for them.

For instance, potatoes are high in starch and sugar, which don’t offer any nutritional value to these reptiles. Also, potato peels are often laden with poisonous pesticides that can negatively impact their health.

Potatoes are super high in starch. In turtles, just like us humans, the excess energy and carbohydrates could lead to obesity. Starch provides negligible nutritional value to turtles. Thus, you should really watch the amount you give.

Like most carb-containing food, potatoes are naturally high in sugar. And sweet food can cause insulin resistance and cholesterol spikes in reptiles. So, be careful not to give too many potatoes.

And although sweet potatoes are spared slightly, they do contain moderate amounts of pesticides.

Yes, box turtles can eat potatoes since 50% of their diet should consist of greens, veggies, and fruits. However, overfeeding potatoes could lead to many unsolicited illnesses due to their high sugar and starch content. So, only feed potatoes within limits.

Yes, Slider turtles, too, can eat potatoes. However, you really need to execute caution when giving this stem vegetable. Potatoes aren’t something Red-eared sliders eat in their natural habitat. Thus, your pet’s gut can get quite messed up in some cases.

If you plan to give potatoes, always make sure to check if he’s acting erratic or ill later on.

Tortoises, as pure herbivores, can eat potatoes. Potatoes aren’t downright toxic but not necessarily good for them either. You can give a small piece of potato mixed with other greens and veggies every once in a while.

Conclusion On Can Turtles Eat Potatoes

A quick rundown: Yes, turtles can eat potatoes, but it’s not the healthiest vegetable for them. Potatoes contain low traces of vitamin A and calcium that turtles need.

However, it’s high in sugar and starch that can make them sick quite seriously.

You have to channel quite a bit of caution if you want to feed potatoes. You can give small pieces occasionally as a tiny part of their main diet.

Make sure that they don’t overfeed on potatoes, though!