Can Turtles Eat Pumpkin? What About Seeds, Leaves, And Stems? 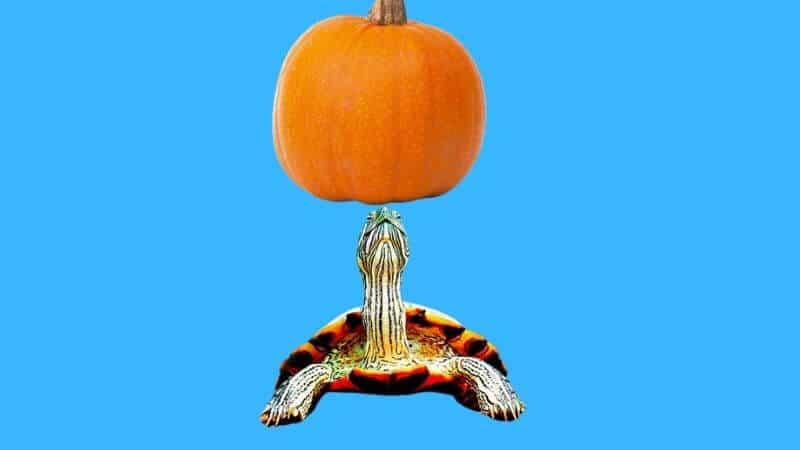 Turtles are easy-to-rear pets who enjoy a wide variety of food. But not all food is safe for them. Therefore, researching what’s good for them and what isn’t is the way forward.

There are several common foods that both turtles and humans enjoy. And does a pumpkin fall under this category?

Turtles can eat pumpkin but only occasionally. Pumpkins are low in nutrients essential for turtles. They also have inappropriate calcium to phosphorus ratio, resulting in metabolic bone disease.

Are Pumpkins Safe For Turtles?

If fed moderately and occasionally, pumpkins are safe for turtles. However, steer clear of the seeds, which can cause impaction as they are not easily digestible. Also, the wrong calcium to phosphorus ratio makes the turtle susceptible to metabolic bone disease.

Here’s a table containing the nutritional value of 100g serving of pumpkin as per USDA:

Risks Of Feeding Pumpkin To Turtles

Despite numerous health benefits, feeding pumpkins to your turtles also poses risks. One of the main concerns is the calcium to phosphorus ratio.

As evident from the table above, you can see that the calcium to phosphorus ratio is 1:2 in pumpkins.

However, the ideal ratio is just the opposite.

This inaccurate ratio in pumpkins raises the concern of too much phosphorus reacting with calcium to form calcium phosphate.

Did you know that diabetes is one of the common diseases seen in turtles and tortoises?

The same explanation that concerns diabetes in humans applies to turtles, too. When a reptile lacks glucose in the blood, generally caused by lowered insulin, the chances of contracting diabetes are high.

And the sugar content in pumpkins has been associated with an increased risk of type 2 diabetes. That being the case, it is recommended not to feed pumpkins daily.

Benefits Of Feeding Pumpkins To Turtles

Pumpkins are rich in vitamin A and vitamin C. As we all know how important vitamin A is for turtles, feeding pumpkins occasionally is beneficial. It can boost a turtle’s health by developing healthy skin, mucous membranes, and organ ducts.

Pumpkin is well-endowed with fiber, which ensures smooth digestion and helps turtles empty their bowels easily.

That’s why you should try feeding it to baby turtles.

Baby turtles lean towards a protein-based diet, which requires consuming insects and worms. But, on the other hand, they deter a vegetarian diet.

However, it doesn’t mean they can go without eating their greens.

So, to fulfill their plant-based nutritional demands, feeding pumpkins can be a good idea.

How To Prepare Pumpkins For Turtles?

There’s no secret recipe to follow while preparing pumpkins for turtles. Instead, you can get a raw pumpkin from the produce and wash it properly to get rid of dirt and additives.

Now, cut them into several sections to help you peel off the rind easily.

Remove the seeds and chop them into tiny bits, small enough for your turtles to swallow.

Can You Feed Turtles Raw Pumpkins?

Yes, you can feed raw pumpkins to turtles. Often, cooked foods are not recommended for turtles unless it is meat. Plain pumpkins are natural laxatives that ease their digestion.

In addition to that, raw pumpkins are rich in vitamin A, which is essential for repairing tissues and functioning of the eyes.

Although pumpkin seeds are rumored to have deworming properties, they seldom pass through a turtle’s digestive system to fulfill any health promises.

Any types of fruits or vegetable seeds are the first cause behind impaction.

So, it isn’t recommended to feed pumpkin seeds to turtles.

And if you want to deworm your turtle, get essential medications from the vet themselves.

Pumpkin leaves are rich in calcium and vitamins like A, B, and C. These nutrients are essential for turtles.

However, pumpkin leaves also contain oxalates which can bind necessary minerals like calcium, a primal reason behind turtle’s getting metabolic bone disease.

Although pumpkin puree is technically safe, it shouldn’t be fed as regular turtle food. Instead, provide raw pumpkins, which are acceptable as an occasional snack.

No, you shouldn’t feed pumpkin rind to turtles. Rinds are dry and hard for turtles to digest. In addition, turtles do not chew their food. Instead, they swallow their food whole. So, there’s a chance of choking, too.

Yes, pumpkins as an occasional treat are acceptable for feeding box turtles. They are rich in calcium and vitamin A and C, nutrients essential for box turtles.

You can occasionally feed pumpkins to baby turtles. Baby turtles lean towards meaty diets – thus, they are dubious when it comes to eating veggies. Therefore, an occasional pumpkin serving is safe and healthy for baby turtles.

Before feeding, chop the pumpkin into tiny pieces to avoid choking. Or, you can squash it and feed your baby reptiles.

Fruits are occasional diets for turtles. Yes, you heard me right. Pumpkins are fruits because they are a product of the seed-bearing structure of flowering plants.

As fruits should only comprise 10 to 20% of their diet, you should give pumpkin in moderation. Avoid feeding pumpkin seeds, stem, and rind.