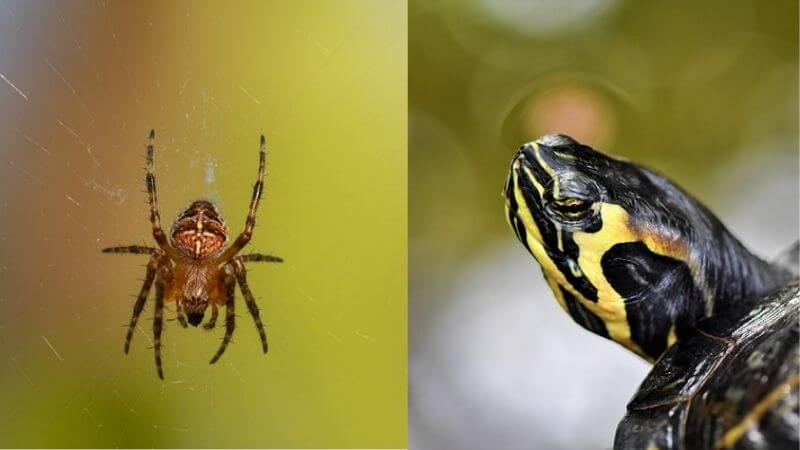 Some pet owners like their turtles to roam around the house. Well, I do. And when my turtle meanders through my kingdom, it definitely encounters varieties of insects.

And often, these encounters become a duel that my turtle wins every time.

But sometimes, I wonder if these insects are safe for him to consume. What about the eight-legged spiders which he encounters every now and then?

I have done my fair share of research and found some helpful insights. And if you, too, are wondering whether turtles can eat spiders, let’s jump right into it.

Yes, turtles will eat spiders when given the opportunity. However, as a responsible pet owner, you shouldn’t let this become a common practice because most spiders are poisonous, making them a potent threat. Furthermore, they carry parasites and have low nutritional value.

Turtles do not hesitate to eat any kind of food.

However, you should steer clear of feeding arthropods like spiders, beetles, scorpions, centipedes, etc.

Here are some reasons why you shouldn’t feed your turtle spiders:

Spider Bites Can Be Fatal

Some spiders have venom in their fangs. And there’s always a chance that a spider will bite your turtle during the encounter.

If the spider is able to inject enough venom into a turtle’s thin-skinned area, like the neck, it can stun the turtle and even cause death.

However, turtles have scutes, and scales, which should protect them from the spider’s bite.

But if the spider is a poisonous one, a turtle can get ill after ingesting it.

Spiders Have Low To No Nutritional Value

Spiders offer little to no nutritional value compared to mealworms, dubia roaches, bloodworms, and other insects. Therefore, it isn’t recommended to feed these arachnids to turtles.

Let me tell you what exactly happened that night.

Did you know that spiders carry parasites, too?

Spiders act as a host to a specific parasitic organism known as mermithid nematode.

The larvae of the nematode directly (by ingesting) or indirectly enter the spider’s system.

These larvae then obtain nourishment from their hosts’ body fluids, digestive glands, gonads, and muscles. But gradually, the spider’s body goes feeble after letting the parasites suck all its bodily fluids. However, the spider isn’t dead yet. It still has one task left to do for the parasites.

These nematodes are water-dependent, and they need water bodies to remain alive after their hapless host’s demise.

So to make the spider search water, the parasites internally dehydrate the spider and make it thirsty.

Thus, to quench its thirst, the spider finds what seems like the only water body in the kitchen, i.e., the cold coffee leftover on the table.

Now the worm parasite comes out of the spider and dives into the liquid. As for the dying spider, it will be barely able to climb out of the cup.

And the spider will die an untimely death.

Despite being dead, the spider still hosts some parasites inside its body. And when a turtle finds that dead spider, it will not hesitate to eat it. This time the larvae get a different host altogether.

But the cycle continues.

By the way, do not drink that coffee!

Which Spiders Are Safe For Turtles?

Which Spiders Are Poisonous To Turtles?

Some venomous spiders that can injure turtles are:

These venomous arthropods could bite and make your turtle sick or kill.

Difference Between Poisonous And Venomous Spiders

Most spiders are poisonous, and only a handful are venomous. There’s a subtle difference between these two.

Any toxin that gets into the consumer’s body by inhaling, swallowing, or absorption through the skin is poisonous.

Whereas venomous is when the toxin is injected into the victim by use of fangs and stinger.

Both kinds of spiders can pose threats to your turtle.

What To Do If Your Turtle Eats A Spider?

Consuming one or two spiders occasionally isn’t dangerous right off the bat. However, it’s still important to observe the turtle for any signs of abnormality.

If you see any alarming signs, such as increased lethargy, bodily changes, and lack of appetite contact the vet immediately.

Turtles consume every kind of insect they can lay their claws on. However, there’s a danger when a spider is involved.

On top of that, it will be hard to differentiate which one is toxic and which isn’t.

Some spiders, like house spiders, are safe for consumption. However, note that they are suitable hosts for parasites known as nematodes.

These parasites have a tendency to transfer their domain from one host to another, making your turtle a susceptible target if it devours the parasite-containing spider.