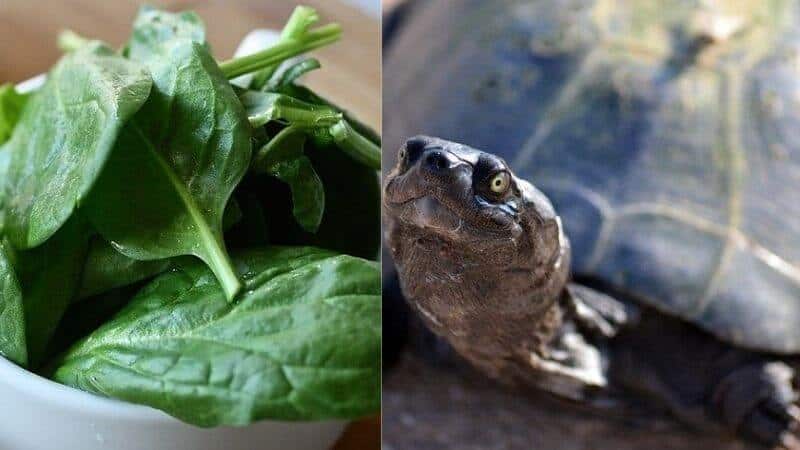 Feeding vegetables have never gone wrong with turtles. But can we say this for every vegetable? What about spinach that’s heralded as one of the most nutrient-rich veggies in the world?

Spinach contains all sorts of vitamins and minerals. But it is also rich in oxalates, a naturally found compound found in almost all plants. It is popular for binding other essential minerals like calcium, preventing your turtle’s body from absorbing necessary nutrients.

So, do the benefits of spinach outweigh its cons? Let’s find out.

Yes, turtles can eat spinach but in modest amounts. However, it is also rich in oxalates, a plant-based compound that prevents a turtle’s body from absorbing essential nutrients. So, it is not recommended to feed spinach to your turtle daily.

Why Should You Feed Spinach In Low Amount?

Furthermore, when a turtle consumes too many oxalates, the nutrients that don’t get absorbed into the body will pass through urine. Over time, the turtle’s kidneys will not be able to filter enough of these oxalates, resulting in kidney failure.

So, you now know the leverage spinach has on a turtle’s health. Now, let’s move on to some benefits they impart.

The nutrition facts reveal that raw spinach has high water content, like every other fruit and vegetable. There is also a high amount of fiber which keeps turtles full for a long time. It also has traces of sugar.

Vitamin A, C, and K are found in spinach. Of them, vitamin A is the most important one for turtles. Vitamin A is a fat-soluble vitamin that helps in the growth and repair of tissues.

Vitamin C has antioxidant properties, which reduce the risk of many terminal diseases in turtles.

Minerals Found In Spinach That Are Beneficial For Turtles

Spinach contains high amounts of calcium, iron, and folic acid. These all three are necessary for turtles to remain healthy. Among them, calcium is the most imperative one. It promotes bone and shell health.

Health Benefits Of Spinach For Turtles

Spinach is rich in vitamins required by turtles.

I have already stressed the importance of vitamin A for turtles. It helps develop healthy skin, mucous membranes, and tissues.

Although there haven’t been songs about vitamin C like vitamin A, it still bears sizable value since it contains antioxidants required to fight diseases.

Another important vitamin turtles require is vitamin K. It is indispensable in promoting healthy bone and shell calcification. In addition, a necessary amount of vitamin K ensures a regular growth rate in juvenile turtles.

Spinach is an insoluble fiber and is not absorbed quickly by a turtle’s body. This helps keep your turtle full for a longer duration.

Alongside keeping satiated, your turtle will intake fewer amount of calories. Feeding spinach with other veggies can be helpful if you do not want your turtles to become obese.

Spinach Is Rich In Calcium.

A single cup of spinach holds about 250 mg of calcium. It is a good source of calcium, but there are repercussions of overfeeding spinach to your turtles. It has a high amount of oxalates, which bind calcium and necessary nutrients to the intestines.

Feeding spinach daily will only do more harm than good. So, you need to mix it with other veggies to keep your turtle on the safe side.

How Much Spinach Should You Feed Your Turtles?

The answer to this question depends on variables like the turtle’s age, health, and size. Another way to feed them is by providing a limited amount to finish within 10-15 minutes alongside other vegetables.

One thing you should know about feeding turtles is that babies and juveniles need more protein. So, they lean towards meat-based diets rather than veggies. But this doesn’t mean that you shouldn’t feed any greens at all. They can still be consumed in smaller quantities.

In the case of adult turtles, they depend more on fibrous food to keep them full. Spinach has a high amount of fiber but a low amount of calories. Lesser calorie means that your turtle will have lower chances of getting obese.

But as mentioned above, you should be aware of the effects the oxalates present in spinach can have on your turtle.

How Often Can Turtles Eat Spinach?

You can feed them once a month, just like the fruits. However, turtles need a balanced diet, and dependency on one food alone will cause several health complications.

How To Feed Spinach To Your Turtles?

You shouldn’t feed spinach directly to your turtles. No food today is 100% organic. So, you need to be extra careful while giving your turtle raw spinach. Let me explain step by step how to give spinach to your turtle.

Take the spinach to the sink and wash it thoroughly. Clean off mud, sand, and other debris. Clip off the worm wound from the leaves.

Spinach is most hard at the stem ends, and turtles will have a hard time chewing them. Chop them off.

Chop Them Into Tiny Pieces.

Turtles do not have teeth and will have to swallow the spinach whole. So, chop them into tiny bits. Smaller the turtle, tinier the spinach pieces.

Yes, you heard it correctly. There’s scientific evidence behind why you should boil spinach. Studies have shown that boiling spinach can drastically decrease the amount of oxalates present in it. It reduces up to 30 to 87% of oxalates.

The oxalate content in spinach has kept every pet owner worrying about feeding it to their pets. Now that the research has proven this, you should be able to provide spinach more often.

Yes, turtles can eat spinach leaves, but you need to wash, clip off the worm wounds and boil them before giving them to your turtles. Also, make sure you chop them into tiny bits to avoid your turtle choking.

Leaves have the most nutrients, so they are beneficial for your turtles.

Stems are the hardest part of spinach. Turtles do not have teeth, so it can be hard for them to chew with their jaws. You can throw off the stem ends and feed the rest by chopping them into tiny pieces to avoid choking.

Spinach juice is high in antioxidants, immensely helping your turtle’s immune strength. But, make sure you have boiled the spinach first to reduce the amount of oxalates.

Yes, baby turtles can eat spinach but in lesser amounts. Spinach is high in oxalates, a compound that binds calcium and other necessary nutrients to the intestine. Feed boiled spinach occasionally along with other leafy vegetables.

Why Is My Turtle Not Eating Spinach?

Just like us, turtles can be fussy about the food they put in their mouth. But there could be several reasons behind your turtle not eating spinach. Maybe they simply do not have a taste for it.

If your turtle isn’t eating spinach, you can mix it with other veggies, which the reptile eats regularly. Even better, sprinkle some commercial food sticks that turtles love.

But remember that turtles require an all-round diet, so do not fixate on giving them spinach only.

Yes, box turtles can eat spinach. They are omnivores and will eat spinach too. However, spinach has high oxalate content, so it will be better to limit the amount and frequency (once a month).

Yes, painted turtles can eat spinach. It is rich in vitamins A, C, and K, along with calcium and iron. But it is also rich in oxalates, so be mindful of the amount you are feeding them. Boiling can significantly reduce the amount of oxalates in spinach.

Baby and juvenile snapping turtles incline towards meaty diets, so spinach might not be their favorite yet. But as they grow older, snapping turtles develop an appetite for vegetables. So, they might eat spinach.

Just like most aquatic turtles, babies and juvenile red-eared sliders mainly depend on meat-based diets. But you can feed them spinach too. It is rich in vitamins and nutrients but has higher oxalate content. Boiling can drastically decrease the oxalate, helping your red-eared slider turtles enjoy their leafy veggies.

Spinach is a wonder food for humans. But the same cannot be said for turtles because it has a higher amount of oxalates. These oxalates bind calcium and other necessary nutrients to the walls of the intestine and prevent their absorption.

However, scientists claim that boiling spinach can significantly reduce the amount of oxalates by 30 to 87%. But it still doesn’t mean that you can give only spinach to your turtle. Make sure you mix it along with other leafy veggies like kale.