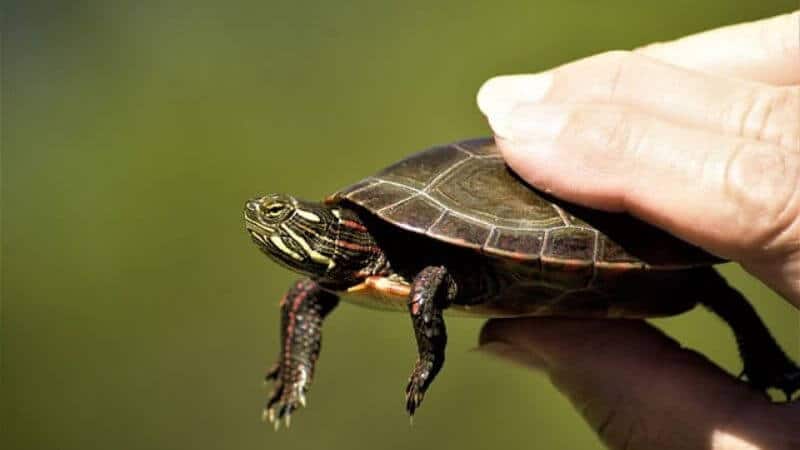 Appearance can be misleading. And it couldn’t be any truer when it comes to a turtle shell. Despite what cartoons show, in real life, a turtle and its shell are not two different bodies. They are unconditionally fused.

Can Turtles Feel Their Shell?

Yes, there are nerve endings and blood vessels in a turtle shell, which is why a turtle will feel all the sensations on its shell. The feeling isn’t that sensitive as it is on their skin, but the turtle will definitely feel your hands when you handle its shell.

You might have noticed your turtles lying still when you stroke their shells. It is because they feel relaxed in most cases. Other times, they are just startled.

They also feel an itch on their back (shell) – and that’s why they find it pleasurable when you gently scratch their shell.

Do Turtle Shells Have Nerves?

Yes, turtles have nerves running across their shells. They have blood vessels, too. The shell is connected with the spinal cord, which is why removing the shell from their body will result in a gruesome death.

If you ever get a chance to observe a turtle’s skeleton, you will see part of the ribcage in their shell area. In fact, their shell is just another extension of their ribcage – so, if the shell is cracked, it is just like breaking a bone in their body.

How The Turtle Got Its Shell?

Before going all gaga over science, let me tell you an interesting bedtime story on how turtles got its shell.

It was a joyful occasion in Mount Olympus. Zeus and Hela were about to get married. So, their son Hermes invited every being from the earth.

All were present except the turtle. The turtle stayed in his cozy home and didn’t attend the wedding.

Knowing this, Hermes got furious and cursed the turtle. He said, “If you so much happen to like staying in your house all day, you shall have your wish granted. From now on, you will be carrying your home on your back till eternity.”

Now, to the facts.

There have been many theories on how a turtle got its shell. However, findings from the fossil found in 2008 in China have shone a new light on how turtles got their shells.

If you believe that turtles got their shell to protect against predators, you are wrong (now). Yes, that’s what we all thought, too.

But now, the Chinese researchers found an old fossil dating back 220 million years ago.

The turtle’s fossil had no carapace (upper shell) and only had plastron (the lower shell). The structure closely resembled present-day lizards.

Turtles in those days lived underground and had to dig using their forelimbs. So, they had enlarged ribs which offered them higher stability while digging.

Over the course, the ribs evolved – moving to the top due to compactness in the lower region. And, this is precisely when the upper shell developed in turtles.

At first, the lower ribs became wider and merged with one another. This led to the development of plastron, the lower shell. Meanwhile, the upper ribs were enlarging, too. Thus, both the lower and upper ribs fused to make the whole shell in turtles.

This nature’s evolution was an origami of its own. This is how the turtle’s shell came into existence—apologies to Aesop.

What Is Turtle Shell Made Of?

The turtle shell is mostly made up of calcium deposits – giving it a bony structure. Along with it, there are scutes in the upper shell which is made up of keratins – the same elements our nails and hair are made of.

The shell also has an epidermis layer. This layer is present in all three shell parts, i.e., carapace, plastron, and scutes. It provides support to the shell and is thicker in the vital parts of the shell. It also prevents deformation of the shell if in case of external pressure.

Within the shell, several ribs give it a rounded structure.

There are some other non-bony parts in a turtle’s shell, too. Mucus films present inside the shell helps to lubricate the joints – easing locomotion.

The upper shell is called the carapace, and the lower surface is known as plastron. The scutes are present on the carapace. As they grow older, turtles shed these scutes.

Let me explain them in detail.

The dorsal part or you could say the upper shell, is termed as carapace. It consists of several ribs fused with a dermal bone. They have dermal plates upon which the ribs and dermal bones are connected.

A keel runs from the front to the back of the carapace. Scutes cover the surface.

The flat region or the bottom shell of the turtle is known as plastron. It covers a turtle’s belly. The male turtles have concave plastrons, whereas the females have flat. The concave shape helps the males to ride on a female turtle’s shell while mating. And the female’s flat-shaped plastron provides more space to hold eggs.

Scutes are present in the turtle’s carapace. These are made up of keratin, which also makes up hair, horns, and nails. Turtles shed these scutes as they grow, and a new layer keratin forms above the existing scutes.

Too much protein in the diet and bodily deformities can cause hyper-growth of the scutes, commonly known as pyramiding in turtles.

How Hard Is A Turtle Shell?

Turtles have a tough shell that can withstand 200 times their weight. So theoretically, even 1000 pounds of pressure won’t be enough to break a turtle’s shell.

However, they are not entirely invincible. Turtles in the wild often end up with cracked shells from falling or the constant bickering from predators’ sharp jaws. For reference, saltwater crocodiles can exert 3700 pounds of jaw force.

Shell rot is another factor that can soften a turtle’s shell. Improper diet and unsuitable habitat often cause shell rot in turtles.

How To Keep A Turtle Shell Healthy?

Despite having a tough shell, turtles are susceptible to shell rot and similar diseases.

A soft shell or withering scutes are some signs of an unhealthy shell.

How Can You Keep Your Turtle’s Shell Healthy?

As your turtles’ shells are made up of calcium and keratin, you need to provide them food rich in these minerals.

So provide them calcium-rich pellets, as well as vegetables like kale, broccoli, and aquatic plants.

Here’s a link to calcium-rich Nutri Sticks my turtles love:

You need to arrange a proper basking area for your turtles to soak in enough vitamin D. Lack of this nutrient causes shell rot. So, don’t pinch pennies when buying basking light and platform.

Here are my personal favorites:

Turtles are messy pets. The rate at which they excrete and pollute the water is alarming. So, carry out water changes regularly.

And clean the tank every three weeks. Also, don’t forget to brush off the waste from the filter.

A reliable filter will spare you a good amount of elbow grease, but don’t skip on water changes. They help to keep your turtle’s habitat hospitable for a longer period.

Although mentioned at last, this is the most vital factor that determines the shell’s health. Turtles spend most of their time in the water – so, the parameters should be kept at optimum level.

Here’s a quick look into ideal water parameters for a turtle tank:

Final Words On Can Turtles Feel Their Shell

A turtle’s shell is crucial to its survival. Most people mistake it for just a hardy enclosure for protection, but they are in fact extension of their ribs. That’s not all – a turtle shell comes complete with blood vessels and nerve endings.

So, your turtle is capable of feeling a wide range of sensation on its shell.

And yes, they do die if their shells are removed from their body.

Diseases like pyramiding and shell rot are common in turtles. So it is necessary to care for your turtle’s shell.