Can Turtles Get High? Here’s Why You Shouldn’t Get High In Your Turtle’s Presence 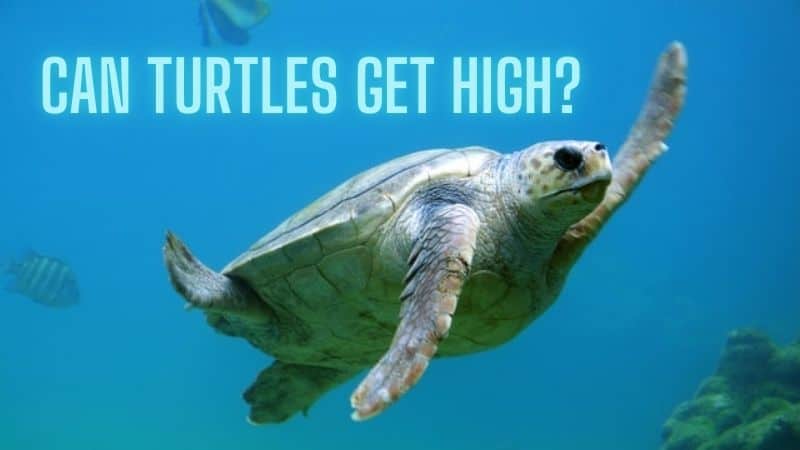 Jaguars. Horses. Bees. You’d be surprised to know there’s a whole bunch of animals that can get more high than we do. From locoweed and alcohol to shrooms and urine — the stimulating agents in the animal kingdom are just as quirky as the animals that take them.

So, where do turtles fare? Is it true they get high on jellyfish? Let’s find out all the answers today.

Can Turtles Get High?

Yes, turtles can indeed get high. As reptiles, turtles have cannabinoid receptors 1 and 2, which allows them to be stimulated and sensitized by cannabis and other similar hallucinogens that contain THC.

Before moving to other interesting questions, I’ll quickly explain what THC is and how it works for those who aren’t sure.

What Is THC? How Does It Work?

THC, also called Delta-9-Tetrahydrocannabinol, is the psychoactive ingredient found in marijuana plants. THC can stimulate the brain to release dopamine – leading to a sense of euphoria. The effect kicks in usually 10-30 minutes after ingestion and can last up to 3 hours.

The marijuana plant, also referred to as cannabis, contains up to 60 individual cannabinoid compounds. However, only THC is known to have psychoactive effects.

Another popular cannabinoid is Cannabidiol (CBD), which’s best known for its medicinal properties like helping chronic illness, insomnia, anxiety, and so on. Thus, they’re often used for pets like cats, dogs, and even horses in the forms of oils, chews, and treats.

As for turtles, there are neither scientific studies to underpin the benefits of CBD nor curated products available in the market.

So, I’d suggest steering clear of marketing gimmicks with claims to ‘soothe’ and ‘heal’ your turtle in the name of natural wellness.

What Can Get Turtles High?

There’s no concrete evidence on if and how turtles get high in the wild. It’s also unsure if they do it on purpose. However, since they have C1 and C2 receptors, THC can make your turtle high. So, anything that contains cannabinoids, from marijuana and black truffles to cacao and black pepper, has the potential of making your turtle high.

As for CBD, scientists aren’t 100% sure how it interacts with the Endocannabinoid system. However, it’s certain that CBD doesn’t bind to C1 and C2 receptors the way THC does.

How Do Hallucinogens Affect Turtles?

Since turtles aren’t too expressive, it’s hard to ascertain the effects of THC. They won’t walk backward or have visibly red eyes. But if you are really aware of your turtle’s personality, you might see subtle differences in their behavior. Your best bet would be lethargy and drowsiness.

That being said, I can’t possibly think of any situation where your pet turtle gets high unless a stack of marijuana ‘accidentally’ falls into their tank.

In many forums, I have seen queries and experiences about deliberately getting your turtle high by exposing them to the smoke, with some even going as far as suggesting to inject THC into their bodies.

By no means, that’s the right thing to do. As a responsible turtle owner, you should make sure that there’s not even one instance ever where your turtle gets high forcefully or by accident.

That’s because there are no substantial studies that have been conducted to study the effects of marijuana and THC on turtles. You never know how it will affect your pet reptile’s health immediately or in the long run.

Experimenting yourself to see can turtles get high can lead to lifelong health issues for your turtle and even death in some cases.

Do Turtles Get High On Jellyfish?

Sea turtles that consume jellyfish usually go for the tentacles instead of the nutritious bell. And while that’s a strange choice for a meal due to the painful sting that’ll shortly follow, the answer is no. None of the seven recorded species of sea turtles are known to consume jellyfish to get high.

When humans are stung by jellyfish, the skin contact triggers small, harpoon-like structures called nematocysts that inject venom into the victim’s skin.

But turtles are less vulnerable to these nematocysts due to scaly skins. The only vulnerable regions are its eyes, which are effectively shielded with flippers.

After all, it seems like we aren’t the only animals on the planet to like a little bit and a sting in our meals.

Conclusion On Can Turtles Get High

In short, the answer to can turtles get high is, “yes, they can, but they shouldn’t.”

As reptiles, turtles have cannabinoid receptors 1 and 2. These receptors allow them to feel stimulated and elusive and get high on THC, the psychoactive agent present in marijuana.

But there’s no documented case of turtles getting high on any stimulant by themselves in the wild.

Likewise, there is no adequate scientific data and research that studies the effects of psychoactive agents like marijuana on turtles. There could be adverse reactions, and we wouldn’t know anything since turtles aren’t expressive creatures.

Thus, by all means, you should never let curiosity get the best of you and experiment to see can turtles get high or not.