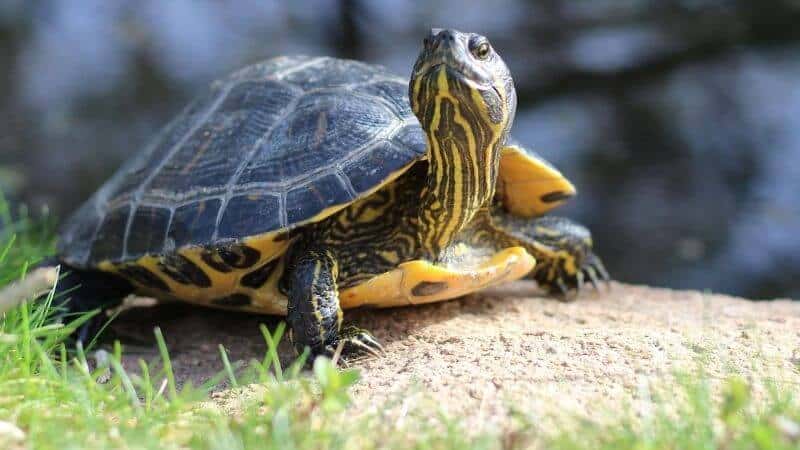 A turtle’s need for hydrating its body is natural. However, they need land as well. Sea turtles, in general, only use land when they need to lay their eggs. But other freshwater turtle species need land for basking and foraging too.

So, the big question is, can turtles live on land? Most turtles are aquatic/semi-aquatic animals, and even though they can survive for hours on land, they need to go back into the water to rehydrate themselves. But there are also exceptions like Desert Box Turtle. Unlike other turtles, they spend most of their time on land. However, they too need water for hydration.

Why Do Turtles Need Land?

Both land and water are equally crucial for a turtle’s wellbeing. A turtle needs land to bask, breathe, forage (for terrestrial turtles), and lay its eggs. The land also offers refuge and safety when the water’s too hot, too cold, or the parameters aren’t just right. Even sea turtles, who rarely bask, swim for thousands of miles to reach land for nesting.

To dive deeper into this topic, here are some of the reasons why turtles need land.

Turtles have to come ashore for nesting. Even the sea turtles aren’t exception to this. Though these turtles mate in the sea, they will come to the beaches and dig holes about 18 inches where they lay their eggs. The number of eggs can be anywhere from 50 to 100 in a single hole. After laying, they will bury the nest to avoid predators feeding on their eggs.

For Ease In Breathing

Turtles need land to breathe. They need to come to the surface for breathing as they don’t have gills like fish. After spending hours in the water, a turtle needs land to rest and breathe without struggling to stretch its neck out of the water while breathing.

Turtles like Wood turtle, Snapping turtle, and several Box turtle species actively search for food on land. They eat berries, plants from the marshes, insects found in the nearby ecosystem, and etc. These strong foraging characteristics aren’t unusual in a terrestrial turtle.

Researches have shown that Snapping turtles travel far from their home to the new lands for better forage. So, we can see how vital land is for these turtles.

Here’s a clip of a female snapping turtle crossing road.

Another reason turtles need land is to bask and enjoy some UV lights. UV rays help in preventing skin diseases in turtles. If your turtle has white spots on its body, it could be due to a lack of Vitamin D, which is achieved through basking. Therefore turtles need land for basking.

Some Turtles Need Land For Hibernation

Did you know that a turtle will hibernate on land when the temperature drops rapidly? When there’s a sudden drop in temperature, a turtle’s body won’t be ready to drop its metabolism right away and go into hibernation. In response, the turtle will hide in a thicket of shrubs and dead leaves to warm its body before hibernating. Then he will dig himself a hole around 8 to 14 inches deep and bury himself on the land.

So, the myth of turtles hibernating only under the water is not true. They also bury themselves in the ground and hibernate.

When The Water Temperature Is Too Hot Or Too Cold.

If by any means the temperature of the water increases, turtles will find it hard to adapt and have to get out of the water. This usually happens with a newbie turtle keeper whose water heater is out of order. Also, if the water temperature is too cold, the turtle will come out to the land to warm its body.

Thus, when the water’s temperature is not right, coming out of the water onto the land is the only way a turtle can maintain its body temperature.

Due To Bad Water Parameters

Turtles are messy creatures. As a turtle owner, one always needs to keep an eye out for excessive buildup of poop and leftover food. If you fail to maintain proper hygiene in the tank, there are high chances that the water parameters will be disturbed. For instance, levels of harmful compounds like nitrate, nitrite, and ammonia will spike. As a result, your turtle and other tank mates’ health will be seriously compromised.

In the wild, whenever turtles sense something’s wrong with the water, they’ll venture out of it and seek refuge in the land. They will then only dive when they need to rehydrate their bodies.

Can A Pet Turtle Live On Land?

If the turtle you are keeping is a Box turtle or other terrestrial species, it will naturally spend most of its time on land. So, yes, your pet turtle can live on land. But just like how every creature needs water, you need to make sure there’s abundant water for it to drink and hydrate its body at all times.

However, if you have a freshwater turtle like a Red-Eared Slider, Painted turtle or Clemmys, It needs water to live in because these species spend most of their time in the water. Unlike Wood turtles and Box turtles, these turtles can only digest food when they are inside water.

Which Turtles Live On Land?

Terrestrial turtles like Wood Turtle, Bog Turtle, Common Box Turtle, Eastern Box Turtles and other Box turtle species live on land. Although they too need water to rehydrate their bodies, the dependency on water is considerably low compared to other aquatic species.

Why Do Turtles Live In The Water?

During the winter, the surface of a pond will freeze; however, below the ice, the water temperature will be relatively much warmer than the surface. This is why turtles hibernate at the lake’s bottom when the surface is frozen during winter.

Here’s an interesting tale from West Africa on why turtles live in water.

Thousands of years ago, turtles used to dwell on land. They never went to water and weren’t swimmers as they are now. Among these turtles was one clever turtle that tribal hunters caught. These tribal men had got themselves a turtle for the first time and didn’t know how to eat it.

So the clever turtle overheard them saying, “How shall we cook him?”

Finding the opportunity to escape, the turtle said, “You will have to kill me first”

“And how do we do that? Should we use sticks to break your shell?” asked the chief.

“No, my shells are hard and won’t get broken by the sticks. It is better if you drown me in the river and do as you shall”, said the turtle.

“Great Idea”, exclaimed the chief. They then carried the turtle to the river nearby and threw him in the water, thinking it would drown.

But to their surprise, the turtle’s two eyes popped out of the water, and he was laughing at them.

The laughing turtle said, “Foolish people, don’t hasten on taking out those cooking pots. From now on, I’ll spend most of my time in the water to be safe from you lots.”

Since then, the turtles started spending most of their time on the water rather than land.

Final Words On Can Turtles Live On A Land

Turtles are undoubtedly one of the most fascinating species to grace the planet. Today, there are 356 known species of turtles, including diverse terrestrial, aquatic, and semi-aquatic species.

Terrestrial turtles dwell most of their lives on land. They only need water to hydrate themselves. They will find their food on land and will hibernate by burying themselves in the ground.

On the other hand, aquatic turtles need water to feed, live and hibernate. They only come out of the water for basking and laying eggs. So, these aquatic turtles spend most of their time in the water.

Now that you know that terrestrial turtles also require water while the aquatics need land, both the land and water have significant value in each type of turtle.