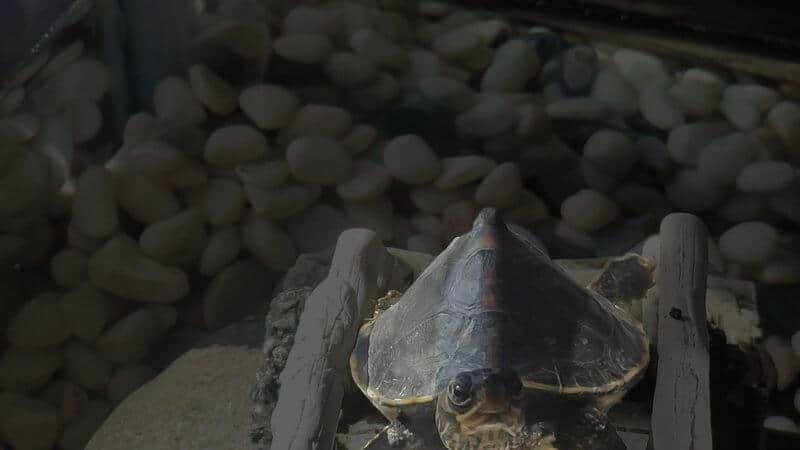 Last week, I happened to notice my turtle moving even when the lights were off that night. He was walking as if he could see in the dark and feeding on the treat I placed before turning the lights off. That led me to wonder–Can turtles see in the dark?

Here’s what I found.

Do Turtles See In The Dark?

Yes, turtles can see in the dark, but not as clearly as your dogs or cats. Their eyes function the same as ours, so just like us, they can see after staying in the dark after some time. Their eyes adjust to the darkness and will dilate to help them see even when there’s only a little light in the aquarium.

Yes, turtles can see colors just like us. In fact, they can see one more color than humans. We humans can only perceive three wavelengths, i.e., red, green, and blue. This combination of three RGB colors results in over a million colors.

So, Why Is A Turtle Able To See More Colors Than Us?

The reason behind a turtle’s ability to see more colors than us is because of a gene called CYP2J19. This “redness” gene helps animals such as turtles to discriminate and signal different colors in the red long wavelength. While we humans can only perceive crimson and scarlet, animals with this gene can perceive color variations in between them.

How Do Turtles See In The Dark?

Turtle’s vision is the same as humans, so they cannot see immediately once you turn off the lights, just like us. He will need to adjust his iris to let more light into his eyes.

This will take a moment, but once he gets accustomed to low light, he will find his way in the dark. Also, the red hue is a bit strong in lower lights, which means he can view things more precisely than humans in low light.

So, Can Turtles Really See In The Dark?

Seeing clearly in the dark is a relative term. Even the extreme nocturnal predators cannot see clearly during the night. No matter how much they are famed for seeing with their shiny eyes, a tiger won’t see as clearly as we think during the night. But they have far better vision than turtles in the dark.

This is because of a feature called tapetum lucidum. This is a retroreflector which is behind the eyes of nocturnal hunters like cats and tiger. They are found in dogs too. This retroreflector multiplies the visible light in their vision, which increases its photoreceptors. To put it simpler, it reflects the light through the retina, which acts similar to a mirror.

What Other Organs Do Turtles Use To See In The Dark?

Although the turtles do not have eardrums or tympanum, they can pick up the lower frequencies just like the fishes in the water. This helps them feel the transition of water current and avoid incoming obstacles in the dark. Also, this allows them to swim away if any of the predators are around.

How Do Turtles See Underwater?

As humans, we have a short vision underwater. Yes, we might be able to see but only for a few moments and up to certain meters only. However, a turtle can see inside water for a much longer distance and longer duration.

Turtles have been living in water for thousands of years, which has evolved them to survive in water. Because of the evolution through adaptation, turtles’ eyes produce tears like jelly that cover and protect their eyes from salt and harmful bacteria helping them see underwater.

These tears aren’t the same as tears that come out when we cry. These tears keep their eyes hydrated while swimming. And turtles do not cry or shed tears due to emotional reasons.

However, turtles do have a hard time swimming in polluted water as they won’t see clearly. So, along with their eyes, their ability to feel the change in water pressure helps them find their way in dirty water.

This hearing ability helps them while searching for food in the deep-sea where there’s low light.

How Can You Tell That Your Turtle Has Night Vision Or Not?

Before testing, you need to know what “tapetum lucidum” means. It refers to a membrane in the eyes that reverts the photons of light in the eyes, which helps certain animals see even more contrast. Thus, this is the reason why dogs and cats have shiny eyes when you project light into their eye.

The same can be done with turtles. You just need your phone to take a photograph of your turtle in the dark. Turn the camera’s flash on and take a shot. Check the photo whether your turtle’s eyes are sparkling. But let me give you the spoiler. They do not possess tapetum lucidum, so their eyes won’t shine like dogs and cats.

This proves that your turtle doesn’t have night vision.

Should I Leave The Lights On For My Pet Turtle During The Night?

If you really want to keep a light, get a zero watt light that glows dimly in an aquarium. This won’t disturb your pet’s resting schedule.

How Long Should I Leave Lights On For A Turtle?

If your aquarium gets a lot of natural light during summer, you might not need extra hours of light for your turtle. However, during winter, the daylight gets relatively shorter, so you might have to turn on the lights for a couple of hours more.

It is said that turtles will require at least 10-12 hours of light to thrive. Turtles need a warm environment, so lights in the winter will keep them happy. Also, turtles like to bask under the lights as they suppose them as heat provider.

YES! Turtles can see humans. They identify colors better than us, so even if you change your clothes, they will easily recognize you.

But, if your tank is contaminated with pollution, they won’t recognize you. Not only does it limit their visibility, but it also can cause permanent vision loss along with other health issues.

Final Words On Can Turtles See in The Dark?

As I mentioned before, seeing in the dark is a relative term. Turtles see in the dark, but not as clearly as cats and dogs. This is due to the absence of Tapetum Lucidum, which helps in reflecting light in dogs and cats. Turtles need time to adjust to their surroundings when it is dark. They will use their eardrums to help them feel the change in water pressure and help them avoid predators and find their way in the dark.

The turtles can also see more shades of red than us, meaning they can easily recognize their owners. Putting a light in your turtle’s aquarium is a good idea for winter, but not during summer as this only hampers their sleeping pattern. Give your pet enough rest so you can see him doing his thing during the daytime.