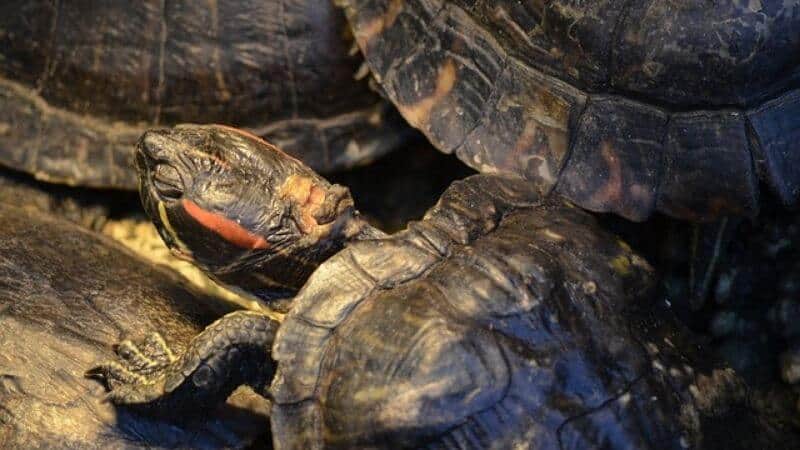 You might wonder if turtles have the same sleeping pattern as humans. We fall asleep easily when our room is pitch dark (at least, I do). So, is it the same for the turtles?

In this article, we will explore the sleeping patterns of turtles. Let’s begin.

Can Turtles Sleep In The Dark?

Turtles are diurnal creatures. This means that just like us, they are active during the day and sleep at night. They can sleep for 4 to 7 hours if the tank is dark. Bright lights wake them up and disturb their sleep. So, it is better to turn the tank lights off at night.

And when they wake up after their sleep, they will go around in search of food. But, as they have poor vision, it will be challenging for them to scavenge.

Turtles do not have night vision. Their eyes function like ours, so they can see as much as we can in the dark. Their pupils dilate and adjust their vision to see when there’s little light in their tank.

So, it can be said that turtles cannot see as clearly as some nocturnal animals do during the night.

But, even though these predators have so-called night vision, they cannot see as much as we presume them to during the night.

Nighttime is the best time for turtles to get their sleep. Research has shown that dark ambiance can help turtles regain energy much faster. It also suggests that the baby turtles grow rapidly during nighttime.

If you ever check on your turtles, you will notice that they start to slow down their activity as the night falls. They will be dozing when the lights are off. And if it’s pitch dark, you can even hear them snoring!

Why Is My Turtle Shedding White Skin? Is It Dangerous?

So, How Long Do Turtles Sleep?

Every turtle species has a different sleeping duration. And it also depends upon several factors like age, habitat, temperature, and climate. Usually, turtles sleep about 4 to 7 hours at night. And during the daytime, they will spend equal time basking, which is similar to taking a nap.

Baby turtles, on the other hand, sleep more than adults.

How Do Turtles Sleep At Night?

Turtles will go down to the bottom and dig the substrate partially or fully to bury themselves. Some turtles search for dark places or find spaces below plants and leaves to hide and cover them while sleeping.

Turtles like snapping turtles like to cover themselves with mud and get their sleep underwater. Other semi-aquatic species want to lie below logs and debris in shallow waters.

Turtles in the wild do not have the luxury of UVB bulbs. They will only bask during the day when the sun’s up. So, the captive turtles too show the same behavior and seldom bask during nighttime.

Furthermore, it is recommended that you turn off the basking light at night. Otherwise, this will only disturb your turtle’s sleep.

Turtles like sleeping underwater at night. The temperature drops low during the night, which helps them lower down their metabolism and allows them to function with less oxygen.

Turtles And Sleeping Lights. Do They Need It?

No, turtles do not need sleeping lights. They are shy creatures and prefer complete darkness at night. However, there are cases of newer turtles escaping the enclosure when the night falls.

So, if you want to check on your turtle at night, you can install sleeping lights in your turtle tank. However, make sure the brightness is dim enough not to disturb or wake the sleeping turtle.

Some turtle owners often turn on the heating bulb to maintain tank temperature at night. But turtles seldom climb to the basking platform at night, so keeping heat bulbs on at night isn’t recommended. The water heater will suffice.

However, the time will come when you have to keep the heating bulbs on during nighttime. When a turtle is pregnant, she will show unusual behaviors like waking up in the middle of the night and ascending to the basking platform. She will also pace around the tank.

So, if you have a pregnant turtle, you can keep the heat bulbs on at night.

And if you do want to set up night lights, I recommend going for soothing lights to help your turtle have a whole night’s sleep. Blue and red are scientifically proven to help animals sleep at night (applies to humans, too).

It will be even better if you get night viewing lights or infrared lights. These lights emit minimum brightness while raising the temperature inside the tank.

How To Prepare Right Sleeping Conditions For Turtles At Night?

During the daytime, you can turn on the heating lamp for about 10 to 12 hours. And at night, you need to turn it off to let your turtles sleep peacefully. So you can turn them off at around 8 to 10 pm.

Experts say that the turtles need lower temperatures at night to get proper rest. So, lower the temperature by a few degrees. However, if you drop the temperature too low, they will find it hard to adjust and prepare for hibernation.

Turtles like to find cover while they sleep. So, have plants and driftwoods in your tank to offer them the canopy.

Even if you see your turtles becoming active at nighttime, you need not turn on the lights. They are probably rummaging and trying to find food in the tank. Newer turtles often do this to find their suitable turf to sleep.

Leave some food for the night in case your turtle gets hungry and starts scavenging.

The location of the tank also plays an important role in how well the turtle will sleep. Keep the tank in a quiet place. It will be better if there’s less flow of people in that particular room.

Should You Turn Off The Heater At Night?

No, you shouldn’t turn off the heater at night. However, experts say that lowering the temperature by a couple of degrees helps turtles relax and sleep well.

Typically, the tank water can be anywhere from 75 to 85 degrees Fahrenheit. So, you can lower it by 2-3 degrees at night. Turtles will sense this drop and will decrease their metabolism rate. So, they go into a resting stance and sleep for an extended period.

Where Do Turtles Sleep?

A turtle will have 2 to 3 favorite spots to nap. Turtles can sleep anywhere. You will find them sleeping on the basking platform, water surface, or underwater.

On the basking platform, you will see them stretching their legs and necks to get maximum heat if the light is on. They also like to sleep on the rocky precipice, if there’s any inside the tank. I have found mine sleeping on top of driftwoods, too.

You cannot be sure about where your turtle prefers to set its bed. Just maintain the water temperature, and it will be okay to sleep anywhere.

Most turtles like to bury themselves under sand and mud while sleeping. Painted turtles, red-eared sliders, musk turtles, and mud turtles display such behavior.

On the water surface, they will find the right buoyancy to float and fulfill their nighttime rest.

Why Aren’t My Turtles Sleeping At Night?

Factors like too much brightness in the tank, poor water conditions, stress, and hunger can cause your turtle to stay awake at night.

Too Much Brightness Inside The Tank And Room Keeps Turtles Awake.

Just like us, turtles will have a hard time sleeping when the lights are on at night. They will confuse it for daytime and will not try to go into full sleeping mode. So, turn the lights off during the night to help your turtles sleep.

When the water parameters aren’t suitable for turtles, they will stay awake at night. Check parameters such as nitrite, ammonia, nitrate, chlorine, water temperature, and pH value. If these variables aren’t clocked in at optimum levels, turtles cannot sleep.

Baby turtles get hungry quickly. This is because they have faster metabolism compared to adult turtles. And when they are hungry, they will stay awake and search for food all around the tank. Sometimes, you might even hear them make noise asking for food.

So, always leave some food for your turtles before turning off the lights. Midnight snacks help them satiate hunger and help them sleep.

Stressed Turtles Will Not Sleep At Night.

There can be several reasons a turtle can get stressed. First, turtles find it hard to adjust to a new environment. This usually happens when you introduce turtles to a new tank.

Turtles need to scout and make sure there are no threats nearby. This can keep them awake for a couple of days. However, they will eventually adapt and sleep well at night.

Another reason turtles get stressed is when they are sharing the space with other residents. Older male turtles display dominance in the tank by marking their territory – thus, the newer ones find it hard to claim a resting place.

If the area where you housed your turtle is too noisy, your turtle can have difficulty sleeping. So, keep the tank in a relatively less noisy place.

If you ever wondered do turtles hear sounds or perhaps, listen to music, check out this article: Do Turtles Like Music? The Science and Myths Behind It

When a turtle becomes pregnant, she will show some newer, strange behaviors which are hard to explain. She will keep scratching the glass, dig through the substrate, stop basking or excessive basking, and remain awake at night. There’s nothing you can do about it. Just have her properly fed and maintain optimum water parameters.

Why Do My Turtles Sleep During Daytime?

If your turtle is in the basking spot and closing its eyes, it is probably just basking and resting. Unlike nighttime, turtles do not go for deep sleep during the day.

Unless the water temperature is too cold, they will not go into slumber during the day. They might just be resting with their eyes closed.

However, if the water is too cold for their liking, their body automatically prepares for brumation. And this is why you sometimes catch your turtle dozing off midday.

Why Are My Turtles Trying To Escape Enclosure At Night?

This is a common problem faced by many pet owners. A turtle trying to leave the enclosure at night can mean several things. It could be due to poor water parameters, lack of space, pregnancy, or stress.

When the water parameters aren’t met, turtles will try to escape the enclosure. This is why you need to check variables such as nitrite, ammonia, chlorine, and pH value.

Spike of such content in water can also cause turtles to escape enclosure at night.

Final Words On Can Turtles Sleep In The Dark

Turtles and humans share many things in common. And sleep is one of them. They also need proper nighttime sleep to rest and regain their energy.

Just as we cannot sleep in a room full of bright lights, turtles also find it hard to sleep in such conditions. So, you need to turn off the aquarium lights and let them have their privacy at night. For temperature maintenance, keep the heater on.

What To Do If A Turtle Lays Eggs In Your Yard? Will They Hatch?