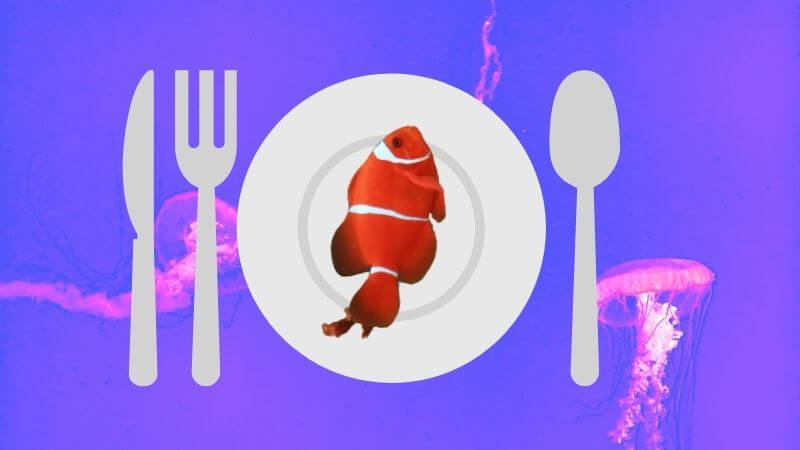 Do you know clownfish make up over 43% of the worldwide marine ornamental trade? And 75% of these fish are captured from the wild. More than one million clownfish are caught and compelled to live the rest of their lives in captivity every year.

The aforementioned facts and figures make me wonder – do all clownfish caught or bred make their way into aquariums? Or do some end up as a part of gourmet meals on dinner plates?

This is going to be an exciting read. Buckle up!

Can You Eat Clownfish?

No, you cannot and should not eat clownfish. The mucus coating they produce hasn’t been studied enough to know whether it’s deemed safe for human consumption or not. On top of that, they’re scaly, bony, and would cost an arm and a leg to make a meal out of.

One dude on a forum reported that clownfish are delicacies when put on a bamboo skewer and fried. I don’t know how serious he was, but I sure hope he was just kidding!

Below, I will briefly touch on a few reasons why it’s best not to eat clownfish. Leave the poor guy alone already!

As you already know, all clownfish species share a symbiotic relationship with sea anemones. These fish don’t get stung by anemones’ poisonous tentacles because they produce a thick mucus coating which makes them unsusceptible against the anemone’s toxins.

As of now, we don’t know what exactly this mucus is made of and how. While some scientists think the mucus coating is based on sugars rather than proteins, we still don’t have conclusive, assuring answers.

Therefore, the general consensus is that this coating can be harmful to humans if ingested. Again, we don’t have proof for this either, but it’s always better to err on the side of caution, isn’t it?

Clownfish Are Small, Bony, And Scaly

Even the biggest clownfish – gold stripe maroon clownfish – grows only 6 inches long. And the likes of percula and ocellaris just grow up to 4 inches and so. So clownfish would make very small meals.

On top of that, they’re reported to be scaly and bony.

Small, bony, and scaly: 3 qualities that make any fish “flawed” to become a good food source. And your homeboy ticks all the boxes when it comes to being a less-than-ideal meal choice.

On average, clownfish cost anywhere between $15-45. Let’s not even get started about designer varieties – they cost $100 or upwards.

Unless you break a bank or were born with a silver spoon, clownfish would make super expensive meals. On top of that, given that they’re tiny, bony, and scaly, you’d need more than just 1 clownfish – I’m assuming 6 or more – to make a sizable meal out of them.

And I’m sure nobody’s willing to splurge hundreds of dollars on food that they don’t even know is edible or not.

If you are still not convinced that you shouldn’t eat clownfish, I’m sure the next segment will change your mind.

In the wild, they enjoy a pretty rich diet. They graze on algae to their fill and snack on planktonic fish eggs, fish larvae, isopods, zooplankton, and polychaete worms.

And I’m pretty confident you don’t want to know what any of the aforementioned creatures or algae taste like!

When I dug through forums to see if people have actually devoured clownfish or not, I came across some amusing answers. There were two schools of thought. So I have pooled together some of the responses for you!

Can You Eat Clownfish? Real Answers By Real People!

Note: All the comments written below solely belong to the respective authors.

“It’s highly unlikely anyone would have the $$$ to buy a meal that expensive.”

“I guess I don’t think eating clownfish is that weird. Most pets we keep are food to people in other cultures.”

“If you don’t have a problem eating tuna, salmon, perch, etc., then why would eating clownfish be a problem?”

“I personally wouldn’t eat clownfish. The cost would be ridiculous, and they would be tinier than smelt, and you know how bony smelts are.”

“If I were in another country and it was a dish there, I might give it a try assuming the price is reasonable.”

“There’s something about shipping at a pet store for food that doesn’t sit well with me!”

Okay, that was the audience poll! The choice is yours to make now.

No, clownfish aren’t known to be poisonous. That’s why they’re the most loved pet fish species in the world. However, like any other fish, they can be carriers of other deadly pathogens harmful to humans.

Can Clownfish Hurt You?

Yes, clownfish can hurt you with their bites during feeding and cleaning. However, their bites are reported to be only mildly painful.

These fish are pretty possessive about their territories. So, any object (in this case, your hand) that enters the tank is perceived as a threat.

What Do Clownfish Eat?

In the wild, clownfish are big-time algae feeders. In addition to feeding on algae that grow on coral reefs, they also snack on small invertebrates, planktonic fish eggs, fish larvae, isopods, zooplankton, and polychaete worms.

And here’s a list of food they can eat in captivity:

Related: How Often To Feed Clownfish? Risks Of Underfeeding!

Can You Eat Goldfish?

Yes, you can eat goldfish. But goldfish don’t taste good – they’re known to have a muddy taste. Also, they can carry harmful diseases and are hard to debone.

If you want to know what real people have to say about how goldfish taste, I’m sure this article will interest you.

Can You Eat Lionfish?

Yes, you can eat lionfish. In fact, NOAA scientists are now encouraging people to eat lionfish as a measure to mitigate these invasive fishes’ impact on reef communities.

Once you strip off its venomous spines, clean it, and filet it, you can cook and eat it like just about any other fish.

Can You Eat Clownfish In Minecraft?

Yes, you can eat clownfish in Minecraft. Note that they’re edible but not cookable. Clownfish can be obtained by fishing in any water with a fishing rod. It restores 0.5 hunger points when eaten.

Final Words: Can You Eat Clownfish?

Frankly, the answer to this question depends on what direction your moral compass is facing. Clownfish aren’t known to be toxic to humans. But I still didn’t come across a single account of anyone eating clownfish.

There’s a thin line between fish we raise as pets and livestock. On top of that, clownfish are slimy, bony, tiny, and scaly. And they’d primarily taste like the food they’re eating.

Therefore, my advice here would be to give clownfish a miss. Don’t eat them.