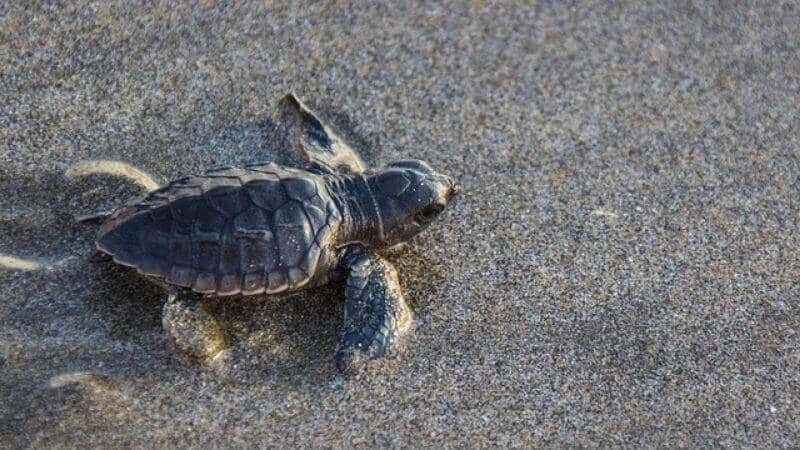 In total, there are 7 known species of sea turtles in our ocean. They migrate thousands of miles between their foraging waters and nesting grounds. All these seven species are now endangered species, and marine conservation organizations have levied strict rules on selling, hunting, or keeping them as pets.

Sea turtles do not stay the size of other freshwater aquatic turtles. They will outgrow those aquatic turtles by far, weighing up to 1500 pounds. So, only marine museums and walk-in aquariums have glasses to restrain a 1500 pound head-butt from a turtle.

Why Are Sea Turtles Endangered?

Over the last 200 years, humans have poached sea turtles for their skin, shells, meat, eyes, and eggs. Different cultural beliefs from all over the world have resulted in such poaching.

In the 1700s, the sea turtles were considered to be fine dining for the aristocrats in England.

In China and Japan, people poach them for their shells to make ornaments.

In West Africa, sea turtle’s eggs are dug from the beaches and eaten as a source of protein.

So these cultural beliefs and way of life in the coastal regions are the reasons why the sea turtle’s population has widely been threatened.

In the modern era, humans have occupied everything. Once the basking and nesting areas for turtles have now been converted into beaches for humans to bask on. The presence of humans on these beaches has made their eggs vulnerable as humans have this curious nature to meddle in others’ business.

Another one of our doings is climate change, which is also largely to blame as it severely influences sea turtles’ nesting sites. The growing temperatures alter the sand temperatures, which in turn alters the sex of the hatchlings.

But, with the outbreak of COVID-19, turtles are once again returning to the beaches to bask and nest. In Thailand, the record for the highest number of turtles ashore occurred in 2020 during the lockdown.

How Many Species Of Sea Turtles Are There?

Almost all species of sea turtles are now classified as endangered, with 3 out of 7 existing species being critically endangered.

The IUCN (International Union For Conservation Of Nature) has listed all these 7 sea turtles in a category with relation to their population.

Where Do Sea Turtles Lay Their Eggs?

Though sea turtles mate in the sea, they have to come ashore on the beach to lay their eggs. A female sea turtle lays around 100 eggs at a time.

They dig a hole of about 15-18 inches in the sand and camouflage it after laying eggs so that predators wouldn’t notice them. However, predators like raccoons and foxes often dig them up before hatching.

Some do make it to the sea but are instantly preyed upon by sea birds and other species of sea turtles. This is why the mortality rate of a baby sea turtle is very high. So only 1 out of these 100 survive before reaching adulthood.

What Is The Difference Between A Sea Turtle And Other Turtles?

There are several differences between a sea turtle and other freshwater turtles depending upon their feet, habitat, body size, shells. Naturally, sea turtles live most of their lives in blue waters, while other aquatic and semi-aquatic species wouldn’t stand a chance in deep, salinated waters.

Unlike freshwater turtles and tortoises, a sea turtle cannot retract its body inside the shell for protection. This is due to the evolutionary patterns. Their bodies simply don’t have enough space to retract and house their large, flat shells. However, these same shells streamline their bodies with water, thus helping them swim faster than freshwater turtles.

As the name denotes, a sea turtle’s habitat is in the sea. They need brackish water to thrive, whereas freshwater turtles cannot thrive in salty water. Freshwater turtles live in streams, ponds, lakes, rivers, and creeks. And they often spend equal time on land to bask and forage.

Sea turtles are significantly bigger than freshwater turtles. The largest freshwater turtle breed, Yangtze Giant Softshell turtles, can grow up to 3.25 feet and weigh around 220 pounds. On the other hand, the leatherback sea turtle grows more than 7ft and weighs 1500 pounds.

Migration is a peculiar characteristic of sea turtles that differentiates them from other freshwater turtles. They can travel thousands of miles for foraging and nesting.

Here are some of the interesting migration facts of a sea turtle.

Can Sea Turtles Breathe On Land?

A sea turtle’s breathing anatomy is similar to other land and aquatic turtles. Thus, they, too, come to the surface to inhale air through nares, which then goes into their lungs. Even though they spend most of their time in the ocean, they need to come to the surface for breathing.

How Long Can Sea Turtles Hold Their Breath Underwater?

A sea turtle, when foraging, can hold their breath for 10 to 40 minutes before coming to the surface to breathe. But, a sea turtle can sleep for 6- 8 hours underwater before needing air to breathe.

If you’re interested to know more, here’s our in-depth article on their underwater breathing techniques.

How Big Can A Sea Turtle Get?

Here’s a video of a magnificent leatherback swimming in blue water.

How Long Do Sea Turtles Live?

Though sea turtles are bigger than their semi-aquatic and aquatic cousins, they have a similar lifespan, which is 50 and over. A sea turtle’s lifespan is also quite similar to humans’. They mature between the age of 20 to 30 years. They will then remain reproductive for another 10 years.

What Do Sea Turtles Eat?

The green sea turtle will feed on zooplankton and other algae in the sea and are herbivores. But other sea turtles like loggerhead and leatherback are carnivores who feed on jellyfish, squids, barnacles, sponges, anemones, and other meat-based diets.

Final Words On Can You Keep A Pet Sea Turtle

Keeping sea turtles as pets is illegal in every country unless you are an activist or a scientist helping these turtles from being extinct. So, you need to know that all 7 species of sea turtles are highly endangered. You should, in fact, help create a better world for these marine animals to thrive.