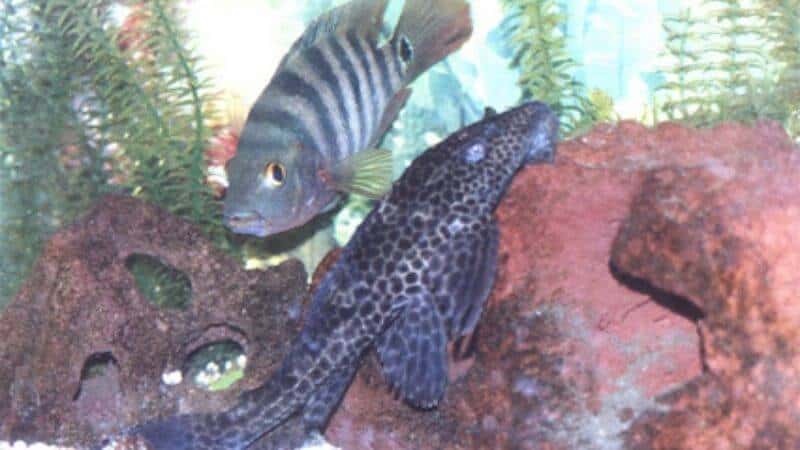 I remember this one time my friend temporarily housed a small, juvenile channel catfish with her African cichlids. She believed that the catfish wasn’t yet equipped and capable enough to harm the fish. But boy, was she wrong! She woke up to numerous cichlids gone or injured and the tank in ruins – it legit looked like a crime scene. So, that awful incident inspired me to write this article. Catfish with cichlids? Is it possible?

Can You Keep Catfish With Cichlids?

The answer is both yes and no. If you’re talking about smaller catfish species like pleco, pictus, synodontis, cory, and raphael catfish, the answer is yes. But if it’s bigger species like channel, flathead, and redtail catfish, no, you cannot and absolutely shouldn’t pair them with cichlids.

That being said, there’s always room for errors when coupling catfish with cichlids. That’s because catfish have a predatory disposition towards smaller fish, especially juveniles.

On the other hand, a cichlid’s highly territorial and aggressive nature is amplified by many folds within the confines of the tank.

Also, some catfish species like cuckoo catfish deceive the cichlids into raising the former’s young ones as their own. This sometimes can create animosity and feud in the tank.

Catfish are also notorious for secretly snacking on cichlid eggs.

Thus, if you plan on breeding cichlids, we recommend placing the mating pair in a separate tank.

One main advantage of adding catfish to a cichlid tank is that they will feed on algae and organic waste. Cichlids are messy eaters and produce a considerable amount of bioload. So, having cleaners like raphael catfish and upside-down catfish will definitely help to keep the water clean.

But keep in mind that you should not just rely on algae and supplement their diet with other food choices as well. While feeding catfish, you should not drop the sinking algae wafers into the cichlid’s territory or nesting spots. This will trigger unnecessary and entirely preventable feuds in the tank.

When getting a catfish, inspect the tanks at the local fish store. Ask them what species they keep with cichlids. And see, are the cichlids healthy and thriving, or look a bit beat up and stressed?

Now that you know the main gist and the general overview of the answer, let’s have an in-depth look into the matter, shall we?

Can Pictus Catfish Live With Cichlids?

Yes, bottom-feeder pictus catfish can definitely live together with cichlids. Pictus catfish are peaceful and social – they get along quite well with most tankmates as long as their requirements are met.

And since pictus live mainly in the bottom region, they don’t really interfere with cichlids. However, given their innate shy nature, you should make sure the tank has enough hiding spots. You will often see them retreat in these covers.

Add rocks, plants, small caves, and driftwood to create pathways and hideouts for pictus. They’re pretty active swimmers but take a backseat in the company of other fish.

Like most catfish species, pictus are known to steal and snack on a cichlid’s eggs and young babies. Thus, if you’re serious about breeding cichlids, you might want to do that in a different tank.

Can Synodontis Catfish Live With Cichlids?

Synodontis catfish are natives of Lake Tanganyika, which is home to several cichlid species. Also, it’s very close to Lake Malawi and Lake Victoria. So, water parameter-wise, putting synodontis catfish in an African cichlid tank is a safe bet.

There are several synodontis catfish species. They’re all compatible with cichlids except one – synodontis nigriventris, which swims upside down.

What I like about these catfish is that they don’t invade a cichlid’s territory. They usually keep to themselves and don’t disturb their neighbors.

Note that synodontis catfish should be kept in at least a school of 3 or more fish. They’re happy in a tank that has plenty of algae to feed on.

All in all, synodontis catfish are compatible with cichlids, both in terms of water chemistry and behavior.

Can Raphael Catfish Live With Cichlids?

Yes, it’s possible to house raphael catfish together with cichlids. These catfish are equipped with spikes on the dorsal fin, making them capable enough to hold their own even against the most aggressive cichlid species.

Raphael catfish have unique, arrow-shaped, cylindrical bodies. They have three delicate barbels in the mouth with thick, tough scales ranging from brown to blue.

Interestingly, these fish produce a distinct sound, like clicks and croaks, that you can even hear outside the aquarium. Hence, they’ve earned the nickname Talking Catfish.

Like most catfish, raphaels lurk around at the bottom where they hang around and eat – making them ideal candidates for a cichlid tank.

They’re pretty peaceful and shy. So, don’t forget to include plenty of hiding spots in the tank.

When Do Cichlids Get Their Color? 4 Reasons Your Cichlid Isn’t Showing Colors

Can Pleco Catfish Live With Cichlids?

Pleco, or plecostomus, species contains several types of catfish ranging from small bristlenoses to big sailfin plecos. You can easily house smaller types in a cichlid aquarium. They are primarily herbivores and snack on algae or plant-based diets.

It’s important to note that their ideal water pH level is a bit lower than what cichlids need. Therefore, they should be slowly acclimated to a cichlid’s tank.

Like most catfish, plecos are bottom feeders and spend most of their time at the base feeding on algae. This will give your cichlids plenty of space to swim around and minimize the chances of territorial battles.

You should also carefully design the bottom region of the tank so that your catfish has a good time down there.

Tank size is an essential consideration if you are going to raise bigger species. But we recommend getting plecos that will roughly get to around the same size as your cichlids. This will help to curb possible attacks and untimely deaths in the tank.

Can Cory Catfish Live With Cichlids?

Yes, cory catfish can live with non-aggressive, similarly-sized cichlids. They are calm, curious, and non-aggressive, which makes them ideal neighbors for your cichlids. However, they can also be a bit timid in front of other fish. So, they’ll appreciate it if you add a lot of covers and hiding spots in the tank.

If you have decided to get corys, you should get around 6 of them as they love to live in a social group. It will be pretty interesting to watch them interact with each other.

Since cory catfish don’t grow too big, we recommend housing them with similarly-sized dwarf cichlids.

As long as the cichlids in question aren’t hostile and aggressive, your corys will be on their own and leave the cichlids alone.

Yes, catfish can live with cichlids. But this is a very vague answer. There are so many species of catfish and cichlids – so, it’s all subjective.

Just remember that cichlids are notorious for their aggression. On the other hand, catfish have this innate predatory instinct. So, there’s very little room for mistakes.

However, most common catfish species like pictus, plecos, and raphaels can be quite easily kept with most cichlids.