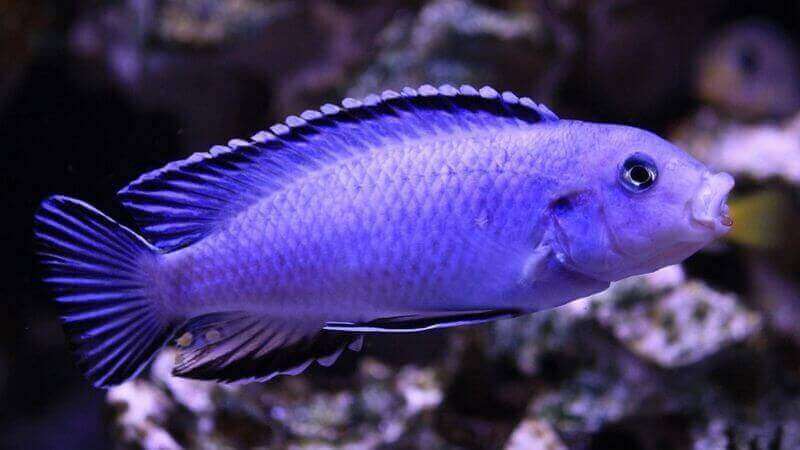 Cichlids are highly intelligent creatures. For instance, the stereotype that fish have a 3-second long memory doesn’t apply to cichlids. Research has shown that they can remember stuff for over 12 days! So, it’s naturally a matter of concern when these smarty-pants act out of their element, isn’t it? One such behavior is a cichlid swimming up and down – what could it mean?

Why Is My Cichlid Swimming Up And Down?

The term for swimming up and down the tank is ‘glass surfing.’ The most likely cause behind this eccentric behavior is an unsuitable environment. It could be a cramped tank, toxic water parameters, or an entirely new environment. However, other times, the reason could be something as simple as boredom and chasing own reflection!

Let’s have a look at the possible causes in detail!

The Water Is Toxic

No matter what corner of the world they come from, cichlids are accustomed to stable and pristine water parameters. Therefore, as hardy as they are, they don’t react too well to incorrect water parameters.

If you find your cichlid swimming up and down more than once, you should immediately check the water parameters. Like all fish, cichlids will suffocate in the wrong environment – forcing them to act frantically and display antics like glass surfing.

And glass surfing isn’t the only outcome of incorrect parameters. It can very well cut your fish’s life short.

Cichlids are messy creatures that produce a plentiful bioload every day. Thus, their tanks are always susceptible to a toxic build-up of harmful compounds like ammonia and nitrite.

Here are a few signs of ammonia poisoning in cichlids:

Next, here are a few signs of nitrite poisoning in cichlids:

If not intervened in time, ammonia and nitrite poisoning will prove fatal 9 out of 10 times. Hence, you should always strive to stay on top of the water parameters.

For instance, acidic water can downright burn your fish’s skin.

Before we conclude this point, here’s a quick look at optimum water parameters for cichlids.

The Tank Is Small

I’m sure you’re familiar with a cichlid’s notorious temperament and territorial behavior. If they had it their way, they’d be the only surviving fish in the tank.

Thus, these fish need a ton of space. The bigger the tank, the better it will be. They’ll all get enough space to claim their little territories and swim freely sans the awkward encounters.

If your tank is smaller than it should ideally be, don’t be surprised if you find your cichlid swimming up and down. The fish simply doesn’t have enough space to swim around horizontally.

So, a small tank directly translates to stress in fish due to lack of enough space and quick toxic build-up. And no wonder stressed fish would display erratic antics like glass surfing or swimming in circles.

The rule of thumb in the hobby is to provide two gallons for every 1 inch of fish. However, this doesn’t apply to all fish.

For instance, you can’t add two 12-inch oscars in a 48-gallon tank. A single oscar at least needs a 55-gallon tank.

If you’re wondering how many fish can be added in different sized tanks, check out the following articles:

How Many Cichlids In A 40-Gallon Tank?

How Many Cichlids in a 55-Gallon Tank?

How Many Cichlids In A 75-Gallon Tank?

These pieces include all the information on how many fish of different species can be added to a 40, 55, and 75-gallon tank.

While researching for this blog, I came across at least a dozen hobbyists who shared that their cichlids swam up and down when introduced to a new environment.

Cichlids, like most fish, aren’t fond of changes in their environment – let alone moving to an entirely new tank. It quite profusely stresses them out.

So, apparently, it’s pretty normal for cichlids to swim up and down when they’re introduced to a new tank. And it goes away after a week or so.

There are a couple of things you can do to ensure your cichlid has a smooth transition to its new home. First, acclimatize the fish slowly using the floating method or drip acclimatization method. Add plenty of hideouts made out of caves, rocks, and plants.

Cycle the tank properly and check whether the water parameters are to the T or not before adding your fish. And lastly, see if anybody’s being mean to your fish in its new home.

Glass surfing in a new tank reportedly stops after a couple of days or a week. So, if your cichlid shows this peculiar behavior for longer than that, there’s probably something wrong with its environment.

I know it contradicts what I said about a cichlid’s intelligence above, but sometimes, they can be surprised and amused by something as obvious as their own reflection! Yes, you read that right.

Once again, concluding from what hobbyists shared on forums, this is expected behavior when the fish is introduced to a new environment. It eventually stops after they get acquainted with their reflection!

This behavior is also quite common in young fry and juveniles who are naturally more inquisitive and trying to find feet in the tank. If you have young fish, you will often find them playing around with their own reflection!

This behavior subsides once they grow some brains.

If you find your fish, young and old, chasing their reflection, you should provide them with something that will keep them entertained and occupied. Give them something to swim in and around, like plants, rocks, and caves.

You can also add a few tank-safe toys like ping pong balls!

Although there is ‘disease’ in the name, swim bladder disease is a symptom caused by several different reasons. This condition will negatively impact your fish’s buoyancy, forcing it to swim in erratic ways.

A fish suffering from swim bladder disease cannot regulate the air coming in and out of its swim bladder. Thus, it resorts to swimming upside down or on the side. To restore balance, the fish can also swim up and down.

If the swim bladder is impacted due to bloating, it can be alleviated by fasting the fish for a couple of days and breaking the fast with cooked peas. Since peas are high in fiber, they can help regulate the fish’s digestive functions.

However, if you suspect an internal injury or an abnormality impacted the fish’s swim bladder, you should discuss the possible treatment options with a professional. Generally, they will either suggest removing a part of the bladder or adding a small stone to restore buoyancy.

The Fish Is Lonely

A lonely fish is stressed and bored. So it will look for ways to kill boredom. And sometimes, it will turn to seemingly unnatural antics like pacing up and down the tank.

Most cichlids, when young, like to live in a group and school together. So, if you have housed them alone, the chances are that they’re utterly bored.

This one is the most unlikely reason behind glass surfing, but you might still want to give it a thought.

Whether fish get along with other fish or brew animosity, they help each other keep occupied and amused – bringing out their natural instincts.

The Fish Is Stressed

A stressed fish can resort to unusual behaviors to manage the tension and stress. And one may wonder what does a fish have to stress about.

But all of the reasons that I stated above can fervently stress a fish. It could be a wrong environment, mean tankmates, boredom, disease, or all of them.

And a stressed fish won’t just swim up and down – it can swim in circles, swim upside down, dart across the tank, or not swim at all.

As fish parents, we try our best to emulate their natural environment in our tanks as much as possible and give them the best life possible. However, things can often go haywire, and we may not even notice it.

Therefore, if you find your cichlid swimming up and down and it doesn’t seem to stop, first and foremost, check the water parameters. You can then gradually continue experimenting until you can pinpoint the right reason and make the necessary changes.

How To Stop A Cichlid Swimming Up And Down?

If you find your cichlid swimming up and down only occasionally, it’s not much to be concerned about. In some instances, it’s completely normal and even expected. For example, when the fish is introduced to an entirely new environment or when it’s young and a tad bit stupid.

Some hobbyists also mentioned that their cichlids swamp up and down when they’re standing near the tank or when the fish is expecting a meal.

However, if you find your fish pacing up and down more often than not, this is a red flag!

As I stated above, the first thing you should do is check the water parameters right away! We use and highly recommend using the API Freshwater Master Kit for that. As it turns out, liquid-based test kits are far more accurate than strips.

Next, slowly continue to experiment until you get to the bottom of it. Remember, don’t make any abrupt changes. Your cichlids will not like it.

But most importantly, don’t panic! Cichlids can act in all kinds of unprecedented ways!

Final Words: Cichlid Swimming Up And Down?

Cichlid swimming up and down the tank is expected behavior in some instances. Several users across different fish forums reported that their fish did so when first introduced to the new tank.

Apparently, this quirk dies out once you give it some time.

Other times, the reasons can be pretty amusing. For example, fry and juveniles are often known to chase and play with their own reflection! This behavior too fades away once they wrap their head around it.

However, not all reasons are as lighthearted as this one. A bad tank environment, owing to factors like toxicity, unfavorable temperatures, lack of space, and utter boredom, is a matter of concern that should be addressed immediately!