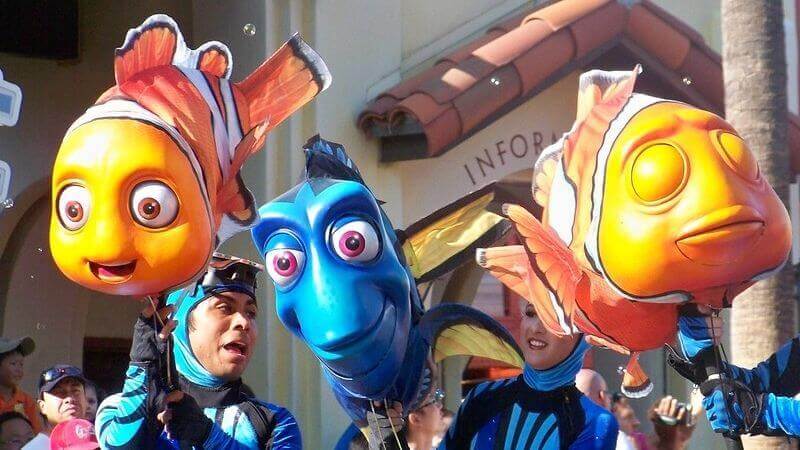 In the perfect world, you could add a clownfish and blue tang in a pretty little 30-gallon tank decked in your study table. You’d watch their antics and adventure for hours and hours as the clock ticks away…

Sounds dreamy, doesn’t it? Is it possible? Or are there more wishes than stars?

Can You Keep Clownfish And Blue Tang Together?

Yes, technically speaking, you can keep clownfish and blue tang together because their geographical distribution in the wild overlaps. They pretty much enjoy the same water parameters. However, it’s not practical to emulate Pixar’s iconic Nemo and Dory world in your home aquarium for several reasons.

Before I disappoint you any further, let’s first see to what extent their needs match.

So, as you can see, their water requirements are identical. That’s because both fish are native to the warm waters of the Indo-Pacific region.

Look at this video. Doesn’t it look like a scene straight out of the film? Of course, but note that this clip is from a public aquarium. And you know how big those things are.

Now, let’s get back to why clownfish and blue tang in the same tank isn’t a good idea.

1996 was the year I was born. It was also the year the film 101 Dalmatians came out. From what I’ve heard, people quite literally raced to their local pet store in a frenzy to buy their own Lucky, Rolly, and Patch.

But there was one small hiccup. People forgot to pay attention to the breed’s unique needs and temperament before purchasing the dog.

And you know what happened next? Thousands of dalmatians were rehabilitated in shelters and foster homes across the state in the following years. It was a sad affair.

But nope, we didn’t learn our lessons.

The same thing happened to turtles when Teenage Mutant Ninja Turtles aired and to owls when Harry Potter was released.

And as I’m sure you’re already aware, clownfish became the poster child of marine fishkeeping hobby when the film Finding Nemo was first released in 2003.

The demand for orange and white striped Nemos rose by over 40%, dwindling their population to grim numbers in the Philippines and Indonesia.

But please don’t. All parties will suffer – the fish, you, the ecosystem.

Okay, no more beating around the bush. Let’s get to the reasons straight.

When Finding Nemo first came out, scientists quickly found the secret to breeding them in captivity. Therefore, a good percentage of clownfish available in the trade today were born and bred in captivity.

However, to this day, people haven’t had any success trying to breed blue tangs in captivity. Therefore, all the Dorys available in the trade today were caught in the wild.

When Finding Dory first came out, experts warned that as many as a quarter-million blue tangs have been caught from their homes on reefs every year.

And do you know how they’re caught? Fishermen squirt cyanide at the fish or pump it into the water, so the fish gets stunned and surfaces in the water.

Reportedly, juveniles are targeted the most because they tend to flock to stony corals where they can be caught in big groups.

And it’s not only blue tangs that suffer. Any other creature that comes in contact with this chemical is exposed to risks of organ failure and consequent death.

The coral reefs are also suffering due to ocean acidification. So you see, nobody wins here.

A bulk of blue tang’s diet comes from algae. It constantly grazes on algae that grow on the coral reefs in the wild. Their small but sharp teeth help them nip and scrape algae off effectively.

If it weren’t for fish like blue tangs, algae would overgrow on corals, suffocate them, and cause their destruction. Therefore we can conclude that blue tangs are vital cogs within the larger ecosystem.

If the coral reefs get destroyed, it won’t just topple the marine food chain but also have an ever-lasting effect on our livelihood and civilization.

You Will Need A Very Big Tank

30 gallons is the recommended tank size for clownfish. They’re tiny fish. But for blue tangs, the number increases by many folds. The bare minimum requirement is 180 gallons.

That’s because these fish grow big and fast. They can reach almost a foot in length in under 2 years. On top of that, they’re active swimmers. So they need to be on the move all the time.

Now imagine tending an almost 200-gallon saltwater tank daily. This task is not for the faint-hearted.

And if you’re still on the fence, let me scare you once more. Blue tangs prefer living in groups or at least pairs. You’ll need an enormous tank to keep them happy.

Related Article: What Kind Of Fish Is Dory? Why They’d Make Terrible Pets?

Maintenance Will Be Difficult And Expensive

Mimicking the perfect parameters for clownfish may not be that difficult, but maintaining a coral reef tank for blue tang fish is like getting blood out of a stone – especially if you’re testing the waters for the first time.

Like all fish, blue tangs should be kept in surroundings that closely imitate their natural habitat. And for them, it means you should set up a 180-gallon coral reef tank.

I don’t think I need to get started on how complicated it is to maintain a coral reef tank. For instance, it will take at least 6 months to cycle the tank alone before you can add your Dory to it.

Rubbing salt on the wound, raising blue tangs is a costly hobby. The fish retail for anywhere between $60 to $250. And this may not sound like much, but let me get to the part where you need to break the bank.

According to John Nixon from Captain Nemo’s Aquarium Superstore in Pennsylvania, setting up a blue tang tank can take anywhere between $3000 to $10,000.

Big tanks need high-capacity equipment. You’ll naturally have to invest more time, effort, and money in upkeep too. And these fish need to be fed thrice a day. A few sprinkles of flake food won’t do. They demand a meaty diet.

All in all, it’s really going to be challenging to raise tangs both money-wise and maintenance-wise.

If you’re a beginner, I’d once again strongly request you to drop the idea. Instead, you can dabble with a freshwater lookalike before raising saltwater fish like blue tangs.

For all the money you will be splurging on your blue tang, you’d expect the fish would at least be healthy as a horse – a beautiful, hardy fish.

But do you know blue tangs are incredibly vulnerable to contracting marine ich, cryptocaryon irritans? Marine ich is a deadly parasite with a complex life cycle that makes it challenging to eradicate it.

In the store, the retailers can postpone the doomsday by using all sorts of tricks – copper and UV-based treatment and so on. But when the fish is introduced to a new environment, aka your tank, it will contract ich 9 out of 10 times due to the stress of moving.

After shelling thousands of dollars on a fish, the last thing you’d want is for it to transmit deadly parasites to your other fish.

And since you’ll be using a copper-based treatment once the parasite burrows inside your fish’s skin, you can bid adieu to the tank’s beautiful corals.

Blue Tang May Sting Your Clownfish

At best, clownfish are semi-aggressive fish. But blue tangs have an anger problem. Even worse, they have a weapon to use at their disposal.

A wild-caught blue tang will have a hard time adapting to the confinement of an aquarium. It will naturally be frustrated, agitated, and stressed owing to its territorial and aggressive nature.

And there’s a good chance that it will stab your clownfish with its poisonous, razor-sharp spines and cause an injury or two.

Bottom line: In a closed system like a small aquarium, the blue tang will scare clownfish stiff, and the latter will lead an impoverished and undignified life.

When Dory graduated from a sidekick to protagonist in 2016, the absence of captive-bred options drove collectors to source scores of blue tangs from the wild – in a harvest that’s destructive and unregulated.

It’d be really awesome to house clownfish and blue tang in the same tank to emulate the iconic duo in our homes. But while clownfish make good pet fish, blue tangs don’t.

Blue tangs are only recommended for seasoned saltwater tank hobbyists willing to put a considerable amount of time, effort, and money into raising these fish.

For a beginner, facts like the fish’s need for ample space, voracious appetite, and poisonous stings are more than enough to make a U-turn.