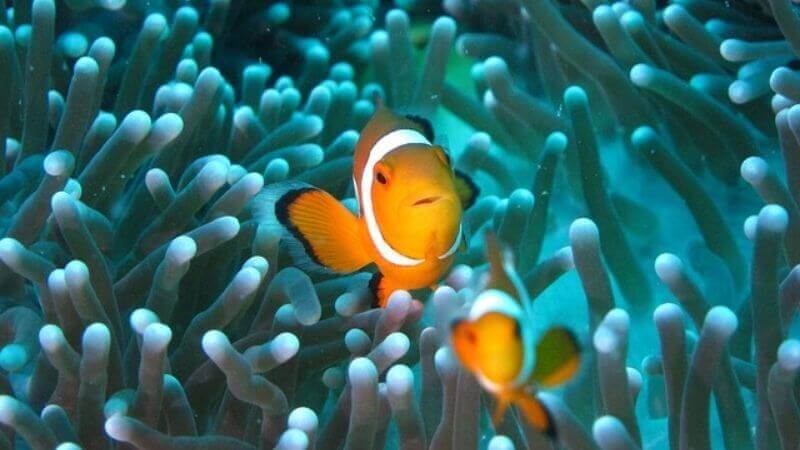 I was back in my hometown for the holidays last year. Strolling leisurely with my brother, I came across a ghastly, gruesome sight. No, there was no accident. It was the local fish store.

There is a huge signboard on the front with a photo of a clownfish in a 1-gallon deco kit and “Take Nemo home for only $80” written in big letters.

The Nemos we all know and love were supposed to dwell in magnificent seas and forage among brightly colored coral reefs. If we were to keep them confined in glass tanks for the rest of their lives, the least we can do is provide a big tank.

Marketing gimmicks like the one my LFS pulled may help make some quick buck or provide instant gratification to your impulsion, but the poor fish will suffer miserably.

So, cutting to the chase now, what’s the ideal clownfish tank size?

Are they not supposed to live in pretty little bowls decked in a corner in the study? Definitely not!

Keep reading to find out why.

What Is The Minimum Recommended Clownfish Tank Size?

As per recommendations from experienced fishkeepers, the minimum recommended clownfish tank size is 20 gallons for a single fish. For each additional clownfish, you should allocate additional 10-15 gallons.

The answer above is based on the assumption that you’re keeping only clownfish and no other creature or item in the tank.

However, in practical life, the answer is subjected to various factors like the number of other fish (their temperament, too), invertebrates, and corals present in the tank.

In all of my blogs concerning fish and the tank size, I include a segment where I pool in real answers left by hobbyists on different forums and threads.

My intention is to help you find out what fellow fishkeepers think on the particular subject in a single platform – eventually helping you make an informed decision.

Interestingly, this time, as I scoured from one forum to another looking for what people have to say about keeping clownfish in tanks smaller than 20 gallons, I was met with a mixed reception.

While some vehemently discouraged keeping them in anything smaller than 20 gallons, numerous hobbyists swore they’ve kept clownfish in tanks much smaller than that without any hiccup.

I personally still think the minimum recommended tank size for these tangerine fish is 20 gallons. And I assume that those who said they’ve kept clownfish in 5 or 10-gallon tanks were talking about smaller species like ocellaris and percula.

But it’s only fair that I include answers from both parties. The rest is up to you.

Related Article: 5-Gallon Clownfish Tank? Is It Even Possible?

Disclaimer: All the answers expressed below belong to the respective authors.

“10 gallons would be okay for a small pair. But that’s it. Fully grown ocellaris grow almost 3.5 inches long. So a 10-gallon tank would eventually be too small.”

“The minimum tank size for a clownfish is 20 gallons in the long term, in my opinion.”

“I’m going to say no, but it’s possible. Two baby clownfish and a tiny anemone can be kept in a 5-gallon tank for a short amount of time.”

“I feel that the smallest tank for a pair of smaller clown species like percula, ocellaris, and pink skunk with or without anemone is 20 gallons. For larger species like clarkii and maroon, you’d need a 40-gallon breeder as a minimum.”

“I’m no saltwater expert, but I would say 20 gallons would be the bare minimum requirement. Maybe the long type too.”

“If you’re putting a clown in a 5-gallon tank and have plans of upgrading in the future, I don’t see any harm in that.”

Disclaimer: All the answers expressed below belong to the respective authors.

“I have 2 adult clownfish in a 10-gallon tank. Perfectly healthy and happy. I do water changes every 2 weeks or so.”

“Any fish would be better off in a greatly maintained 10-gallon tank rather than a poorly kept 100-gallon tank.”

“My clown in my 5-gallon tank is pretty happy and healthy, from what I can tell. But then again, I keep the water in tiptop shape at all times.”

“I kept a pair of occy clowns in a ten-gallon tank. I feel that was pretty maxed out. And that’s the smallest the clowns are.”

“I have a full-grown pair of black and white ocellaris clownfish in my 12-gallon nanocube.”

So, there you go. That’s two schools of thought right there. And I think you know which side I’m on.

If not, the upcoming segment will give it away.

The Risks Of Putting Clownfish In A Small Tank

As I have said a zillion times before, the minimum recommended tank size for clownfish is 20 gallons. In tanks smaller than that, the fish will lead an impoverished life. It will be prone to stress, disease, stunted growth, and ultimately shortened lifespan.

Clownfish can very easily live for over a decade if kept in the right conditions. They’re a long-term commitment. You’re better off buying a big tank in the first place instead of upgrading every year or so.

Below, I’ll lay down a few points highlighting the caveats of keeping clownfish in small tanks.

Small Tanks Are Prone To Pollution And Sudden Changes

There’s a common misconception that small tanks are easy to look after. But remember, looks can be deceiving. As a matter of fact, small tanks are handful by many folds compared to big tanks.

For example, a certain amount of uneaten food can swiftly increase a small tank’s ammonia level, whereas it can dilute without any consequences in a big tank.

Even worse, the biggest downside of small tanks is that problems arise swiftly, and they often prove fatal before you can correct them. Also, a slight change in one corner can be felt throughout the tank in a matter of a few minutes.

This is all due to the small volume of water.

Therefore, we can conclude that a small tank will constantly keep you on your toes. You will need to monitor the water parameters closely at all times.

Most fish release certain pheromones into the water to hinder the growth of other fish. This probably has something to do with the survival of the fittest.

Anyway, in nature, this isn’t that big of a problem. One big swoosh, and the pheromones are washed away.

However, it would be quite a concern in a closed system like a tank, don’t you think? This is because the pheromones have nowhere to go but be absorbed into the fish’s body. Hence, it can cause stunted growth.

And let’s not forget muscle atrophy. If any fish doesn’t get to swim and move its muscles as much as it wants, it becomes highly susceptible to muscle atrophy, which in turn can stunt your clownfish’s growth.

Small Tanks Give Rise To Stress And Disease

A small tank will stress your clownfish in one too many ways. For starters, these fish are incredibly territorial. A lack of enough space means heightened animosity over who gets which spot.

Second, the water parameters are volatile and highly prone to pollution. This will naturally stress out the fish.

And when stressed, your clownfish’s body will react by producing a stress hormone called cortisol in excess, linked with lack of appetite and increased lethargy.

On top of that, stress inhibits the production of white blood cells in fish – directly compromising its immune system and exposing it to many pathogens waiting for the golden moment to strike.

Anemones are a lot harder to raise than clownfish. Therefore, if you’re a beginner, I’d recommend against raising anemones in the first place. But if you intend to anyway, the tank must be designed with an anemone’s needs in mind.

Although clownfish are often kept in tanks sized 10 or 20 gallons, if you plan to raise anemone, you’d need to allocate at least 50 gallons of tank space for it alone.

And although clownfish thrive in normal lighting, anemones require high-output light such as metal halides.

Before we end this article, have a quick look at some of the most frequently asked questions on clownfish.

Can A Clownfish Live In A 2-Gallon Tank?

No, just because a clownfish fits inside a 2-gallon tank doesn’t mean it can live inside it. 2 gallons is too small for clowns. I’d recommend at least 20 gallons for a single clown. And 10 gallons extra for each addition.

Can I Keep A Clownfish In A 5-Gallon Tank?

How Many Clownfish In A 10-Gallon Tank?

Since I recommend 20 gallons as the bare minimum requirement for a single clownfish, my answer to this question is 0. However, as you can see from the comments above, people have successfully raised 1 or even a pair in a 10-gallon tank.

But I’d strongly suggest getting a bigger tank.

How Many Clownfish In A 20-Gallon Tank?

You can keep 1 clownfish in a 20-gallon tank. And if you’re really pushing it, you can add one more – but no more than that.

Clownfish Lifespan: How Long Do They Live?

In a captive setting, a clownfish enjoys a pretty decent lifespan. They can easily live for about 3 to 10 years. Moreover, many hobbyists have commented that their clownfish lived for over 2 decades.

In my opinion, the ideal tank size for a single clownfish is 20 gallons. Although these fish are small, they are pretty aggressive and territorial. Therefore, they’ll lead a poor life in a cramped tank.

Plus, small tanks are a lot harder to maintain than big ones. So you’re better off getting a big tank. It will make your life easy and your clowns super happy.