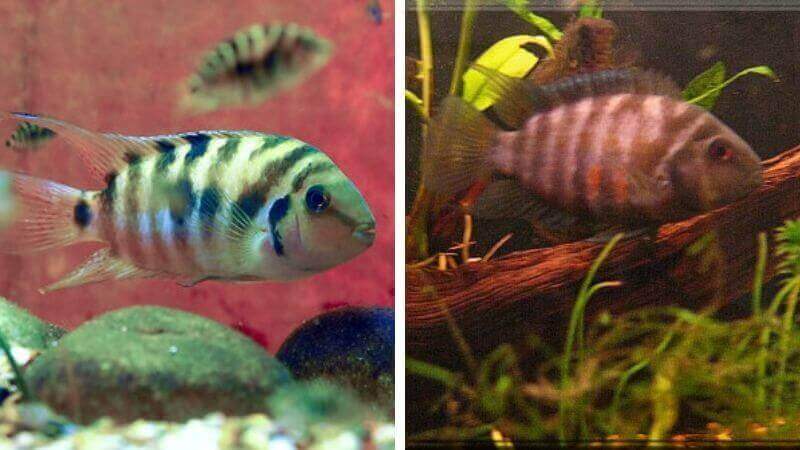 Breeding convict cichlids is easy. If the surrounding is conducive, you can end up with thousands of fry in a few months. But telling apart a male from a female convict cichlid can be difficult.

In some species, males and females can be separated at one glance. The color, size, and shape give it away. But sexual dimorphism is pretty subtle with convicts.

There’s plenty of room for mistakes.

In today’s piece, we will discuss how to differentiate male and female convict cichlids.

At first sight, male and female convicts look pretty identical. But there are slight differences. For example, males are normally a bit bigger than their female counterparts. They also have longer and pointier fins. However, the biggest giveaway is the orange tint in the female’s abdominal region.

Let’s have a detailed look:

Male cichlids are comparatively larger than females. A male’s average length is 6 inches in the aquarium, whereas a female clocks in at around 4.5 inches.

As juveniles, fish grow at different rates. You can have a prodigy female that achieves its maximum size by 6 months or a late bloomer male.

So, telling the difference with the help of size can only be helpful if your cichlids have fully matured.

Females Have An Orange Belly

Female bellies turn a beautiful shade of orange as they mature and their bodies prepare for breeding. Specks of orange can also be seen in the dorsal fins.

So, if you see your convict cichlid has an orange belly, it means tiny fry will soon be on their way.

Males Have Longer And Pointed Fins

But this parameter may not hold true for all fish. I have seen female convicts with fins that extend past their tail fin.

Also, several hobbyists on fish forums have reported that they have males with short and round fins and vice versa.

In most fish, males are more intensely colored than females. But that’s not true for convicts. Females often sport more vibrant colors than males. The black stripes are comparatively more pigmented.

However, males reportedly have more vertical stripes than females.

Male convict cichlids have a steeper forehead and a slight bump made of vestigial fatty lump. It’s in no way as prominent as a flowerhorn’s bump, but it’s still there.

Females, on the other hand, have smooth and inclined foreheads.

They Have Different Gender Papillae

Males and females have different gender papillae in convicts, as it is with most fish. The female’s papillae, also known as an ovipositor, is broad and flattened, which helps with laying eggs.

On the flip side, a male’s gender papillae slightly stick out – helping him release and deposit sperm onto the eggs.

Direction Of Egg Tube Is Different

Size Of The Vent Is Different

A female convict’s vent is slightly larger than the anus to facilitate egg-laying. However, a male’s vent is almost the same size as his anus.

It’s pretty easy to tell apart a white male convict from a female. The female’s orange belly is easily visible against the white body. Besides this, some other factors to differentiate are size, venting, and so on.

In pink convict cichlids, males are slightly bigger than females. Males also have longer, flowy fins comparatively. The orange belly in females can be hard to see against a pink backdrop, but if you do, it’s definitely a female.

Observe the belly. If it has hints of orange, it’s a female. Also, males are usually a couple of inches bigger than females. You can also examine the fins. A female’s fins are almost always shorter and rounder.

How To Vent Convict Cichlids Correctly?

Prepare 3 small buckets with some water from your main tank. You can use just 2 buckets, but I find it easier to use 3. I transfer all my fish to one bucket, and once I’ve examined them, I transfer males in 2nd and females in the 3rd bucket.

Gently net the fish and transfer them to the first bucket. Your fish will get startled and will definitely try to resist. Therefore, make sure to channel patience from your side.

If your fish is stressed, it becomes impossible to check the vents. So, go slow no matter how long it takes.

Hold a fish gently on its side using your thumb and index finger. Next, slowly dip the head region into the water and check the vents.

While examining, don’t keep the fish out of water for over 30 seconds. Also, you might want to use a magnifying glass to check the vents.

Once done, transfer the fish to their designated buckets.

At What Age Can Convict Cichlids Breed?

Convict cichlids grow at an impressive rate. So, they reach sexual maturity quite fast, too. They are ready to breed by the time they reach 16 weeks.

They will then form pairs, breed, and astoundingly care for their young ones.

How To Breed Convict Cichlids?

Convict cichlids are the rabbits of the aquarium trade. They breed readily and prolifically. Also, they’re cave spawners and make excellent parents.

If you want to breed convict cichlids, your best bet would be to purchase a group of juveniles and wait for them to form pairs. And once a breeding pair is formed, transfer them to the breeding tank because they get incredibly intolerant of other tankmates.

You can encourage them to breed in the breeding tank by performing a significant water change, slightly elevating the temperature, and offering a suitable cave to lay eggs on. For the cave, you can simply use an aquarium-safe pot turned on its side.

As part of the mating ritual, the pair will shake their heads at each other. They will also be involved in a fascinating pre-spawning dance. They will circle each other and flare their fins.

When ready, the male will position himself vertically and change to darker, more intense shades. The female will quickly follow suit.

Once the pre-spawning ritual is complete, they will clean the designated egg-laying spot and dig small pits around it.

The clutch size is quite large. The female can lay up to 300 eggs. But at a time, she will only lay 20-40 eggs. So every time she lays the egg, the male will diligently go ahead and fertilize them.

The process of laying all the eggs and fertilizing them can take a few good hours. The brood size is subjective to the female’s health and maturity.

Now, convict cichlid’s iconic parental care begins. The mother will continuously fan the eggs, so the fungus doesn’t develop. In contrast, the male will patrol the area to ward off potential predators. However, if they are in a breeding tank, there’ll be no predators.

The eggs hatch in the next 48-72 hours, depending on the pH range and temperature. At the wiggler stage, they rely on their nutritious yolk sac for much-needed nutrition.

And they become free-swimming fry after 5-6 days. At this point, you can give them baby brine shrimp, daphnia, and pulverized flake food.

As I said earlier, convict cichlids make exemplary parents. They will continue to care for their young ones for several weeks. For instance, they will stir the sand with their bellies to expose food that has settled to the base. They will also chew up food and spit them into the water for the young ones to eat.

If they feel danger, they’ll often bury the fry under the sand. And if any stray away from the nest, the male will viciously guard it and retrieve it.

However, the best part is that parents secrete a mucus-like substance from their bodies, which they use as a secondary food source for the fry! Amazing, right?

Sexual dimorphism in convict cichlids is neither too apparent nor too subtle. At first glance, it may be difficult to tell them apart, but one closer look is enough!

Male convict cichlids are slightly bigger than females. They also have longer and pointier fins (this may not hold true for all fish). However, the most revealing point is the beautiful orange tint only present in a female’s body.

Lastly, the color intensity, presence of nuchal hump, the difference in gender papillae, direction of the egg tube, and vent size can also help differentiate male and female convict cichlids.

How Big Do Jewel Cichlids Get? 4 Tips To Grow Them Fast!