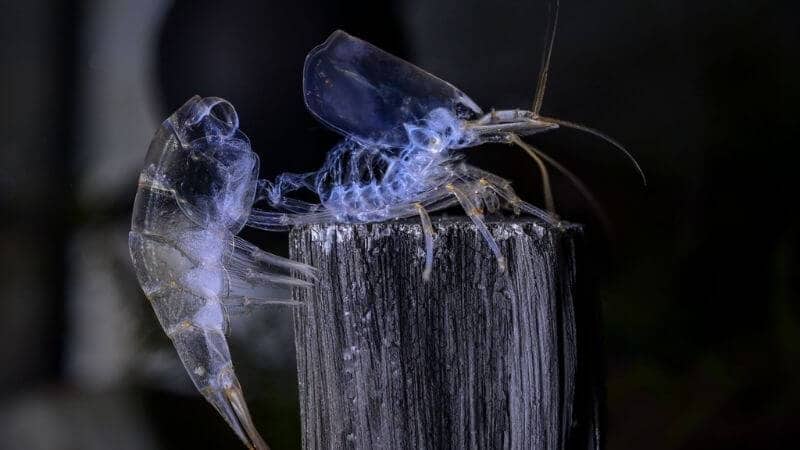 If you have noticed your Amano going AWOL, then it could be because of several reasons. The fact that they are mysterious can amaze you what they are doing when going rogue. It is known that most of their time; they are too busy feeding off the algae in your tank. This is a great sight to behold when your Amano shrimps are doing what you put them in for, but what to do when they go missing? Do Amano shrimp bury themselves?

So, let’s dwell on more of it in this article.

Do Amano Shrimp Bury Themselves?

Reasons Behind Amano Shrimps Burying Themselves.

Molting Can Be The Case

Molting is a critical phase for every shrimp. Amano shrimp often molt when they are young. Relentless consumption of algae and other leftovers in the tank helps them grow faster than other shrimps, which answers their frequent molting.

Whenever an Amano shrimp is about to molt, he may be anxious about other inhabitants of the tank, so it might dig and bury itself to hide. But digging and molting under the substrate isn’t a usual sight.

Intimidated By Other Fishes

Though Amano shrimps are more extensive than other shrimps like cherry and ghost shrimps, they too get scared from the bigger inhabitants in their tank. These bigger residents’ presence in the tank can also cause your Amano shrimps to fear its life and bury itself.

So you need to be careful when you are choosing mates for your Amano shrimps.

When it comes to feeding, Amano shrimps are extreme. They will devour almost every type of algae in your tank. However, to satiate their hunger, you need to feed them regularly and in full. If there’s a scarcity of food in their habitat, they will relentlessly look everywhere for food in the tank. So you will see your Amano shrimps trying to bury themselves in the substrates.

Loose substrates are known for growing algae. These substrates will provide suitable conditions for algae to grow and flourish in the tank. And your Amano shrimps are remarkable at smelling these algae. So, you will see your Amano shrimp diving into these nooks and corners to find their beloved dish.

No Plants In The Tank

The most common mistake newbie hobbyist make while keeping Amano is putting them in a tank with no plants. You shouldn’t do it, be it Amano shrimp or any other aquatic pets you have in your tank. You should try to mimic their original habitat in the wild.

In the wild, too, Amano shrimps hide below the pebbles and rocks when fewer plants are in their vicinity. So, if you see your Amano shrimps burying themselves, then you need to know that you need to include plants in your tank. It will be wise to learn the basic aquascaping and put live plants rather than getting fake plants for your Amano shrimp tank.

The Lights Are Too Bright

Yes, we like to make things bright in our aquarium. But do you want your aquatics to live 24/7 in bright lights inside their tank? As I mentioned earlier, it is necessary to mimic their habitat to calm and let them thrive.

Amano shrimps are diurnal, so they will sleep at night and feed during the day. Despite their relentless enthusiasm for feeding, they too need rest, and often the bright lights in the tank hamper their resting schedule. Therefore, your Amano shrimp bury themselves in the substrates.

It Could Be For Fun

Do Shrimps Bury Themselves?

Yes, shrimps bury themselves when there’s danger from predators, or if the lights are too bright, to maintain body temperature and while searching for food. These are a few reasons, but it is quite common for shrimps to bury themselves.

Last Words On Do Amano Shrimp Bury Themselves

Usually, Amano shrimps are busy with feeding algae, but if you see them digging and burying themselves, something is off with their habitat. It could be because of less feeding, and they are searching for food, or it could be them hiding from the big inhabitants in the tank. However, suppose water parameters are out of suspicion. In that case, you need not worry because maybe your Amano shrimps are just playing and venturing unchartered territory in their tank. These could also be the underground sites in your tank.

Will Ghost Shrimp Eat Fish? Are They Scavengers of Predators?