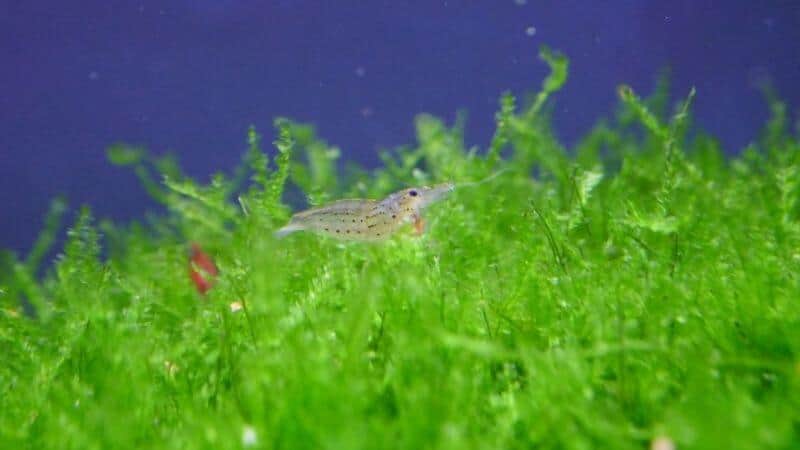 Amano shrimps are the best solution to the algae problem in an aquarium. Be it hair algae or the black beard algae; they can gobble up most algae in a tank. So do this feeding frenzy of theirs limit to only algae, or do they consume baby shrimps too? Amano shrimps are omnivorous, so the question is not a surprise whether they eat baby shrimps.

Although Amano shrimps mostly feed on algae, they like a balanced diet that comprises meaty products that are rich in protein. There have been many reports among aquarists that their Amano shrimp are feeding on baby shrimp. So it is true that Amano shrimp eat baby shrimp when there’s a lack of food in the tank.

You might not expect how weird and unusual your Amano can be when it comes to feeding.

They are also known for some weird feeding habits. Even though you might have heard great things about them, sometimes they can get greedy and feed on what you least expect.

In most cases, Amano shrimp will only feed on a baby fry if he is already dead. They do the same for shrimps too. They will also consume the baby fry’s shed after the molting. Other times, they will be busy having a duel over the food that you feed them.

Breeding Amano shrimps in captivity is a challenging and meticulous job, as they do it only in brackish waters. So, they might not distinguish a baby shrimp even though it’s a pre-form of their own. And when they see these baby shrimps, then they might go for it, thinking of them as the only snack.

How To Stop Amano From Eating Baby Shrimp?

If you notice that your baby shrimps are decreasing in number, then possibly the prime culprit could be the Amano that you see getting fatter every day. So here are a few things that you can do to stop your Amano from eating baby shrimp.

Get a Bigger Tank

Amano shrimps can be a little aggressive when the tank they are housed in is small and compact. This often leads to a struggle for food and areas to graze on. So you need to maintain the ratio of Amano and the gallon of water it requires. The best ratio for keeping Amano is 1:3, meaning 1 Amano will need at least 3 gallons of water to thrive. So, get a bigger tank so your bigger shrimps won’t be bouncing upon baby shrimp often. A bigger tank will give your energetic baby shrimps enough space to run when in danger from the adult ones.

The reason that your Amano is going after baby shrimps could be that you are underfeeding them. It causes a scarcity of food for them. They will get voracious and will devour everything that is in the tank. Feed your shrimps enough so they won’t have to go for every other smaller being in the habitat.

Every aquarist should include live plants in their aquarium. These live plants help in growing more algae and will become a food resource to your Amano. After finishing algae, your Amano will go for eating the about-to-die leaves and parts of the plants. This will divert your Amano’s attention from the fragile baby shrimps. Plants also give enough hiding space for your baby shrimps to hide and escape during danger.

Get A Separate Tank

Sometimes, even though we give our best, we get the unexpected. This can happen in Amano shrimps too. You follow all the procedures you are suggested in the fish forums, but your Amano is not ceasing to attack the young ones. If that is the case, then you need to separate your young shrimps from the big ones by putting them in a separate tank. Or use a tank divider. Separate tanks will give your baby shrimps the freedom to roam anywhere they like in their habitat. Feed both groups with enough food and let your baby shrimps mature fully.

Once grown into an adult shrimp, you can put them back in the same habitat with the right population proportion.

Do Amano Shrimp Eat Other Shrimps?

When there’s a scarce food source, then Amano shrimps will feed on other shrimps. If the tank they are living in is small, they will bump into other smaller shrimps and show their dominance by consuming them. However, that is a rare sight to see, but documented sightings have told otherwise.

Algae might be the first food of choice, but they will hunt for meaty products to gain a balanced diet.

Do Amano Shrimp Eat Other Fishes?

Amano shrimps are known for their gentle characteristics; however, the lack of food and space dominion could lead them to hunt for other food resources. It is found that Amano shrimps search for food in groups and go for fishes their size when they get entangled in between plants. Otherwise, they only eat dead fishes or decayed fishes in the tank.

Amano shrimp eat even the hardiest algae, but most beginner aquarists do not know their unusual eating behavior, and it might come as a surprise for anybody. Yes, they eat baby shrimps even though they are being fed properly. It’s just a harsh insight into how nature operates its food chain. The smaller ones are the ones who are preyed upon by the big. So what you can do is get a bigger tank where your baby shrimps can hide or get a separate tank if better. This way, you can prevent your baby shrimps from being eaten by Amano shrimps.