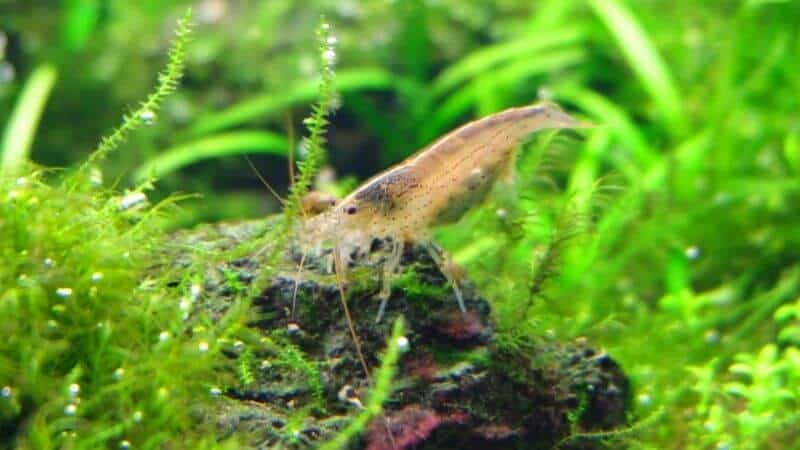 Keeping Amano shrimp is one of the best alternatives to using chemicals for stopping algae growth. In fact, they are more effective than commercial chemicals. Even though the manufacturer’s claim that these chemicals are water-friendly, but who knows? After all, they are not a nature-based solution to your algae problem in the tank. Thus, when it comes to controlling algae in your tank, nothing beats an Amano shrimp. So with the popularity of their algae-eating habit, but do Amano shrimp eat hair algae?

These hair algae are one of the most common algae that grow in a tank. They can grow profusely and will cover your tank if no measures are taken. These hair algae can be manually removed because their holdfast isn’t strong enough to resist. The cause behind hair algae growing in your tank could be too much light, not enough nutrients, low or fluctuating CO2, or a spike in ammonia.

What Types Of Algae Do Amano Shrimp Eat?

Green spot algae are the algae that you can see on glass, plants, driftwood, rocks, and substrates. They remain short and flourish rapidly, especially in hard water. Amano shrimp can eat green spot algae, but as these algae stick mostly on the glass, they will find it hard to keep it spot clean. Snails like Nerite snails can clean the ones that stick in the glass.

Green dust algae are soft and edible for Amano shrimp, but if any measures to remove them aren’t taken, these algae can cement. Once cemented, it will become tough enough for Amanos too.

Brown algae is not your usual kind of algae. They are made up of Diatoms, a very tiny animal, which you cannot see with naked eyes. Amano shrimp eat through them with their filter eating technique. However, these algae also grow in a glass tank where Amano will have a hard time to feed.

These Brown algae grow in tanks where there’s too much cycling of water. They are also common in a new setup where the ammonia content is high. They grow due to the poor water parameter in a tank.

Even though black beard algae are the notorious, tough, resilient algae in the algae category, an Amano can eat them with ease. No matter how resilient these algae are, an Amano will prowess it with their inhuman active mode.

These black beard algae result from too much light, inadequate filtration, and overfeeding in the tank. So if you want to rid your tank of it, you need to underfeed your Amano for a couple of hours so they will be hungry enough to dig on these algae.

Red algae aren’t plants, even though they have similar cell walls to plants. They can be red, purple, or reddish-purple. Amano shrimp will devour these microscopic algae with the filter-feeding method, like the bamboo shrimp.

This type of algae results from lousy water circulation and accumulation of nutrients in the tank. Few aquatics can only eat these kinds of algae, and Amano is the most favored when it comes to removing red algae from your tank.

Green water algae are the floating algae that won’t settle on an aquarium’s surface or glass. An Amano shrimp, just like the bamboo shrimp, will use its filter-feeding technique to consume this type of algae when hungry.

When there’s a high ammonia presence with low CO2 in an aquarium, these algae flourish quickly. Not all shrimps can eat this type of algae, so Amano shrimp and bamboo shrimp are the few shrimp breeds that can consume these algae.

Why Isn’t My Amano Not Eating Algae?

We will discuss this in more detail.

You need to know that no matter what you heard on how relentless Amano can be while grazing on algae, but they won’t eat algae if you are feeding them algae flakes yourself. They need to get hungry to feed on algae. So overfeeding could be the issue why your Amano shrimp are not feeding on algae.

No matter how good your Amano is at grazing algae, low water quality can make them ill and decrease their algae feeding activity. Take a testing kit and measure the composition of elements like nitrate, nitrite, and ammonia in your water. Lower these parameters, and you will see your Amano back on feeding again.

The wrong pairing of tank mates is also the reason your Amano shrimps aren’t feeding on algae. Amanos are gentle creatures and are easily frightened by bigger tank mates. When frightened, they will hide in the plants and corners and don’t come out for grazing. That is why you need to pair them with suitable tank inhabitants. Pair them with other shrimps, guppies, neon tetras, and snails, and you will see them back in business.

Amano shrimps are the best of the best algae eaters in all the shrimp family. The relentless active mode of theirs puts them in a league of their own. They will feed on almost all kinds of algae. However, you need to keep them hungry enough to graze on their own if there are enough algae in the tank. Overfeeding should be avoided if you want to keep your tank algae free with the help of these excellent algae feeders.