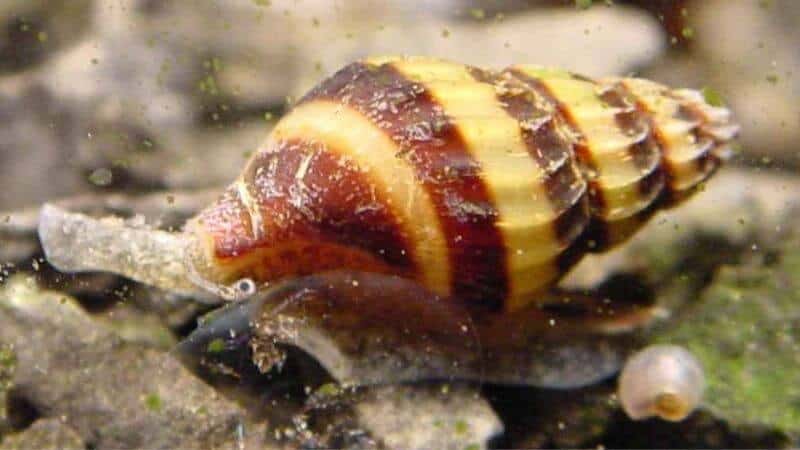 Snails are usually known for their resourcefulness. They are masters at gobbling up virtually everything from algae to leftovers to fish poop. But some snails’ competencies are not limited to eating algae only. One such species is the assassin snail. It is a ferocious carnivore that lives up to its name.

But can these killer snails possibly nibble on algae to satiate their appetite? Has anybody ever caught them in the act?

This is the topic we will bat around in this episode of snails.

Assassin snails are carnivores and need protein to thrive. But if their habitat has no protein sources to fulfill their nutritional demands, they will resort to consuming algae. Although rare, it is possible to find assassin snails feeding on algae.

There have been sightings of assassin snails nipping on algae. This indicates that they aren’t getting enough protein-rich food.

But you might wonder, of all things, why algae?

It might surprise you, but some algae, like the blue-green and green algae, are rich in protein – between 40 to 60 percent of dry matter.

So, during the famine, assassin snails eat algae as a last resort when there are no snails or dead matter to consume. Desperate time calls for desperate measures. And although eating algae will not fill their belly, it does the job.

How To Get Rid Of Assassin Snails? 7 Ways To Remove

There are over 40,000 snail species with all kinds of diet regimes. They can be herbivores, carnivores, omnivores, and detrivores.

Assassin snails feed on other snails, worms, fish, and invertebrates. And like I said earlier, not only do they eat live and dead prey but also algae to meet protein demands during dire times.

Assassin snails have a retractile proboscis, known as “siphon,” inside their mouth, which appears as if it is projecting from their head. This helps them suck in food and water.

Once the food gets sucked in, they taste it using osphradium, their sensory organ. The food is then crushed by radula, a tensile band of thousands of teeth, and passed to the alimentary canal.

After the nutrients, specifically, protein, are absorbed from the food, the undigested food passes through the digestive tract, where ciliated grooves reabsorb simple sugar molecules from it.

The remaining becomes feces and is then passed through the anus.

Assassin snails are carnivores and have a much higher protein demand. Therefore, the amount of protein they get from algae or other plants will not be enough. Also, they have a shorter digestive tract, a standard feature seen in all carnivore animals.

But What Happens If Assassin Snails Eat Algae?

Assassin snails do not have the appropriate digestive system to digest algae or other herbivore diets. Despite that, their system does a decent job of extracting protein from algae. However, they will soon have to find a reliable protein source.

Like most snails, assassins also go crazy for these wafers. In fact, eating wafers supplements them with vitamin A, D3, and E.

How To Know If Your Assassin Snails Are Hungry?

Assassin snails are predators and won’t hesitate to hunt for food, even in a tank. However, an assassin snail can only eat a certain amount at a time. So, if your assassin isn’t making its move on other pest snails, it isn’t hungry.

And if you’ve been feeding algae wafers and pellets to your assassin snail in an assassin snail-only tank, it can be hard to tell if they are hungry.

Assassin Snails And Plants: Do They Eat Plants?

So, does it mean that assassin snails promote algae growth in the tank?

It is hard to tell if promoting algae growth is in their best interest, but their predatory instinct does help encourage algae growth in the tank.

But if we look at the stats, it is clear that assassin snails won’t be able to finish off every snail in a tank. So the limitation on how much they can eat will always be a constant factor.

However, it is no doubt that these killer snails will help control the pest snail population in the tank.

What Do Assassin Snails Eat?

Assassin snails eat worms, small invertebrates, and snails of every species. Although their natural diet is yet to be investigated in detail, they have been found to favor planorbidae, physidae, and thiaridae snail species.

In captivity, they will also settle for algae wafers and commercial pellets. They scavenge molts, dead fish, and fish leftovers in the tank when hungry.

Only when there’s a food shortage for months or years will these snails turn cannibals. Until then, they will make do by scavenging on anything they find under the substrate.

So, if you have witnessed assassin snails attaching their body to one another, worry not because it is a sign of intimacy. Often the female assassin snail drags its mate for hours during intercourse.

Assassin snails are carnivores and do not generally eat algae or other plants. But when there’s a food shortage, they eat whatever they find in their habitat.

And yes, when tough times come, they will eat algae, too. But the good thing is that algae are rich in protein, which these killers desperately need to sustain.

So, what does it mean if your assassins are grazing on algae?

Of course, it means you have not been keeping them well fed. So, next time you see your killers grazing, introduce some pest snails or put some more of that algae wafers.