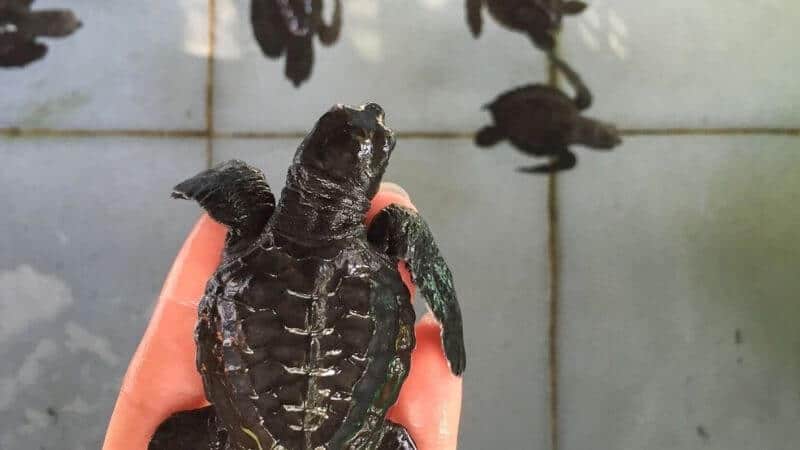 It’s expected that turtles like to sleep a lot, but not baby turtles. The infant stage of a turtle is the phase when turtles are most energetic and show little to no signs of lethargy. So if your baby turtle is sleeping a lot, there might be something wrong with him or his habitat.

Do baby turtles sleep a lot? No, Baby turtles aren’t much of a sleeper because infancy is the most active phase in a turtle’s life. So, if your baby turtle likes to sleep a lot, then factors such as water temperature, poor health, unhealthy diet and dirty water could be the reason behind it.

Why Do Baby Turtles Sleep A Lot?

There are several reasons behind a baby turtle sleeping a lot. But usually, the cold temperature in your water tank could make your baby turtle sleep and store heat in his body. Turtles in the wild too go for brumation when the temperature starts to droop low during winter.

Turtles are slow creatures who love to sleep, but if you are seeing your turtle sleeping all the time, it’s time you determine what could be the cause behind it.

But before discussing the common reasons, let’s rule out some natural factor which is causing your baby turtle to sleep a lot.

It is common for baby turtles to sleep for longer duration in winter.

Also, there’s a lot of commotion in our house during the day. People come and go, and it’s all during the daytime. Another reason behind a captive turtle getting diurnal is because of the internal environment which we put him in.

Turtles in captivity are put in a conditioned environment where they are provided with every facility. They get proper water temperature, UVA-UVB lights, food that is both tasty and nutritious for them, and many other facilities. This is the reason turtles become diurnal in captivity.

Despite providing all the necessities for a turtle to thrive, they try to go into brumation. Brumation is the prolonged inactive phase of a turtle where he rarely eats and slows down his metabolism rate. A turtle’s body uses significantly less energy in keeping its body functioning. During brumation, a turtle will remain inactive and sleep a lot. This is usually the case during winter.

So, if your turtle is getting all the tank requirements yet sleeps a lot, it probably might be brumating. So, it’s all normal.

Now that you think that is not the case, then let’s discuss what other reasons could be behind why do baby turtles sleep a lot.

During winter, the temperature will drop, and turtles genetically will get the sense to sleep. Baby turtles, too, will sense this and will go into brumation. Turtles are cold-blooded animals, so their body metabolism will act accordingly and go into hibernation.

Turtles sense the air pressure dropping and lower humidity. If you are not using the heater for your baby turtle’s tank, they will sense that winter is coming and slow down their metabolism.

Your baby turtle will typically sense winter if you haven’t installed a water heater, or you have turned it off for a long time. Check your water temperature using a thermometer, and you will know whether your water heater is functioning.

So, maintain above the minimum temperature of water for your turtle according to their breed, and you will find them revitalized if the low temperature is the case of your baby turtle’s oversleeping.

Turtles need a basking area where they can get enough UVA and UVB rays. In the wild, turtles bask for hours under the sun and get enough UV rays and heat. As they are cold-blooded animals, basking under the sun helps them maintain their body temperature. Absence of basking spot will cause your turtle to feel cold and will sleep for a longer duration to control its body temperature.

Therefore you need to make a basking space for your baby turtle in your tank. Pile up rocks inside your tank. The basking area should be dry, and water in your tank shouldn’t reach the spot, for the UV lights get a UV light which throws off both UVA and UVB light in that spot. You shouldn’t put the UV lights too close to the basking spot because it might burn your baby turtle’s shell if he basks for prolong period.

Here’s a full spectrum, mercury vapor bulb I use in all of my turtles’ basking stations. It emits both UVA and UVB space – saving me some space and hassle of installing two bulbs. It comes with 6000-hour lifespan and six-month warranty, but I haven’t ran into any problems yet!

Whenever a baby turtle is sick, he will show signs of lack of appetite and lethargy. Almost all diseased turtles show these signs. But be extra aware when they are inactive during the baby stage.

If a turtle is unhealthy and sick, he will sleep for a longer duration. You need to know what’s wrong with him and put him under medication immediately.

This deficiency occurs in baby turtles when they lack a comprehensive diet. Lack of vitamin A change the epidermis layer of turtles and affects the mouth, eyes and kidneys. If your turtle lacks Vitamin A, he will show signs of lethargy, appetite loss, swelling of eyelids, and puss discharge from the eyes. A baby turtle won’t be able to heal himself, thus goes inside his shell for days.

You need to change his diet. A baby turtle diet mostly comprises meat products to provide him with protein for growth. For veggies, include plenty of green, leafy veggies that are rich in vitamin A.

Bacteria cause respiratory infections in baby turtles, causing them to release excess mucus from their mouth and nostrils. They will show signs of lethargy and will sleep for an extended period. Respiratory infections, if not treated, can be fatal and result in chronic pneumonia in baby turtles. Their swimming posture will be wrong and can be seen swimming in a tilted position, eventually drowning.

Shell infections are one of the common diseases in turtles. Baby turtles develop algae and fungi parasites under their shells. Wounds and scratches often cause this. These infections, if severe, can cause an ulcer in your turtle’s shell. A diseased baby turtle shows sign of lethargy and won’t eat even if you place their favorite food in their vicinity.

How To Maintain Temperature For Your Baby Turtle?

Get a durable water heater which will keep your baby turtle’s habitat warm and cozy. For UVB Rays, get a UV light which throws both UVA light and UVB lights. UVB lights aren’t usually popular with humans as it causes skin cancer, but you need not worry about turtles because both UVA and UVB is beneficial for them.

How Long Do Baby Turtles Sleep?

Baby turtles sleep about 4 hours a day. This is lesser than adult turtles who sleep about 7 hours a day. You shouldn’t disturb his sleeping cycle or he will be stressed and won’t be eating. Both baby and adult turtle do not have a significant sleeping pattern, only the duration of their sleep.

Baby turtles will come to the surface every few hours, take a gulp of oxygen, and sleep underwater. Baby Box turtles, however, will sleep in the land and show terrestrial characteristics.

How To Tell If A Baby Turtle Is Sleeping?

Baby turtle can sleep with legs extended or retracted into their shell. A baby turtle will find its comfortable spot and close their eyes while sleeping. Some turtles retract their legs while sleeping, as it is in their survival instinct to do so.

Where Do Baby Turtles Sleep?

Baby turtles will find their most comfortable spot and sleep. Mine sleeps under rocks where there is dim light and which it finds strategically protective against other predators (even though there’s only him in the tank).

Some baby turtles sleep on the surface and some in the tank’s base. Some turtles even sleep while floating. However, as they grow older, they will find that place which makes them comfortable and take a nap.

Final Words On Do Baby Turtles Sleep A Lot?

Turtles sleep a lot, especially when the water temperature is low. Turtles know the changing of weather by sensing the humidity level in the air and will try to hibernate even in captivity. That is why if your turtle sleeps around this time, then it could be his innate nature to do so.

This isn’t the stage where turtles sleep a lot. Infant stage of a turtle is the most active period in a turtle’s life. However, if your turtle rests a lot, then you need to know that there’s something wrong with him.

Can Turtles Get Fat—How To Lose Your Turtle’s Weight

What Can Turtles Eat From Human Food? Avoid These Food

Do Turtles Change Color – Reasons Behind Why They Lose Color