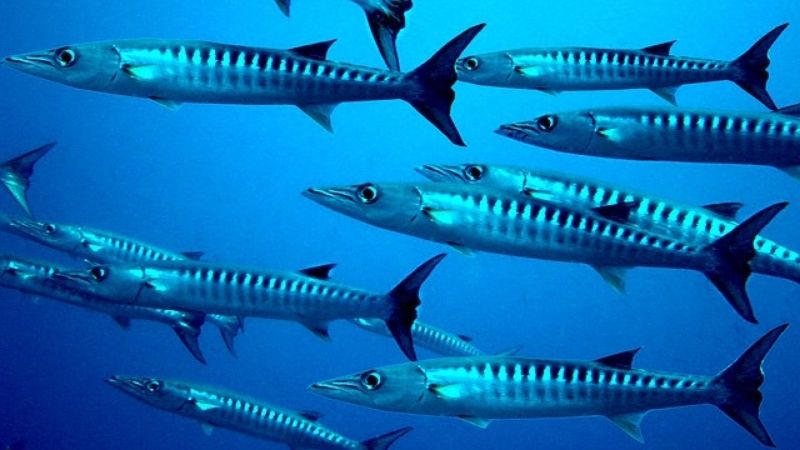 Do barracudas eat clownfish? If you’re googling this question, I’m sure you recently watched the movie, Finding Nemo. And let me tell you, that movie got a couple of vital things wrong.

It didn’t just give barracudas a bad name but also pretty much altered clownfish’s biology and reproduction process to suit Disney’s storyline.

In this blog, I’ll tell you everything the movie got wrong about clownfish, barracudas, and blue tangs (Dory).

So no, they normally don’t eat clownfish or clownfish eggs. That being said, we cannot rule out the possibility 100% if the opportunity arises.

Before we discuss what else the movie Finding Nemo got wrong, let’s have a closer look at the widely misunderstood fish, the barracudas.

Who Are Barracudas? Where Are They From?

They are saltwater fish belonging to the Sphyraena genus, the one and only genus in the Sphyraenidae family. They were first described only over 200 years ago, in 1815 by Samuel Rafinesque.

Barracudas are found in subtropical and tropical oceans across the globe – ranging from the Atlantic Ocean’s eastern border to the tropical areas of the Pacific and the Indian Ocean. They’re also often spotted in the Red Sea and the Caribbean Sea.

What Do Barracudas Eat? How Do They Hunt?

Needless to say, barracudas are ferocious. They’re also cunning, opportunistic eaters. Do you know they rely on surprise attacks and short bursts of speed to attack their prey? When in assault mode, these fish can move at a speed of up to 27 mph (43km/h).

Barracudas eat both big and small fish. They snack regularly on an array of prey, including fish like mullets, killifish, herrings, small tunas, snappers, groupers, jacks, grunts, and anchovies.

Their favorite target is to attack a school of fish, charging headfirst and biting at them with jaws.

When consuming bigger fish, they tear chunks out of their prey. And when gulping small ones, they simply bite them in halves or swallow them whole.

These fish compete fiercely with needlefish, mackerels, and even dolphins for prey. They are usually found swimming near the surface or seagrasses searching for schools of plankton-feeding fish.

They’re super tricky for prey to detect, thanks to their elongated, silver bodies.

Barracudas heavily rely on their eyesight to detect their next meal. As a result, they are quick to identify anyone or anything that has an unusual color, movement, or reflection.

Do Clownfish Mate For Life? How Finding Nemo Should Have Ended?

How Fast Do Clownfish Grow? Answers For Every Species!

Well, barracudas grow about 3 feet long and weigh more than 100 pounds. So, I highly doubt fish eggs are going to satiate their appetite. Cudas are better off hunting tunas and mackerels. Despite what Finding Nemo showed, they seldom devour fish eggs.

Clownfish eggs are barely 3-4mm big. There’s a saying in my native language, when roughly translated to English, goes something like this: A cumin seed in an elephant’s mouth.

You got the idea, right?

Now, let’s quickly skim through what kind of relationship barracudas share with humans before addressing what the movie Finding Nemo got wrong.

There are over 30 species of barracudas. And they can grow up to 5 feet long and weigh over 100 pounds. But they are still not overpowering enough to eat an average-sized human. However, they can attack and lead to grave injuries.

Depending on the severity of the attack, risks of loss of tissue and lacerations are always present.

There are several reports of swimmers being bitten by barracudas, but luckily no loss of life has been reported so far.

In 1996, a barracuda measuring 7 feet long and weighing more than 100 pounds reportedly attacked a human. And in 2010, a barracuda jumped out of the water and struck a kayaker in Florida.

Barracudas are pretty popular among hobbyists as both food and game fish. They’re often made into steaks and filets. Reportedly, their skin stinks. But once you skin them, the flesh tastes great.

Barracudas have a milder taste than anchovies but a stronger fish flavor than white fish like haddock.

In West Africa, a barracuda is a delicacy smoked to be used in sauces and soups. Apparently, smoking protects the flesh from disintegrating in the broth while lending a smoky flavor.

The meat is white when raw. However, once cooked, it turns into a pinkish-gray color.

Generally, it’s recommended to avoid eating barracudas under 5 feet since they contain a higher concentration of toxin called ciguatera.

And unfortunately, people who suffer from ciguatera poisoning often display signs like limb weakness, gastrointestinal discomfort, and an inability to tell hot from cold.

Apart from the possibility of ciguatera poisoning, barracudas also bring along the risks of parasitic infestation. Numerous fishermen have reported finding a plethora of parasitic worms in a barracuda’s belly.

However, as long as you gut and clean the fish thoroughly, it’s perfectly fine to eat them.

Barracudas are heralded among the best deep-dropping baits when fishing for groupers or snappers. Hobbyists and professionals alike use barracuda as bait to fish in open waters for swordfish, tuna, and sharks.

The most common method of using barracuda as bait is cutting it into chunks or strips and using them as cut baits.

What Happened To The Barracuda After Finding Nemo?

The only time we see barracuda in Finding Nemo is when he attacks and eats Coral and her eggs.

The fearsome fish is not seen again throughout the rest of the movie. But interestingly, the same barracuda appeared as an easter egg in another Disney/Pixar film, Toy Story 4. The fish was stuffed and mounted in display at the Second Chances antique store.

That’s karma, I guess. Serves it right after what it did to poor Coral and her eggs.

Now that you know everything there’s to know about the mighty barracudas, I’m finally going to address two things that the film depicted wrongly.

Besides conducting a smear campaign against barracudas, Finding Nemo got two critical things wrong. First, the lives the rest of the clownfish led after Coral’s (Nemo’s mom) demise is portrayed incorrectly. Second, Dory is pictured to be a goofy, fun, and kind-hearted fish. But that’s a far cry from reality.

How Should Finding Nemo Have Ended?

Marlin’s wife Coral gets swallowed by a barracuda as she tries to defend her eggs. Marlin tries to fight the barracuda but gets knocked unconscious back into his anemone.

When he wakes up, he finds his loving wife and all of the eggs gone except one, which goes on to hatch and become little Nemo.

Now, here comes the exciting part. All clownfish are born as males. They are sexual hermaphrodites who can later turn into a female.

A group of clownfish usually consists of 5-6 fish, in which the biggest fish always transitions to become a female. Its testes get dissolved, and ovaries grow prominent as the change happens.

The second-largest fish in the group is the breeding male. He will fertilize the alpha female’s eggs and ensure the continuity of their lineage.

The rest of the group members are sexually immature males positioned far down in the pecking order.

In nature, if the alpha female dies, the breeding male takes on the vacant position. So yes, he changes sex and becomes a female.

Then, the biggest fish among the sexually immature males becomes the breeding male.

The new pair will then mate and produce hundreds and thousands of young offspring.

So, when Coral gets eaten by a barracuda in the film, Marlin should have turned into a female since he is the breeding male.

And since Nemo is the only other clownfish present in the anemone, he should have turned into a ‘breeding male.’

Yes, your suspicion is correct. Marlin, now a female (maybe Marlyn), would have mated with Nemo, the breeding male, after Coral’s demise if the story depicted what really happened.

If you want to read up more on these gender-bending marvels in depth, I’m sure you don’t want to give this article a miss.

We all love Dory’s character in the film. In fact, we showered her with so much love that Pixar blessed us with a sequel monikered Finding Dory, where the goofy, lovable sidekick turns into the main character.

However, in reality, Blue Tangs, on whom Dory is based, don’t make great pets.

Your Dory belongs to a group of fish called surgeonfish that are notorious for stinging threats with the sharp spines of the tail. Therefore, they don’t make good additions to just about any saltwater tank.

Plus, they get too big for your standard saltwater tank and demand a humongous amount of space. So naturally, the cost of raising them is significantly high. It’s estimated that it can cost anywhere between $3000 to $10,000 on average to raise a single blue tang fish.

And lastly, blue tangs are incredibly prone to marine ich. 9 out of the 10 times you introduce them to a home aquarium, they will bring the dreaded parasite alongside.

If you want to read up on why Blue Tangs don’t make terrific pets and are potentially illegal to own, I’m sure you’re going to love this article.

Related: What Kind Of Fish Is Dory?

What Eats Clownfish In Coral Reefs?

In coral reefs, clownfish are eaten primarily by a group of fish called piscivores. This group consists of different fish like groupers, sharks, and eels.

Do Male Clownfish Eat Their Eggs?

Male clownfish only eat eggs that he deems are non-viable. As a matter of fact, male clownfish are designated egg-sitters and are super diligent at their job.

As the movie Finding Nemo showed, males have a strong parental instinct. So they care for the eggs meticulously.

Do Female Clownfish Eat Their Eggs?

Like male clownfish, female clownfish don’t eat their eggs under general circumstances. However, they eat infertile, damaged, or rotten eggs that pose the risks of spreading germs to the rest of the eggs.

During their first few spawnings, female clownfish are also known to consume eggs since they are highly stressed and have only a little idea about what’s really going on.

Yes, clownfish eat clownfish, but only if it’s dead. They don’t attack and eat live clownfish. Like most fish, they are highly opportunistic. Therefore, if a dead clownfish is lying around in the vicinity, they don’t hesitate to take a bite or two.

Finding Nemo did the barracudas dirty. Unlike shown in the film, these 3-feet big monster fish don’t really have an appetite for small fish like clownfish or their even smaller eggs.

When in the attacking mode, barracudas can move swiftly at 27 mph (43 km/h). And it does so to snack on meatier prey like tunas, herrings, mullets, jacks, and groupers.

How Many Gallons Does A Clownfish Need? Answers For All Species!

How Do Clownfish Sleep? Upside Down?