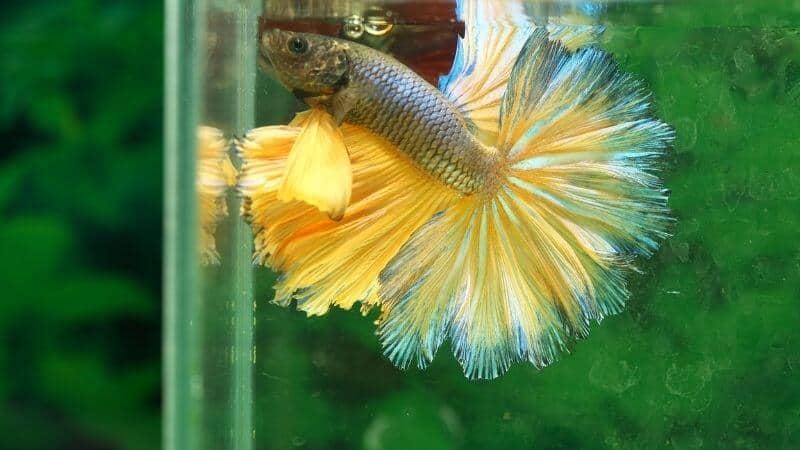 You might wonder if your betta could see how beautiful his fins color is and appreciate himself (narcissist fish alert). It can be more like, can betta fish see color just like us humans do. You might have seen him being aggressive to other colorful fishes in the tank. So, do betta fish see color?

Do Betta Fish See Color, and If Yes, How Similar is it to a Human Vision?

Yes, Bettas see color and can identify a whole bunch of color spectrums than any other pets. Yes, they recognize color better than your dogs! Not only bettas but fish, in general, can see more colors than humans. Some fishes can even see ultraviolet colors.

What Colors can Bettas See?

Bettas can see blue, green, red, yellow, and 300 more! However, the shades and hue they see might be slightly different than ours.

Bettas are short-sighted. It means they have excellent eyesight on shorter distances. Just like humans, their retina has two photoreceptors – rods and cones.

The rods help in detecting low-intensity light, and cones are for high-intensity. Mainly cones are the ones that are responsible for distinguishing the variants of color in bettas.

The fact that bettas can distinguish different colors is one reason they are aggressive to specific colors. Fish keepers have often reported that their bettas get aggressive when they see red color.

Can Bettas See at Night?

No, bettas cannot see at night. It is because their iris have slow functionality. A Slow iris functionality results in delayed adjustment when there’s low light intensity.

Another reason is that bettas have lesser cones than rods. This makes betta a diurnal species. If it had more cones than rods, it could easily see in the dark like other deeper dwelling fishes.

But, you might have heard that bettas live and hunt in murky waters. So, if it isn’t able to see in the dark, how does it thrive in such places?

Here’s a thing you should know about betta.

Lateral lines are the Neuromasts, which are dispersed over large portions of a fish. To put it in simpler terms, you can see these lines on the body of a fish. These lateral lines help in detecting minute changes in water motions caused by prey or predators. In the case of bettas, they have a developed lateral line.

So, Do Bettas Get Afraid in the Dark?

Yes, most bettas do get afraid in the dark, especially when you turn the lights off. It is due to the adjustment time their iris require to adapt to the darkness. Thanks to the developed lateral lines that they won’t be bumping into other fishes in the dark. These lines let them steer clear from the edges of the tank too.

So, Should you keep lights on all-time in the Aquarium?

No, you don’t need to keep lights on all the time. Bettas like to be active in the daytime, whereas they want to rest and sleep at night. Just because they don’t have eyelids like us doesn’t mean they don’t sleep. Yes, they do sleep, and at night, they too need proper rest.

Can the Light Blind Bettas?

Yes, they can be blinded by the lights. Unlike humans, bettas have slow dilation of the iris, which means they need about an hour to adjust to the sudden change in lights. That’s why you should first turn on the lights of the room where you have kept your betta first. Then only, you need to turn on the aquarium light.

Is There Such Thing as Too Much Light for Bettas?

Yes, it depends whether you are using natural or artificial light. Natural lights won’t lead to problems; however, artificial lights may cause some issues. Too much light will cause your betta to be overstimulated.

Even though bettas are active during the day, they like to rest for a while, even in the daytime. If there’s overexposure to light, then your bettas won’t get enough rest and will be restless. This eventually will lead to anxiety and stress in your bettas. A stressed betta won’t be able to feed properly, resulting in bettas being vulnerable to diseases.

And, What About Bettas Not Getting Enough Light?

If you keep your betta deprived of light during the day, then it will harm him. Bettas, deprived of light, especially natural lights, will start to lose their beautiful colors. Often you will see the shades of his vibrant colored fins turning into greyish and dim.

Moreover, if you want your betta to spawn in the aquarium, then too much darkness in an aquarium isn’t the right environment for them to copulate.

By now, you must have known that bettas can see color just like us humans. Shades are the only thing that can differ between our vision and theirs. The fact that they can see colors makes them an intelligent creature. Yes, they can easily recognize their owner, which is a warming thing to know for every fishkeeping enthusiast.

And yes, you do not need to worry about your bettas bumping into other tank mates as they possess highly developed lateral lines, which helps them to find their way in the dark.

Here, I have a comprehensive guide book on betta, which I have found extremely useful in keeping my bettas healthy and happy. You can get yours now on both hardcover and on kindle.