Do Cherry Shrimps Eat Hair Algae? What About Blue-green And Black Beard Algae? 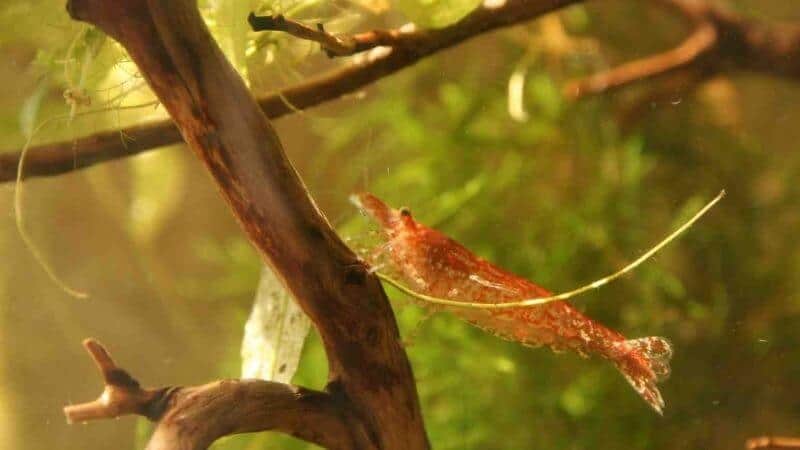 When I first bought a pair of cherry shrimps, frankly, I didn’t know about their cleaning prowess. They would quietly sit at the bottom of the tank and nibble on algae and biofilm. It definitely helped to keep my tank clean and pristine for a long time. But do cherry shrimp eat hair algae?

Long, wispy threads capable of growing up to 20 centimeters! Even the most seasoned aquarists have a hard time getting rid of hair algae. So, will cherry shrimps come to the rescue?

In my experience, cherry shrimps do nibble on hair algae, but they cannot completely eradicate it. So, when I dug through dozen forums, I was quite surprised with the answers I found.

One user claimed that his cherry shrimps consumed every shred of hair algae over a couple of days. And I did find a couple of other ‘testimonials’ like this across various platforms.

However, the most common answer was that cherry shrimps only ate hair algae if they didn’t have any other option.

So, are there any other creatures that are actually better than cherry shrimp at this?

How Long Do Amano Shrimps Live? Why Is My Amano Dying?

Besides cherry shrimp, the best hair algae eaters are:

You can also train livebearers like guppies, mollies, and platies to eat hair algae. However, at most, they’ll only nibble on it here and there.

One user in a forum swore that rudolph shrimp ate every bit of hair algae in the tank. So, you may want to give it a shot!

Between cherry shrimp and amano shrimp, it’s actually a tie. Both shrimps can eat hair algae, although it’s rare that they will totally eradicate it. However, it’s far easier to raise and breed cherry shrimps.

So, especially if you’re a beginner, I think it is wiser to give cherry shrimps a try first!

How Do Cherry Shrimps Eat Algae?

Cherry shrimps pick algae off the surface using their tiny legs before lifting it to put it inside the mouth. They can even attach themselves to the algae while eating it. Given their petite size, they can easily access all sorts of nooks and crannies to devour algae.

If you have a group of cherry shrimps, you’ll notice that they usually move and eat together. They’ll completely feed on one portion of algae before moving onto another.

While there definitely is a pecking order in place, cherry shrimps are docile creatures that won’t fight over resources.

How To Get Your Cherry Shrimp To Eat More Algae?

Getting your cherry shrimp to eat algae could be a challenge if his taste buds are used to tasty supplementary food. So, make sure to gradually cut the portion of extra food he’s receiving over days. Also, it’s vital to get the correct number of shrimps in the first place, to begin with.

Get The Number Right

If you have only one or two cherry shrimps in the tank, it’s easy to assume they aren’t eating up your tank’s algae. However, most probably, they’re just understaffed. So, it’s crucial to get the correct number of cherry shrimps in your tank.

The standard practice is to add 2 to 5 cherry shrimps per gallon. Then, if your tank has the capacity, add a couple of more cherry shrimps. They’ll usually move in groups and forage on algae.

It’s unfair to assume your cherry shrimps will readily eat all kinds of algae. For example, they usually don’t go after blue-green algae, staghorn algae, and green spot algae.

So, if you have any of these in your tank, you should not count on the cherry shrimp to clean the tank. Manual action is required.

It’s obvious that if your shrimp has just snacked on some tasty meal, he’ll not forage on algae. Thus, you should moderate the amount of supplementary food they’re receiving.

However, this should happen gradually. A drastic change in diet could make them weak and vulnerable to diseases.

Cherry shrimp cannot survive on algae alone. Even if they do for some time, they’d be sick and fragile before their lives are cut too short. You should fortify your shrimp’s diet with protein and calcium-rich food, which will ensure proper development and molting.

Most fish food that comes as pellets and flakes are good for your shrimp as well. But just make sure the food doesn’t have high traces of copper.

Now, let’s move on to the types of algae that cherry shrimps will and will not eat.

What Kind Of Algae Will Cherry Shrimp Eat?

While cherry shrimps aren’t too picky about their food, they definitely prefer soft algae varieties. So, besides hair algae, you can count on them to munch on brown algae, green algae, and even black beard algae.

Brown algae are made of up diatoms – minute creatures you cannot look at with bare eyes. The formation of this algae is a sign that the tank’s water chemistry isn’t balanced.

The slimy layers of brown algae won’t just coat the aquarium’s walls but also the substrate, decorations, and plants. Thus, there’s a good chance your plants will die due to a lack of photosynthesis.

While cherry shrimps can get rid of this algae, it’s best not to wait it out. Given the soft texture, you can simply rub it off to get rid of it.

Green algae outburst is caused by the sudden proliferation of suspended algae called phytoplankton. Unlike most algae that grow on tank walls and objects, it flows on the water and multiplies by billions with a short span!

Cherry shrimps do eat green algae, but it’s best not to rely on them too much since it grows so fast and so much.

Black beard algae are made up of very fine strands or tufts that grow in thick patches that actually look like a beard. It usually grows on the edges of leaves of low-growing plants like java fern and anubias. Once it makes its home in the leaf, it’s super hard to get rid of it.

Your cherry shrimp will take small bites, but that won’t suffice to get rid of it at all.

What Kind Of Algae Will Cherry Shrimp Not Eat?

Blue-green algae is actually a bacteria. This algae gives off a very musty smell, which makes it detectable quite soon. It’s basically caused due to excess light and ammonia in the tank. A dirty filter or substrate is also to blame.

Most algae eaters, including cherry shrimps, will steer clear of this algae.

Green spot algae manifest as thin, circular, bright green spots that stick very firmly to the glass or any other hard surface. It’s usually caused by too much light and nutrients or low levels of phosphate in the tank.

Getting rid of this type of algae could be quite a challenge. You’ll have to use scrappers, razors, and lots of elbow grease. Since green spot algae are usually so minute, cherry shrimps have a hard time eating them.

Yes, cherry shrimp will eat hair algae. Besides that, they will also eat green, brown, and black beard algae. However, they’re incapable of eating green spot algae and blue-green algae.

Although cherry shrimps can eat a fair bit of algae, it’s entirely unrealistic to rely entirely on these little creatures to tackle the algae bloom.