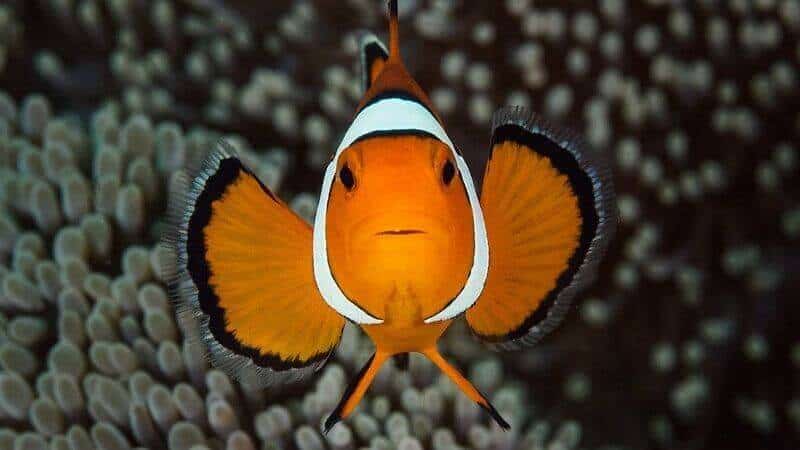 Do you know over 80% of the oceans have never been explored, mapped, or even seen by humans? We don’t know much about what lurks underneath. So, even though there’s a whole feature film dedicated to clownfish, truth be told, there’s still a lot that we don’t know about these fish.

For instance, let’s talk about their anatomy. Unfortunately, we don’t really know how their bodies have evolved or operate. Do clownfish have teeth? If yes, what do they look like?

In this blog, we will discuss all of these questions and some more. By the end of this article, you won’t just learn do clownfish have teeth or not but also the unique sounds they produce and the looming risks of tumors in their mouths.

So, let’s get started!

Do Clownfish Have Teeth?

Yes, clownfish have teeth. However, they don’t have teeth in their jaws as mammals do. Instead, the teeth are located in the throat and are known as pharyngeal teeth.

That being said, some species of clownfish, especially bigger ones, do have tooth-like projections right in their mouth.

Clownfish don’t grow too big, but they definitely pack a punch. Keep reading to know more on this below!

Didn’t come as a surprise at all.

Before we decode why clownfish resort to this not-so-polite greeting style, let’s find out how it feels to be bitten by a clownfish.

Here’s an adorable video of a clownfish chasing and biting a hand.

Clownfish bites don’t really hurt much under general circumstances. It feels like scraping your finger on sandpaper. But if you have a bigger specimen that managed to fully sink its teeth into the skin and then clench its jaw real tight, it will hurt.

In that case, it’s going to feel like your finger is being pricked by multiple pins at the same time.

Below, I have pooled a few responses on what a clownfish’s bite feels like and if it hurts or not.

Note: All the answers stated below purely belong to their respective authors.

“I have a mated pair with eggs. The female nearly took my arm off yesterday! And then she even jumped out to get me again.”

“My clownfish waited till I was not expecting it and then hit me! It didn’t really hurt bad but definitely made me jerk.”

“I have a pair of clownfish in a 32-gallon biocube. The female bites small chunks of skin off my hand every single time I stick it in the tank. She even nearly jumps out of the water.”

“I think I am extremely lucky. My female clownfish only nibbles at me to ask where her food is. There’s absolutely no aggression from her or her mate.”

“They can bite. They will almost always make you jump. I have one clownfish that almost always attacks my hand even when I am working on the other end. The fish will bite at my rings and pull hair on my hands. It hurts sometimes.”

“My tomato clownfish bites anything that goes inside the tank. Whether it is snails, my fingers, or even the mag-float!

“My false percula draws blood, She goes for the skin between the fingers!”

“My local fish store has a big (almost 6″ long) female maroon clownfish in a 90-gallon tank. And she’s downright a terror. Trust me, no one wants to do maintenance on that tank. The guys swear the fish always attacks the most sensitive parts of their hands.”

“I just had my hand in the tank to get rid of a hitchhiking snail, and my clownfish bit my wrist. It caught me off guard. So I quickly ripped my hand out of the tank.”

So, gauging by the answers shared above, it’s clear that clownfish have a knack for biting, and it’s pretty painful! So be careful and always wear gloves.

How Many Teeth Do Clownfish Have?

Unfortunately, no research has been carried out yet to determine how many teeth clownfish have. So, we don’t really know the answer. But judging by the number of teeth similar-sized fish have, we can estimate that clownfish have a dozen or two pearly whites.

Clownfish bites don’t usually leave marks. At worst, the bites can make the bitten spot red and tender for a few minutes. If it hurts, apply ice to it, and you should be fine!

Why Do Clownfish Bite?

Clownfish are nothing like the naive or unwitting clownfish shown in Finding Nemo. Actually, they’re quite territorial and aggressive. Don’t go by their size or peppy colors. These fish pack a mean temper.

The following are some reasons clownfish bite the hands that feed and their neighbors:

These are just a few reasons why clownfish resort to biting. Of course, any animal in the world would turn to attacking when they find themselves in a flight or fight mode.

To make sure you don’t get bitten the next time, be gentle when cleaning the tank. Don’t go around poking your hands just about anywhere. The fish won’t find it amusing.

And to ensure the clownfish doesn’t attack fellow tankmates, you should make a provision for ample space and resources, compatible neighbors, and a peaceful environment.

Which Clownfish Species Are More Likely To Bite?

There are at least 30 known species of clownfish. And among them, the ones with the meanest temperament are maroon clownfish, saddleback clownfish, and tomato clownfish.

Frankly, I couldn’t give out as much information as I expected to answer whether clownfish have teeth or not. So this is the best I could come up with.

But before we end this blog, I’ll let you in on some interesting facts about these much-loved anemonefish.

Your Clownfish Is Quite A Chatterbox!

Fish communicate in a number of ways. Most use their swim bladders or rub their bones together to vocalize. Some, like herrings, suck in air through the esophagus and blow it out the anus speedily.

But clownfish have a rather unique method of communicating. They raise their heads, shuffle the bones in their mouths, and close their jaws. The slamming sound of teeth produces a noise that’s amplified by the jaws.

Scientists from Virginia Commonwealth University used high-speed clips and X-rays to peek inside the noisy fish.

And what they found is that as the fish opened and raised their mouth in a certain way, special ligaments on the jaw snapped the mouth shut, resulting in the fish’s teeth banging together.

Clownfish produce the clicking noise to defend their territory. If the intruder still doesn’t heed this warning, the fish will attack!

Possibilities Of Tumor In Your Clownfish’s Mouth

A study carried out by the University Of Florida on two long-finned ocellaris clownfish showed that both fish had odontomas in their mouths. Odontomas refer to benign tumors linked to tooth development. It looks as if dental tissue has grown irregularly.

Although it’s highly unlikely that your little clownfish will experience this condition, we can still not entirely rule out the chances. And if the tumor grows too big, the fish will have difficulty swallowing food.

Therefore, if you suspect anything odd is growing inside or around your clownfish’s mouth, consult with a veterinarian right away!

Uninvited And Undesirable Guests Inside Your Clownfish’s Mouth

A closer inspection of a clownfish’s mouth revealed that almost all clownfish have a hitchhiker residing inside their mouths. And it’s none other than freeriding, parasitic crustaceans called isopods! This discovery was possible thanks to the research team from Australia’s Queensland Museum.

Apparently, isopods first enter the host fish’s body as a juvenile through the fish’s gills. They then travel to the mouth cavity and firmly attach themselves to the fish’s tongue with the help of hook-like appendages.

The isopods feed directly from the fish’s tongue by sucking the blood – similar to what female mosquitoes do.

As the isopods feast on the fish’s tongue, their bodies swell and often nearly fill the host’s mouth. However, despite this nuisance, clownfish are still able to feed normally.

And they stay attached to the clownfish’s tongue long enough to complete their whole life cycle, which can take anywhere between 60 days to 1 year!

Do clownfish have teeth? Yes, of course.

Therefore, you can’t really see a clownfish’s teeth right off the bat.

Besides the obvious – tearing and chewing the food – the teeth also help clownfish produce certain clicking sounds to communicate with each other!

And as you tell from all the testimonials shared above, it’s safe to conclude that they have a thing for biting! So, make sure to use gloves when handling them.

Do Clownfish Mate For Life? How Finding Nemo Should Have Ended?