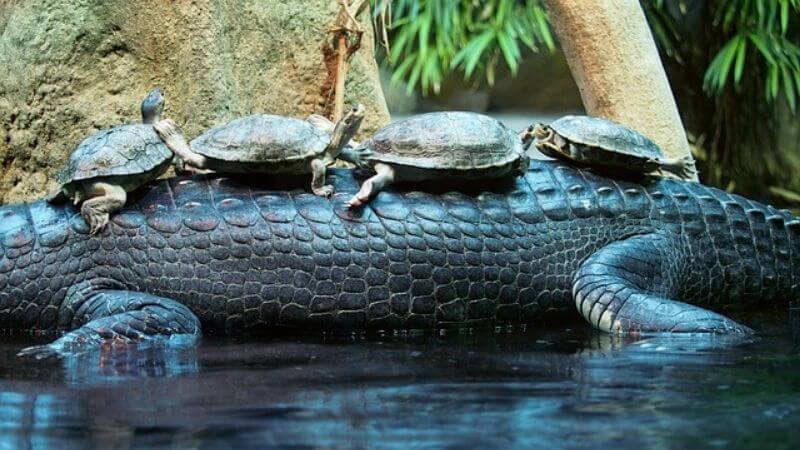 Yes, crocodiles have the highest bite force in all animal kingdoms. A sheer force of nature, their bite has been feared since prehistoric times.

Living near each other, do these two primeval neighbors ever get locked in a fight? And if the answer is yes, who wins? And will the winner eat the vanquished? These are some questions that tickle the geek in me.

So, today we will discuss whether crocodiles eat turtles or live together in harmony.

Yes, crocodiles can eat turtles when they are hungry. However, turtles aren’t the favored meal on their menu. Despite the turtle’s hard shell, a crocodile’s bone-crunching bite can exert a force of 3700 psi, which will be more than enough to crack open a turtle’s shell.

The poor turtles will be devoured in minutes.

Turtles can withstand over 1000 psi, which is 200 times their own weight. But, that will still not be enough to withstand a crocodile’s ferocious bite.

Crocodiles have been on earth for over 240 million years. Found across Africa, Asia, Australia, and America, they live in swamps, wetlands, rivers, and other water bodies.

Their bite force and dominance in the water have put them at the top of the food chain. Their keen hearing, smell, and eyesight are why they are the apex predators.

All 24 of them can bite with great intensity. However, the power may differ from species to species along with their size.

But, if compared pound to pound, even the smallest of crocodile species have a potent bite force.

Which Crocodile Has The Highest Bite Force?

Saltwater crocodiles have a bite force of over 3700 psi. They have an average length of 17 ft and weigh around 1000 pounds. However, some can grow up to 23 ft long and weigh 2200 pounds.

These crocodiles are found in the extended regions of Northern Australia, Eastern India, and Southeast Asia. They are well adapted to salt water and can spend weeks preying in the coastal areas.

How Do Crocodiles Eat Turtles?

Crocodiles are best known for their shrewd hunting style and can kill a turtle in several ways. They can swallow, bite, or do the infamous death roll to tear down a turtle’s flesh.

Crocodiles swallow smaller turtles, especially baby turtles, in a single gulp. Therefore, they will not go through the hassle of biting or chewing tiny turtles.

However, when it comes to eating larger ones, they have different plans.

Adult turtles have well-developed shells, large for a crocodile to swallow in a single gulp. So, the crocodile will have to crack the shell before they tear the turtle’s flesh.

Like leatherbacks, some sea turtles can weigh over 800 pounds, making them a hard target for saltwater crocodiles. The crocodile will use its infamous “death roll” to subdue the turtle in such encounters.

Crocodiles are devious at sneaking prey from nowhere. They share the same habitat as turtles and eat them when they are hungry.

Crocodiles can survive without food for months. However, in extreme cases of famine, they can go without eating for up to 3 years.

And when the starving crocodiles find turtles meandering in their territory, turtles will be the go-to targets for these ruthless Godzillas.

Crocodiles can easily overpower adult turtles. So, the story will be no different for baby turtles, whose shells are easily cracked open by these prehistoric carnivores.

Like turtles, crocodiles also venture on land to maintain body temperature, aestivate, bask, and nest. Therefore, they are pretty good at digging. And if they find turtle eggs during the excavation, they will definitely eat them.

Crocodiles, just like turtles, need to be on land to lay their eggs. Some species like the Nile crocodiles can dig their den up to 39 feet deep.

And if they discover any turtle eggs during the burrowing, they will devour them without any second thought.

Do Turtles Ride On Crocodile’s Back?

Yes, turtles indeed hitchhike on a crocodile’s back. Crocodiles live in shallow waters and often swim or lie idle on the water surface for hours. Because of that, turtles mistake them for driftwoods and bask on their back.

Here’s a cool video of turtles riding on a crocodile’s back:

When calm, crocodiles swim at a slow pace. So, turtles basking on the crocodile’s back will not get alarmed by its movement.

Even with a turtle on its back, crocodiles will not make sudden movements to dislodge the turtle. It is because the crocodile will risk alarming potential prey if it shows suddenness inside the water.

So, crocodiles usually remain calm even with turtles on their back.

Both crocodiles and turtles need UV rays to get vitamin D and maintain their body temperatures. So, you will find them basking together without any hostility.

But, this is a love-hate relationship, where the outcome is usually the turtle getting eaten by the crocodile.

Can A Turtle Kill A Crocodile?

Bigger species of turtles like the alligator snapping turtle can kill baby crocodiles and eat them. They can grow over 2 feet in length and have a bite force over 1000 pounds, which helps them tear off the crocodile’s hardy skin.

However, they are not the first-choice meal for the turtles.

Crocodiles have been the apex predators since dinosaurs, or even before that. They will undoubtedly consume turtles.

So, don’t be fooled by the videos of turtles riding on a crocodile’s back. The crocodile is just biding its time and will not sit on the fence when it gets its chance to crack open the turtle’s shell.