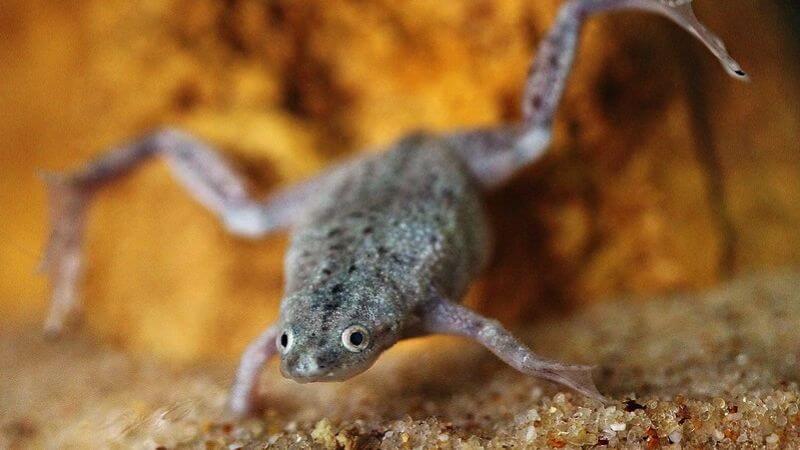 African dwarf snails are not picky eaters. Without hesitation, they will eat anything from bloodworms and shrimps to sinking fish pellets. But their plain sailing feeding behavior can sometimes come at a price.

Many hobbyists worry about their frogs eating other inhabitants in a community tank. And yes, that is a legit concern as they are known to consume other smaller tankmates, the ones that fit in their mouth.

So, what will be the fate of a snail if kept together with a frog? Will the frog leave the snail to its own devices, or is it likely that you’ll never hear from your snail again?

Frogs are snails’ natural predators. However, they will only eat the smaller ones that fit in their mouth. For example, adult African frogs prey on smaller snail species like ramshorns and nerites but leave bigger species like apple snails alone. They also eat baby mystery snails.

African dwarf frogs have a longer lifespan, about 5 to 8 years (some live up to 14 years). So, it will be a while before they get big enough to swallow snails whole.

However, once the amphibians reach full maturity, they will target not only snails but also fishes. I have seen these African dwarfs preying on tetras and guppies. As I said, they are not picky regarding what to eat.

But what about snail shells? Will your frogs eat them?

When a frog is about to swallow its prey, it won’t care if the prey has a shell or not. So, even with shells, your slimy pals are doomed.

Snails aren’t exactly renowned for their pace. So, once the frog sets its eyes on a snail, it is game over for the slimy gastropod.

Want to know how fast snails are? Check out How Far Can A Snail Travel In A Day?

So, the big question lies. Is it wise to keep them together?

Can You Keep Frog And Snail Together In A Tank?

Baby frogs and juveniles are no bigger than baby snails. So, you won’t have to worry about your snails getting eaten when they are all young. However, as the frogs grow, it won’t be long before the snails become their dinner. Hence, keeping frog and snail together in a tank isn’t recommended.

Snail species like apple snails and mystery snails can grow larger than frogs. And they grow quicker than frogs do.

So, keeping mystery snails or apple snails with African dwarf frogs together won’t pose a problem.

As for other smaller snail species – ramshorns, nerites, or assassins – sooner or later, they will be just another gourmet meal for your frogs.

What About Snails Eating Frogs?

No, snails won’t eat frogs. Most aquatic snails are herbivores and scavengers. They don’t hunt for live prey, let alone go after active frogs. Assassin snails are carnivores, but even then, they are much smaller than African dwarfs.

How Does A Frog Eat Snail?

Frogs do not have teeth, so they swallow their prey whole. Their tongues have retracting muscles, which work like a bungee cord. And once they spot a snail, they will knock loose their tongue, and the prey will be gulped within 15/100s of a second.

Although frogs can swallow smaller snails whole, some like to play and subdue their prey before gobbling them.

Here’s a short video of a dwarf frog eating a pond snail.

Should You Keep Frogs To Get Rid Of Snails?

Many hobbyists keep African dwarf frogs to get rid of pest snails. Their insatiable appetite makes them one of the best remedies to eradicate snails. But there can be consequences of keeping frogs.

Not only do they go after snails, but they can also target other fishes. For example, they often try to prey on smaller fish species like guppies, tetras, and danios.

Frogs will eat all kinds of meat they can fit inside their mouth. So, if a frog is larger than the garden snail, it will definitely go after it. And it won’t just stop at eating only one.

Especially during the rainy season, you will see frogs in your garden. This is because their hyper-sensitive smelling ability helps them track down snails that come out during the rain.

So, Is There A Way To Attract Frogs To Get Rid Of The Garden Snail Infestation?

Garden snails can cause all sorts of nuisance to your vegetable garden. They wreak havoc by eating leaves, stems, flowers, fruits, and vegetables.

So, if you are like me, who doesn’t want to use chemicals as a pest-controlling agent, frogs are your savior. And no, you don’t have to be a princess to like them.

Let me tell you how you can attract frogs in your yard.

Like all frogs, African dwarf frogs will eat anything they can fit inside their mouth. So, they will eat smaller snail species like nerites, ramshorns, and assassins if kept together in the same tank.

Frogs are natural predators of snails. They are carnivores and will use their keen smelling ability to track down snails. So, it makes them one of the best choices to get rid of pond snails.

What Fish Can Live With African Dwarf Frogs?

Frogs are one of the planet’s most refined predators. Their menu comprises almost anything smaller than them. And yes, frogs do eat snails. In fact, snails are the easiest and most abundantly available food for them to eat in the wild.

So, it can get tricky if you plan to keep an African dwarf frog with a snail in a tank. But if you are determined to make it happen, get larger snail species like the apple snails or mystery snails.