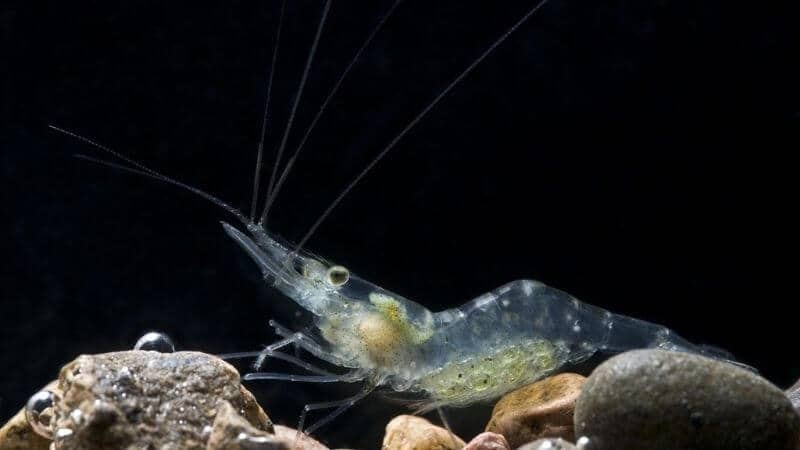 First discovered in the 1850s in North America, ghost shrimps are among the most veracious tank cleaners we know today. But let’s ask the real questions. Do Ghost Shrimp Eat Algae?

As omnivores, ghost shrimps will consume anything from animal waste to dead plants. So, to answer – do ghost shrimp eat algae? The answer is yes. They can eat most string- or bush- algae, although they don’t help much with film algae and black beard algae.

Although ghost shrimps are great cleaners that can get rid of most impurities in the tank, it’s not recommended to rely on ghost shrimps entirely for algae woes. However, since these creatures live in the bottom, you don’t have to worry about algae or slime growing in the substrate.

But the same cannot be said about the slimy algae growing on the tank’s wall or floating around the tank.

While ghost shrimps prefer string algae like hair algae the best, they will eat any algae they can get their mouths on. Though, there’s an exception. Like most shrimps and bottom feeders, they’re not too fond of black beard algae.

What Do Ghost Shrimps Eat?

In the wild, ghost shrimps will eat anything from live plants to animal matters. You can give brine shrimp, baby shrimp food, green veggies, small live food, and shrimp pellet food in the tank.

However, the list of food they enjoy isn’t just limited to the varieties mention above.

For instance, in the wild, they also love to nibble on eggs, larvae, and even small insects.

For pet ghost shrimps, you have even more options to choose from. You can give them daphnia, fish pellet food, flakes, fruits, squid, mosquito larvae, and insects.

And in fact, there’s a pecking order when it comes to feeding. The bigger ghost shrimps will always eat first have a say in the colony’s eating patterns.

What Do Baby Ghost Shrimps Eat?

Baby ghost shrimps’ diet differs significantly from their parents. They can nibble on algae and small bits of plant debris by themselves. You can also give crumble down the food into small size so they fit inside baby shrimps’ mouths.

When born, ghost shrimps are so tiny that you can barely see them. So, giving live food is out of the question. You should save for the time ghost shrimps get a bit older.

Now that the answer to do ghost shrimp eat algae is clear, alongside their other dietary needs, let’s look at a few things you should always consider when getting ghost shrimps.

6 Things To Consider When Adding Ghost Shrimp To A Tank

When raised right, ghost shrimps are precious creatures in any tank. But you need to consider some factors like the shrimp’s underlying diseases, their easy breeding abilities, their colonies, and the tank’s other residents’ attitude before adding ghost shrimps in the tank.

Ghost Shrimps May Bring New Diseases In The Tank

Unfortunately, ghost shrimps are often caught in the wild are poorly treated. Thus, it’s hard to decipher the shrimp’s genetic pool or the diseases it may be carrying.

Sometimes, ghost shrimps you buy from the store may come with some underlying infections caused by bacteria or fungi. If by any chance there are communicable, other tank mates, especially snails, may contract the infection soon.

Big fish love snacking on ghost shrimps so much that these clear guys are almost always sold as live food. For Instance, Gourami, Oscar, and Goldfish can easily gobble up an adult ghost shrimp.

If you have a big and aggressive fish, a ghost shrimp will have zero chances of survival in that tank. In that case, opt for a bigger variety of shrimp, like an Amano shrimp or species of algae-eating snails.

However, peaceful loaches like Kuhli and Zebra, in addition to cherry barbs, hatchet fish, and tetras, coexist with ghost shrimp peacefully.

Ghost shrimps are peaceful species that rarely go after tank’s residents. They will stay low key at the bottom and feed on dead and decaying matters alongside algae.

However, in some stances, they attack bottom feeders like guppies. It’s usually caused by the lack of enough food in the tank for the shrimps or stress due to the overpopulation problem.

I have come across several instances where people have bought and raised whiskers instead of ghost shrimp because of confusion. Since both species have almost transparent bodies, tails, and torsos, it’s easy to mistake them for each other.

While whisker shrimps do a decent job at getting rid of the algae, don’t forget that they are way more aggressive and will go after smaller creatures in the tank.

If the shrimp in question has claw arms as long as their body, know that it’s a whisker fish, not a ghost shrimp.

You Can Breed Ghost Shrimps Easily

One reason ghost shrimps are popular as food is that they’re quite easy to breed. As long as they’re kept in a healthy and stress-free environment, they’ll quickly multiply in numbers.

So, even if your fish eats up your algae eater often, you don’t have to worry about spending money and buying new ones every time. If you’re interested in ghost shrimp to your fish as live food, that’s a very plausible thing to do as well.

Add 3 to 4 Ghost Shrimps Per Gallon

Since ghost shrimps live in colonies, you will need to add at least five of them at a time. The general rule is to add 3 to 4 shrimps per gallon. To start, you can add about 20 to a medium-sized tank.

It is because ghost shrimps don’t have a long lifespan and can die quickly due to starvation. If you have other bottom feeders in the tank, adding ghost shrimps isn’t a good idea.

If possible, try to buy ghost shrimp from stores that have raised them to be kept as tank occupants, not someone’s lunch.

Another factor to consider is that ghost shrimps can produce a lot of waste—polluting the water quickly. Thus, you need to ensure proper filtration mechanisms in place.

How To Care For Ghost Shrimps?

By now, you probably know that ghost shrimps are incredibly easy to take care of. Once you establish a colony of healthy shrimps, there’s not much to worry about.

Ghost shrimps aren’t too specific about the tank’s water temperature or nitrate levels. However, they are quite sensitive to the pH level. The water should be slightly on the hard side—between a pH of 7.0 and 8.o.

If you want to sustain their colony, make sure to supplement food like algae cakes and shrimp food. If you notice pregnant ghost shrimps or larvae in the tank, you can also buy food specifically designed for baby ghost shrimps.

And don’t forget to add plenty of live plants and hiding places so they have a better chance of survival from predators.

As omnivores, ghost shrimps will consume anything from animal waste to dead plants. So, to answer – do ghost shrimp eat algae? The answer is yes. They can eat most string- or bush- algae, although they don’t help much with film algae and black beard algae.

Omnivore ghost shrimps will readily eat algae because it’s one of their primary food sources in the wild as well. They’re especially fond of bush-like and filamentous algae such as hair algae.

Since they’re nature’s scavengers, they also love to feed on old fish food, decayed food, and dead fish. But since they’re bottom feeders, they’re not much help when cleaning the algae growing on the water’s surface or the tank’s walls.

As long as you don’t pair ghost shrimps with big fish that’ll eat them up as snacks or bottom feeders who’ll compete for resources, you can easily maintain a healthy colony of ghost shrimps.

We are sure that these algae-eating machines will reduce the need for elbow grease drastically, but we don’t recommend that you solely rely on these hardworking creatures to tackle the algae problem.