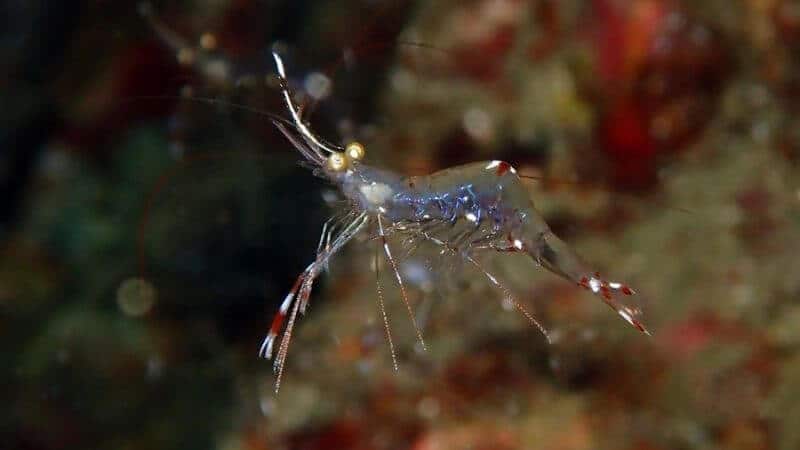 Bottom feeder ghost shrimps are best known for their algae-eating capacities. Scavengers, by nature, aren’t picky at all about what goes inside their stomachs. Now that brings us to today’s key question: Do ghost shrimp eat fish poop?

Ghost shrimps are known to eat fish poop that’s lying around at the bottom of the tank. However, fish poop isn’t a part of their natural diet in the wild. Thus, they won’t devour fish waste as they’d do on algae or decaying creatures.

In a well-matured tank, the fish poop will transform into bio-film. And usually, ghost shrimps will consume the biofilm—not feces directly.

While researching this article, I found an overwhelming number of shrimp owners who said their ghost shrimps eat fish poop and help keep the tank clean.

On the other hand, a small majority claimed that they’ve never seen their pets go after fish poop.

So, there’s no 100% certainty that your ghost shrimp will consume fish poop, but most likely, they will.

When consumed moderately, fish poop is neither good nor bad for ghost shrimps. Fish poop contains a fair amount of protein and minerals like phosphorus and potassium. However, it is also high in ammonia, which can harm your shrimps if consumed in high amounts.

Ammonia is highly toxic for shrimps—carrying the potential to wipe down the entire shrimp colony. Besides weakening the immune system and inflicting diseases, it also significantly hampers the shrimps’ reproductive capacity.

Thus, do not rely on ghost shrimps to take charge of the fish waste in the tank.

Fish poop can make up a small portion of their diet—like snacks—but should never be fed as a substitute for shrimp food.

Now that we’ve answered, do ghost shrimp eat fish poop and if it’s any good for them, let’s see if they algae or not.

Algae form a good chunk of a ghost shrimp’s diet in the wild. Thus, they’re one of the frontrunners among nature’s cleaning crew. Ghost shrimps will eat up most types of algae that bloom in a fish tank—making them fish keepers’ favorite pick for cleaning algae in the tank.

While ghost shrimps aren’t too fussy about the type of algae they get to eat, they love to munch on bush and string algae. Likewise, they aren’t too fond of black beard or film algae.

You can count on these bottom feeders to clean up the algae growing on the substrate or the tank’s bottom walls. But they’ll rarely eat algae that are formed in the water’s surface or upper portions of the tank.

Yes, ghost shrimps love to nibble on plants, whether it’s a live plant or a dead one. Usually, they feed on the decaying bits that have fallen to the bottom. Either way, ghost shrimps do not pose threats to your tank’s green like goldfish do.

If you have floating plants, you don’t have to worry since ghost shrimps will seldom swim to the top. At most, they’ll take a few bites of the plants rooted in the substrate—nothing substantial.

The mystery of do ghost shrimp eat poop or not is apparent. We’ve also decided if they eat algae and plants or not. So far, you might think that there’s not much effort you need to put into a ghost shrimp’s diet.

While that’s entirely not wrong, you need to ensure a diet precisely optimized for ghost shrimps to create a thriving colony. So, let’s find what they eat besides poop.

What do Ghost Shrimps Eat in Wild?

In the wild, ghost shrimps will eat just about anything they can fit in their tiny mouth—whether it’s larvae, micro-worms, or eggs. Algae and dead plants also make a considerable part of their diets.

As omnivore scavengers, ghost shrimps have a wide range of options to choose from in the wild.

What To Feed a Ghost Shrimp?

You have dozens of choices to choose from to feed your ghost shrimp. Provide them algae, algae wafers, live plants, mosquito larvae, brine shrimp, and baby shrimp food. Fortify their diet with green vegetables, fruits, frozen foods, flakes, and pellets.

A shrimp’s body naturally contains high amounts of fats and oils. Thus, they can easily digest fatty food compared to other species.

Protein and calcium are quite essential to promote growth in ghost shrimps. These nutrients facilitate easy molting and the development of a new exoskeleton. Thus, make sure that the food is rich in these two nutrients.

What to Feed a Baby Ghost Shrimp?

Baby ghost shrimps are so tiny that one has to concentrate on seeing them. So, they can’t eat adult-sized food. You can feed whatever you’d give an adult shrimp, but crumble the food first so baby shrimps can fit it in their mouth.

When young, shrimps molt at a faster rate than their adult counterparts. They’ll usually outgrow their shell in 1-2 weeks and molt right after.

Therefore, it’s vital to fortify their diet with food rich in protein and calcium.

As bottom feeders, ghost shrimps will eat almost anything that finds its way to the base of the tank. As scavengers, they also love to scrounge on dead and decaying materials, besides demolishing the algae.

When it comes to fish poop, ghost shrimps eat it as well but aren’t too keen about it. Ghost shrimps will seldom directly eat the fresh poop.

Usually, they’ll eat poop only after it has been turned to bio-film due to the tank’s parameters.

However, fish waste is high on ammonia, which can be detrimental to your shrimp’s health.

Either way, you should never entirely rely on a ghost shrimp to clean up the tank. Ensure there’s a proper filtration system in place to eliminate the gunk and waste that accumulates in the tank. In addition to that, conduct frequent water changes and clean the tank regularly.