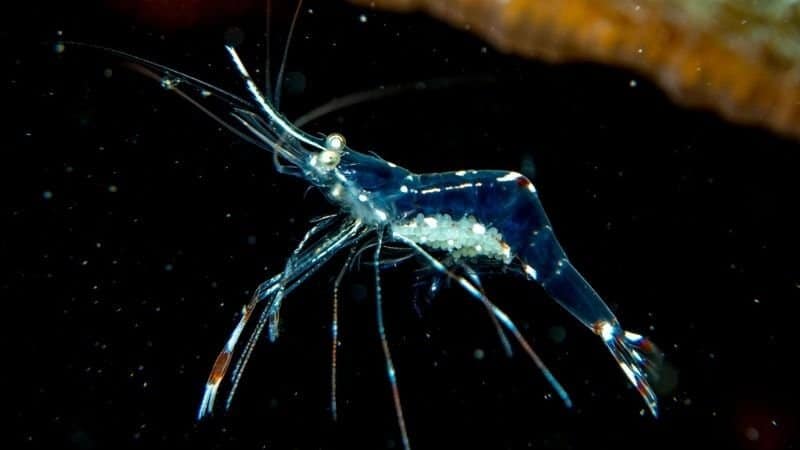 With see-through and symmetrical bodies, ghost shrimps make fascinating creatures. However, they’re also incredibly tiny and fragile—requiring delicate care. So, in this blog, we’ll explore – do ghost shrimp molt or not.

Molting is a hormonal process. Ghost shrimps have to get out of the old exoskeleton and grow a new, bigger one from scratch to grow.

The exoskeleton protects the ghost shrimp from different external factors and hinders the growth—forcing the shrimp to molt. It is also often referred to as a shell or cuticle. It is composed of chitin, protein, fat, and calcium.

And in the wild, the molting period often synchronizes among the breeding populations of the shrimp. However, factors like stress and the external environment can sometimes interfere with their molting processes.

Now that you know do ghost shrimp molt or not, let’s look at other pieces of information on molting that you should know.

How Many Times Do Ghost Shrimps Molt?

A healthy, adult ghost shrimp will molt every 3 to 4 weeks, while the younger ones will molt once every 1 or 2 weeks. It’s more frequent in the baby ghost shrimps because they grow at a rapid rate.

Depending on how the ghost shrimp are cared for, they can live just for a few weeks or survive a year. And they will continue to molt as long as they live.

While researching the article, I came across an owner who shared that her ghost shrimps molted 4 times in 7 weeks. It’s probably because the shrimp is in the juvenile stage.

So, don’t get surprised if you find several transparent shells lying around in the tank.

And don’t forget that there’s a direct correlation between the amount of food the shrimp is eating and the number of times it molts.

How Long Do Ghost Shrimps Hide After Molting?

A ghost shrimp will hide for about 48-72 hours (2-3 days) after molting. After shedding the shell, a ghost shrimp becomes very vulnerable and waits until the shell hardens up before coming out from the hiding place.

Ghost shrimps instinctually hide when and after molting so they can evade being preyed upon by predators. Thus, if you want to establish a thriving colony of these creatures in your tank, always create plenty of hiding spaces within the tank. This way, they will feel safe, secure, and minimally stressed.

What Are The Stages of Molting in Ghost Shrimps?

A ghost shrimp’s growth pattern is not similar to other water creatures like fish that grow continuously. Instead, ghost shrimps grow stepwise in successive stages. There are three stages, known as post-molt, inter-molt, and pre-molt.

The recovery from the previous molt characterizes the post-molt stage in ghost shrimps. To extend and merge the new cuticle and adapt to the new size, the shrimp will absorb a large volume of water during this period.

The appetite decreases significantly at this time.

In this stationary phase, the shrimp’s cuticles become functional. Likewise, the growth is continuous, and appetite increases.

Since ghost shrimps need a lot of nutrients during this period, their appetite increases veraciously.

The pre-molt stage means the shrimp is preparing to eliminate the old cuticle and grow a new one. The appetite decreases swiftly. And once the shrimp molts, the new cuticle will become visible to our naked eyes in the next few days.

How to Induce Molting in Ghost Shrimps?

Reportedly, mass molting is possible in crustaceans like ghost shrimps by inducing stress. However, it’s not recommended as stress may cause a viral infection. However, you can regulate factors like calcium carbonate and phosphorus in the water to promote healthy and safe molting.

Here are a few tips to promote molting in shrimps:

How To Tell If a Ghost Shrimp is Molting?

There are a few ways to tell if a ghost shrimp is going to molt soon. For example, the most common signs are loss of appetite, frequent hiding, standing still for a long time, and rubbing itself with hind legs.

When the shrimp is getting ready to molt, it’s once enormous appetite will change drastically. This will continue even when they’ve molted, and the new shell grows. However, they get their appetite back once they reach the inter-molt stage.

Ghost shrimps will always look for a private and peaceful place to molt. It’s because they’re quite stressed and vulnerable at this point. So, if you see your ghost shrimp continually attempting to hide from the crowd, this could be because it’s preparing to molt.

Ghost shrimps are active and busy invertebrates that are always on the move to scrounge. However, if you see your ghost shrimp staying unusually still or rubbing itself with the hind legs, these are the telltale signs of molting.

Once, I saw my ghost shrimp rubbing itself with hind legs and found it quite assuming. So, I continued to look for a few minutes and suddenly saw the exoskeleton shoot off to the other side of the tank.

Can Ghost Shrimp Die From Molting?

Although molting happens every few weeks, it’s a relatively critical period in a ghost shrimp’s life. Things can go wrong and even kill the shrimp. Molting will make your shrimp prone to diseases like White Spot Syndrome Virus (WSS), osmotic shock, and the infamous white ring of death.

A freshly molted shrimp grows a new shell by taking in a generous amount of water, making them more vulnerable to osmotic shock. Let’s suppose your ghost shrimp is absorbing hard water, and you conduct a water change in between. Now, if the new water is relatively softer, it will push its way into harder water that’s already been absorbed by the shrimp’s body.

This will cause the shell to expand to a dangerous level, which can have life-threatening impacts.

This particular disease/condition is as dramatic as it sounds. It is one of the most common and recognizable molting problems, characterized by a solid white/clear line wrapping around the shrimp’s body right where the head separates from the body.

This condition occurs when the old shell breaks all around the body instead of just the top—exposing the clear/white body parts. It leaves the ghost shrimp with two disconnected exoskeletons, making it hard to bend and jump out.

And because of getting stuck in the molt, the ghost shrimp may become quickly stressed and die within a few days.

Sometimes, you may see a ghost shrimp lying on their side, either motionless or continuously twitching. Sadly, this could mean that the shrimp is trying to get rid of the shell but is stuck. Usually, it’s because the shell has broken in the wrong places, and now the shrimp can’t escape from the old skeleton.

Some owners have reported that they’ve held the part of the old shell with tweezers to aid the process. However, ghost shrimps are extremely fragile, and exercise with utmost caution.

Sadly, as a shrimp-keeper, it’s inevitable to experience a few bad molts from time to time. However, besides breaking down of the shell in the wrong places, molting complications can result from bad water parameters and inadequate diet.

If the water temperature isn’t optimized to suit a ghost shrimp’s needs, it’ll cause frequent molting accidents. You should always check and ensure that General Hardness (GH) and Carbonate Hardness (KH) levels are on par with a shrimp’s need.

A lesser-known but equally responsible factor behind molting complications is diet. A ghost shrimp’s diet should always contain calcium and protein-rich food that facilitate molting and encourages new shell growth.

Is My Ghost Shrimp Molting or Dead?

Molting and death look very different in ghost shrimps but can confuse new owners. For starters, the color of the shell is the main differentiator. A dead ghost shrimp’s shell turns pink, while the grown out exoskeleton is transparent or whitish.

Molting is also a fairly quick process. Your shrimp won’t sit at the bottom in agony for hours on end to molt. So, if you see a motionless and pinkish shrimp, it’s probably a dead one.

Should I Keep or Throw the Ghost Shrimp Exoskeleton?

A ghost shrimp’s skeleton is nutrient dense and offers a lot of benefits. Although they don’t make an eye-pleasing sight, don’t throw them away. The shells will break down within a few days and disperse valuable nutrients like calcium, protein, and fat into the water column.

Do Ghost Shrimps Eat Their Shells?

Yes, a ghost shrimp will forage on the shell—taking in beneficial nutrients along the way. This is vital for them, as they will require a lot of energy to develop the new shell. And not just ghost shrimp, your tank’s other residents will love to have a bite or two as well.

What Happens After Ghost Shrimps Molt?

Well, besides growing a new shell, the breeding phenomenon also begins in the tank after molting. When a female ghost shrimp molts, she’ll release pheromones into the water, which entices sexually mature males to mate with her.

The male shrimps will do laps to find the freshly molted, hiding female. And once they mate, the eggs will move from the female’s saddle to down underneath her body, where she’ll carry them until they’re ready to hatch.

Conclusion on Do Ghost Shrimp Molt

Yes, ghost shrimps molt throughout their life as most crustaceans do. An adult ghost shrimp molts once every 3 to 4 weeks, while a juvenile shrimp will change shells every 1 or 2 weeks.

There are three stages of molting: post-molt, inter-molt, and pre-molt, which will continue to take place as long as the ghost shrimp lives.

However, the molting process isn’t always smooth—it can be laden with quite a few complications like a stuck shrimp, white ring of death, and osmotic shock.

There’s not much you can do once these conditions/diseases kick in. But maintaining the tank’s water parameters and feeding a nutritious diet goes a long way in eliminating molting-related complications in ghost shrimps.