Do Glofish Eat Each Other? Real Answers! 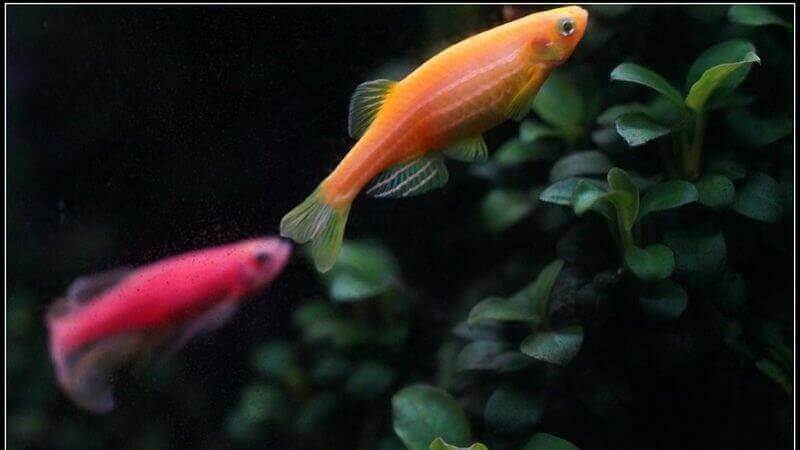 Glofish apparently account for 10% of all aquarium fish sales. But surprisingly, information available on raising them correctly is sparse. Even worse, whatever little guidance is there, they all seem to generalize different glofish species into one. And when it comes to queries like ‘do glofish eat each other?’ wrong or little information can be downright lethal.

Do Glofish Eat Each Other?

There are five different glofish species. And luckily, none of them have an appetite for each other. Although glofish sharks, bettas, and barbs are aggressive fish, they still don’t eat each other or any other fish. And glofish danios and tetras are petite fish that can barely fit any other fish into their mouths.

However, if there’s a dead fish in the tank, your glofish will definitely take a few bites. Who’d miss out on a fresh meal?

Before researching for this article, I thought that glofish bettas and sharks might eat each other or other smaller fish. After all, both these species are known for their incredible intolerance towards other fish.

And since I didn’t find any information on glofish sharks and bettas practicing cannibalism, I looked into the tendencies of their original species. And I was relieved to know that neither the OG bettas nor rainbow sharks eat other fish.

I have collected a few answers from hobbyists that I found reassuring. I hope you find them helpful too.

“I keep a rainbow shark in my 55-gallon, and although he’s territorial about one cave area, he’s never eaten anything but what I feed him.”

“I have a rainbow shark. He gets territorial and aggressive but has never eaten anything but what I put in for food. But it likes eating live plants. They really love vegetation.”

“Have you looked at how small a betta’s mouth is? The fish would have to be a small fry-sized in order to fit.”

“There’s no way a female betta can eat a neon unless it was smashed up.”

Are Glofish Aggressive? Why Are They Fighting?

Why Is My Glofish Swimming Sideways? 3 Reasons Why!

What Temperature Do Glofish Need? Do They Need A Heater?

Why Are My Glofish Attacking Each Other?

Although glofish don’t eat each other whole and alive, they are often involved in duels and brawls. The wrong school size, lack of resources and space, a struggle for dominance, and wrong water parameters are some reasons behind aggression in glofish.

Let’s have a detailed look at these reasons below.

The School Size Is Too Small

Glofish barbs, danios, and barbs are schooling/shoaling fish. They need to live in a community to thrive and feel comfortable. They’re the kind of fish that find safety in numbers.

In the wild, their original species school/shoal in thousands of numbers. Therefore, you should at least aim to keep 6 of them together in captivity.

When together, they play, chase, and playfully nip each other.

However, if you keep too few of them, they will become stressed and agitated. As a result, they will turn on each other. They will resort to violent biting and pushing around.

Also, don’t confuse glofish sharks and bettas for social fish. These fish are as antisocial and aloof as they come. They’d rather have the tank to themselves.

This pointer applies just to glofish barbs, danios, and tetras.

Lack Of Space And Resources

Big or small, all fish love to claim their tiny territories. That’s just how their brains work. Some will claim little corners, while others go for decorations like rocks and caves. This is especially true for loner fish like glofish bettas and sharks.

So, if there’s not enough space in the tank to claim and go about, it will definitely irk your glofish, whether it’s a 6-inch-long shark or barely an inch-long tetra.

The same applies to resources. As implausible as it may sound, aquarium fish do have a complex social hierarchy in the place that also determines their pecking order.

If the resources are scarce, there will definitely be a fight for who’s gonna eat what and how much. As you can guess, big and mean fish will take away the lion’s share, potentially starving your subdued fish.

As cliche as it sounds, all fish have unique personalities. The species they belong to determines their characters for most parts. Some fish, like glofish sharks and bettas, are naturally more assertive and ‘powerful’ than glofish danios, barbs, and tetras.

And the dominant fish will often chase and push around smaller fish.

These dominant fish won’t outright eat the weaklings but will bully them relentlessly.

Wouldn’t you be annoyed and angered if you were in the wrong environment? The same can be said for fish. If the water is polluted and inhospitable, glofish will become stressed and agitated. And naturally, they will lash out at each other.

The water parameters should look like this at all times:

Keeping the water parameters correct and stable requires consistent effort. It’s not a one-time gig. Things like topping off water levels and removing uneaten food should be taken care of daily.

Likewise, tasks like testing water parameters, performing water changes, and siphoning the substrate should be carried out weekly.

So, they’re more forgiving of wrong water parameters than your average fish. However, let’s not make that an excuse for keeping them in shoddy environments.

How Did My Glofish Disappear From The Tank?

Glofish don’t eat each other. However, from what I have read on forums, all glofish owners have had at least one fish missing from the tank at some point. So, where can it possibly be gone?

The reasons behind glofish disappearing from the tank are hiding behavior, jumping, sickness, and death.

Some fish are shyer than others. For instance, shying away and hiding is expected behavior for glofish betta. This usually happens when the fish is being introduced to a new environment, stressed for some reason, or senses danger.

Shy and stressed fish will often wedge themselves under rocks, behind decors, within plant clumps, and even bury themselves into the substrate.

So, if you find your glofish missing, make sure to inspect every nook and cranny of the aquarium.

Another probable reason for a missing fish is that it jumped out of the aquarium. Sadly, the ending is always tragic when a fish jumps out of the tank.

Unless you find the fish right after it has jumped out and put it back into the water immediately, the fish will most likely suffocate and dry.

So, if you find your fish missing and it’s nowhere to be seen inside the tank, quickly check your surroundings. Check behind the tank, inside the cabinet, and the floor.

The fish will wriggle and hop around to find water until its last breath. So, it can often be found surprisingly far from the tank.

A sick glofish will naturally appear reclusive and hide. Once again, check beneath the rocks, behind decors, within plant clumps, and under the substrate.

Sometimes, the sick fish gets so weak that it gets sucked into the filter intake. If that’s the case, the ending is grim.

Although glofish don’t eat each other, they don’t mind feasting on their late friends. It’s just how nature works. They’re just jumping at the chance to have a fresh meal.

If you’re late to know about the dead fish, the entire body may be consumed with not even a single trace.

Final Words: Do Glofish Eat Each Other?

No, glofish don’t eat each other. As aggressive as some of them are, they still don’t have the knack to swallow their tankmates whole and alive.

However, opportunist glofish will not mind taking a bite or two out of a dead tankmate like any other fish.