Do Goldfish Need An Air Pump? | The Real Truth 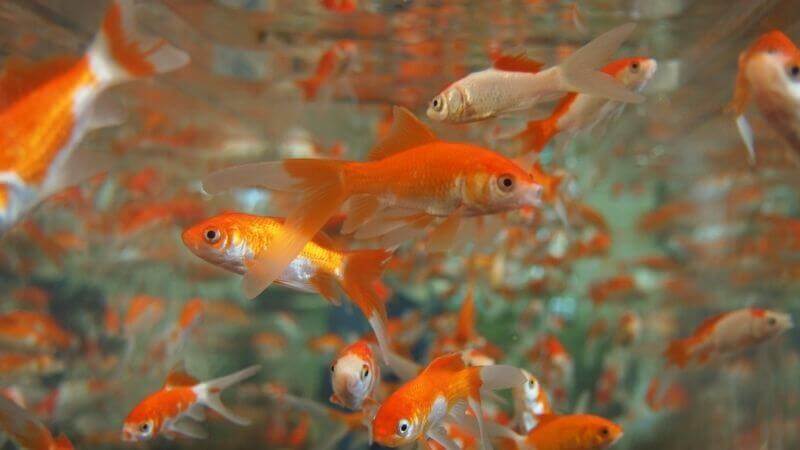 Do goldfish need an air pump? You’ll find all kinds of answers on the internet.

There are people preaching it’s absolutely important for a goldfish’s survival and cleverly recommending one too many air pumps available on Amazon.

Then there are naysayers who argue that goldfish have been bred for a thousand years at least without an air pump, and they don’t need one now.

But if you ask me, my answer would be ‘depends.’ Do goldfish need an air pump? It depends – depends on several factors like the tank’s size, filter in use, population, and the fish’s ‘origin.’

Do Goldfish Need An Air Pump?

If the tank is big enough and is equipped with a sturdy filtration system that can produce enough surface disturbance, an air pump might not be necessary. But if the tank is small and densely populated and you’re worried the fish might not get enough oxygen, get an air pump.

The thing is that in most cases, an air pump in a goldfish tank might not be necessary.

That being said, there’s no harm in adding an air pump either if it helps you sleep better at night. There are many reliable but inexpensive air pump designs available in the market.

When I first got a pair of goldfish, I certainly didn’t add an air pump. Also, I hate to admit it, but the fish lived in a small bowl with no filtration and heating mechanism whatsoever.

Needless to say, the goldfish breathed their last breath very soon. But hey, cut me some slack – I was only ten then.

Anyway, cutting to the chase, I’ll explain a few ways to know if your goldfish really needs an air pump or not. Let’s go!

I’ve already made it clear that an air pump isn’t entirely indispensable. However, certain conditions demand an air pump, and there’s no alternative. For example, if the tank is crammed and small, the filter doesn’t create enough surface movement, and the water is warm, your goldfish desperately needs an air pump.

Let’s have a look at these scenarios in detail.

The simplest way to check if the filter is creating strong surface movement or not is to observe the water. If the water appears calm and still, you might need an air pump to get things going. On the other hand, if you see strong currents and bubbles forming, it means the filter suffices.

By the way, if the water is stagnant, it’s a good time to reflect on the tank’s overall filtration mechanism. Any humdrum filter won’t do. Goldfish grow big and are pretty messy – you’d need a filter strong enough to remove the gunk daily.

The Water Temperature Is Higher

Goldfish are coldwater fish – however, the fancy variety reportedly likes their water on the warmer side. The temperature should fall somewhere between 60-70 degrees F.

So, if the temperature is closer to 70 degrees, you might want to get an air pump because warm water holds less oxygen. Cooler the water, the more oxygen it holds.

Also, investing in an air pump would be a good idea if the water gets pretty warm in the summer.

The Tank Is Small

Goldfish are often subjected to nano tanks – or even worse, fish bowls. However, the minimum recommended tank size for one goldfish is 20 gallons. These fish can grow quite big – up to 2 feet long.

As a result, the oxygen dissolved in water is relatively low. So, coming to the point, the smaller the tank is, the higher the odds that it needs an air pump.

The Tank Is Overpopulated

As discussed above, a single goldfish’s minimum recommended tank size is 20 gallons. But this rule is seldom seen in practice.

Goldfish are often crammed together in small tanks for whatever reasons. But when the tank is overcrowded, the tank’s oxygen levels deplete for obvious reasons.

And you know what happens when the tank’s oxygen level depletes.

So, if you think you have kept a higher number of goldfish together in the tank than you should have, it’s high time you get an air pump to ensure enough oxygenation.

When a goldfish is suffocating, it will rise to the surface in an effort to breathe in some air. Besides that, a fish deprived of oxygen will also become lethargic and have labored breathing. Also, the gills will move faster than usual.

Goldfish are curious and active swimmers. In the right environment, they’re constantly swimming and exploring. However, if you notice the fish resting more than swimming, floating motionlessly, or sinking to the bottom, it’s an obvious sign that it is feeling lethargic.

It’s only natural to feel lethargic when one doesn’t have enough oxygen circulating inside the body.

Having said that, there could be other underlying reasons behind an inactive goldfish. For example, it could be that the water is too cold or they’re sick and stressed.

Staying At Bottom Or Top

Cold water holds more oxygen than warm water. Therefore, if there’s not enough oxygen, the fish will hang around the bottom as this area is more oxygenated than the top.

On the contrary, the fish may rise to the surface in an attempt to breathe in oxygen from the air.

You may notice that the fish is having a hard time breathing. Rapid gill movement is a sign that the goldfish is working extra hard to inhale as much oxygen as possible.

However, panting could also be a sign of other health conditions, especially parasites. So, make sure you observe the fish carefully and make necessary changes if you catch it panting.

Hovering Around The Pump Or Filter

When suffocated, your goldfish will hover above the filter or an air pump (if there’s one already), trying to catch bubbles as they rise.

It is another crucial sign that the fish isn’t getting enough oxygen. You might want to check the equipment setting or upgrade the equipment altogether.

As you see, adding an air pump can impart quite crucial benefits to your tank’s inhabitants. So, although it may not be of utmost importance, lack of it can sometimes lead to life-and-death situations.

Therefore, let me make a recommendation.

The Best Air Pump For Goldfish

Well, Tetra is a brand we can trust. But, if you’re still skeptical, you might want to go through over 30 thousand rave reviews the product enjoys on Amazon alone!

I can vouch that this is the quietest air pump on the market – at least in my experience.

And if you have tanks bigger than 100 gallons, you can get your hands on one from the Tetra Whisper AP series. This line caters to tanks up to 300 gallons.

If you’re looking for a bang-for-the-buck product, Hydrofarm sells an inexpensive line of powerful air pumps with adjustable flow rates.

They come in 4 models:

What Is An Air Pump? How Does It Work?

An air pump is usually an electrical box plugged into an outlet to create bubbles through the tank. Air pumps have 2 main functions – ensuring the tank maintains an adequate concentration of oxygen and forcing water through a filter.

Air pumps are connected to the aquarium-grade airline tubing, which is then kept inside the tank and connected to an air stone.

When the air pump is turned on, it pumps air at very high speeds through the airline tubing and tiny, porous holes in the air stone. As a result, bubbles will form and oxygenate the surface.

You should never dry run an air pump as this will quickly burn the motor, and the air pump will no longer work.

Here’s a look at some most frequently asked questions on the subject.

Do Goldfish Need A Filter And An Air Pump?

A filter is mandatory – there’s no alternative. Goldfish make a big mess, and you must install a sturdy filtration system to eliminate the gunk daily. However, an air pump isn’t absolutely necessary as long as you have other provisions to oxygenate the tank.

Goldfish are diurnal creatures that stay active during the day and rest at night. Thus, they require light to mimic the daylight they would receive in the wild.

How Long Can Goldfish Survive Without An Air Pump?

If the tank is well oxygenated through other provisions, goldfish can survive without an air pump for several years – they’d live for just as long as they’d have if there was an air pump.

However, if the tank is too small, there are too many inhabitants, and the water is warm and still, the tank’s oxygen level will fall steeply. In such cases, the goldfish may only survive for a few hours before suffocating to death.

Do Goldfish Need A Heater?

Although goldfish are coldwater fish, it’s best to err on the side of safety by providing a reliable heater. The ideal water temperature for goldfish ranges from 68-74 degrees Fahrenheit.

If you suspect the water temperature can fall below 68 degrees Fahrenheit in your area, you need to install a heater to maintain optimum temperature.

How Do I Give My Goldfish Oxygen Without A Pump?

A powerful filter that can cause surface agitation, live plants, waterfall filters, and spray bars can increase the water’s oxygenation levels without needing an air pump.

To sum up, a goldfish may or may not need an air pump, depending on the tank’s environment. If the tank is well-oxygenated at all times, even without an air pump, you don’t need to buy one.

However, if the tank is too small or crammed and water is on the warmer side, the tank’s oxygen levels will likely deplete. In this case, it’s better to be safe than sorry and get an air pump. They come cheap and offer unique benefits, from oxygenating the tank to enhancing the aesthetics.