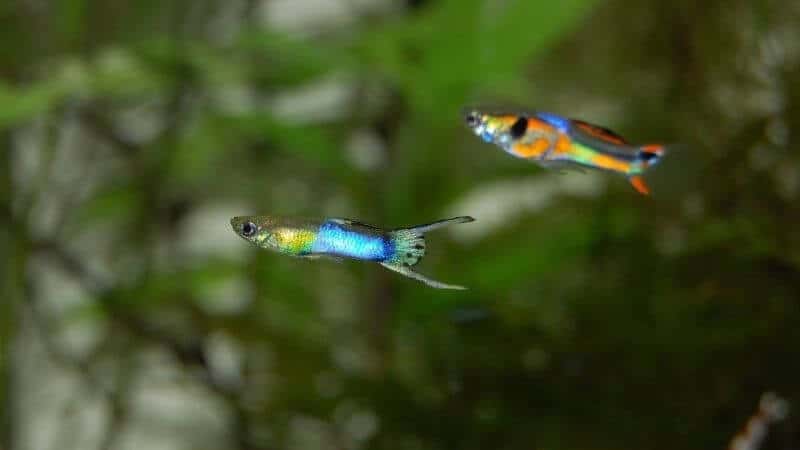 Who would have thought the unassuming, social guppies are, in fact, widely linked with infanticide and cannibalism. Surprising? It’s not uncommon to hear tales of fry disappearing overnight with only leftover eyeballs floating in the water. Or instances where a guppy bites the tail off of a fellow tank mate. So, how much truth is in these gory accusations? Do guppies eat each other? Let’s find out.

Do Guppies Eat Each Other? Here’s What You Need to Know.

No, guppies don’t eat each other in most instances. In reality, they’re relatively amicable creatures. However, we cannot rule out the possibility altogether.

If the tank is overcrowded and guppies are starving, they have no option other than resorting to cannibalism.

Now let’s look at other queries related to the above question. Really, there’s a lot more to “do guppies eat other?” than what we just addressed.

Do Guppies Eat Their Fry?

Guppies are beautiful and low-maintenance. We can’t stress that enough.

But things can get murky real quick if you don’t pay attention during the breeding stage.

Guppies are known to display a tendency called filial cannibalism—the consumption of one’s own offspring. So, it’s always better to keep your guppy fry in a separate tank than their parents or other adult guppies.

Now, as puzzling as this phenomenon is, the reasons are even stranger.

Why Do Guppies Eat Their Fry?

Before we jump on the reasons, let’s clarify that this practice isn’t only exclusive to guppies. Many other fish and animal species are known to exhibit this trait as well.

Here are a few reasons why guppies eat their own fry:

Some scientists believe that the act of eating own offspring is caused by several stress factors in guppies. This happens so that the fish can enhance its own self-preservation instinct.

However, it’s not a very convincing reason. Guppies are known to eat their fry even when they aren’t kept in stressful conditions.

Another reason researchers explored is that parent guppies weed out their genetically weak offspring to bolster their species’ survivability.

It’s believed that the targeted fry is often genetically malformed or lacking of important survival characteristics.

Some scientific studies have also concluded that guppies practice filial cannibalism to ensure food and energy source when other resources aren’t available.

Especially in female guppies, this behavior is practiced to replenish fat storage.

Now this reason may seem farfetched to many. But several scientific discourses have pointed towards this theory as well.

We all know guppies reproduce prolifically, and overpopulation is quite common. Some researchers believe that guppies eat their own little to curb the problem of overpopulation.

More so, in times of scarcity, guppies tend to slow their growth by making each fry less of a burden.

So now it’s clear that guppies don’t munch on their babies for sheer fun or to satiate their or hunger.

There are complex underlying conditions and centuries of evolutionary traits that have shaped this occurrence.

Now let’s dig deeper some more to know about guppies and cannibalism.

Yes, they do. Guppies eat dead guppies and other dead fish.

Due to their cannibalism streak, guppies will immediately feast on their former friend. However, it’s definitely not a habit you want to foster in your tank.

The dead body will rot quickly and contaminate the water. So, make sure to remove it as soon as possible and check the ammonia and nitrite levels in the tank to make sure everything is alright.

Do Guppies Bite Each Other?

Guppies have a tendency to bully and bite each other and other tank mates.

While they’re social and docile most of the time, they can be quite territorial. It’s more common if there are multiple male guppies in the tank or if you add new members to the tank at a later point.

Do Guppy Fry Eat Each Other?

Thankfully, no. Guppies don’t display cannibalistic behavior at the early stages of their lives.

They’ll eat whatever their parents are eating—brine shrimp, bloodworms, flakes, among other things.

However, there’s a catch. We can’t rule out the possibility of an older fry bullying and nipping at smaller ones.

Nonetheless, it’s quite rare – don’t worry too much about it.

The circle of life.

Up until now, we’ve talked about how guppies can bully each other and other fish to death if they will.

But there can be instances when guppies are at the receiving end.

For example, most carnivorous fish that devour live food will eat guppies.

Oscars love them. Even angelfish will eat smaller guppies.

An adult guppy eating a fellow friend or a dead one isn’t preventable. In most cases, it’s simply not something you can control.

However, you can stop them from eating the little fry.

How to Stop Guppy from Eating Their Fry?

Once your female guppies give birth, immediately start preparations for a separate tank.

Set it up using only pure water that doesn’t have any hardiness to it.

Ensure that there’s a heater, an air pump (if needed), and all other amenities to create a suitable environment for the fry. If you’re using a filter, make sure that there’s a sponge filter or cover it with a cloth to prevent them from getting sucked in.

If you want to school train your fry, you can go for the R2 Fish School Complete Fish Kit.

Having something like this will keep your fry entertained throughout the day. I’m suggesting this particular kit from R2 Solutions as it’s quite comprehensive and comes with many tools to train your guppy fry.

Using a soft, small net, transfer the guppy fry into the new tank. Don’t try it with your hands. That’ll only add to their stress.

Add Plants in the Tank

If a separate aquarium is not possible, add some live plants in the tank.

That will offer a good hideout for the fry.

My personal choice would be duckweed.

The quickly sprouting leaves of this floating plant will offer plenty of secret spots within the tank for your fry.

On top of that, it’ll also remove nitrate and prevent algae growth—bonus points.

Once again, if a separate aquarium is not feasible, try using a breeding box. It’s the cheapest yet safest option available to you.

It’s a small plastic box that’s used to acclimatize or isolate fish. Warm, oxygenated water will continuously flow into the box with the help of an air pump.

The Fish Breeding Box by Tfwadmx seems like the right choice because it comes with three individual compartments for the fry. And if you’d like to use it as a large hatchery box, it’s quite easy to remove the partitions as well.

Whether or not do guppies eat each other is far more contextual and complicated than one might think.

It’s not uncommon for guppies to display cannibalistic tendencies, whether it’s eating their own fry, a dead guppy, or fighting each other to death.

While this behavior is mostly an evolutionary trait, factors like excessive stress and lack of adequate resources also play a part.

Addressing the reasons behind stress and hunger factors, in addition to applying proper safety measures for fry, will help you protect your guppies from each other.