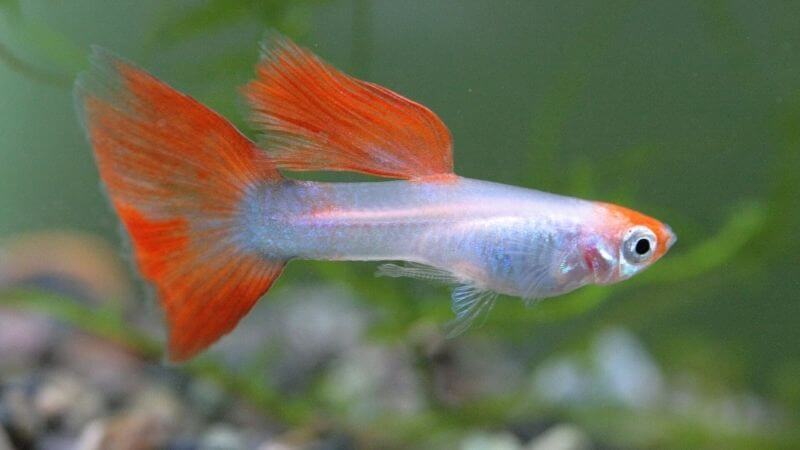 Guppies are one interesting species.

They swim in schools but are territorial.

They’re fun-loving and social but can tear one another’s fins off.

To us, guppies may seem like colorful, little fish with no worry in the world. But several scientific studies have shown that they’re complex creatures with sophisticated mental processes that we can’t even begin to comprehend. And that brings me to our main question today.

Do Male Guppies Fight? Here’s What You Need to Know.

Yes. Male guppies fight with each other. Actually, this predisposition is not just limited to guppies.

Males from other popular aquarium fish species like goldfish, neon tetras, and bettas commonly fight with each other as well.

Here are a few reasons why male guppies fight with each other:

Sometimes, the fighting stems from the power struggle.

The males always try to impose their dominance over others, which sometimes leads to bullying and fighting. The conflict may subside once the pecking order is established in the tank.

If you notice this type of behavior in guppies, always make sure to examine for injuries like wounded tails and fins.

Not Enough Female Guppies in Tank

Guppies are known to be highly promiscuous fish. A 1994 study by Magurran and Seghers even reported that the males can perform up to 1 mating attempt per minute. Insane, right?

Now imagine what would happen if you put all male guppies together without a female in sight. The males will start becoming stressed and eventually hostile towards each other.

Not Enough Space in Tank

The rule of thumb when it comes to guppies is at least 2 gallons per fish.

However, guppies can grow up to 2.5 to 3 inches often, which means they’ll need more than just 2 gallons.

Suppose there’s not enough space in the tank. In that case, guppies who are territorial by nature will resort to bullying and violence to establish their zone.

How to Stop Male Guppies from Fighting?

From the points stated above, you must have guessed how to stop male guppies from fighting.

Here are a few proven techniques:

Get a Bigger Tank

A bigger tank means enough space for everyone to swim around and show off them effervescent colors. This will help to reduce territorial aggression quite common among guppies.

The general rule is 2 gallons of water for one guppy. But they generally end up needing more. So, do the math and make sure you have the right tank size.

Guppies love hanging out at the top. So, you can add some live, floating plants that will give them a place to retreat from all the bickering.

My personal favorite is duckweed.

In addition to its uniquely shaped leaves that offer a right hiding place, it also removes nitrate and prevents algae growth.

Other attractive floating plants that you can add to your guppy tank are water lettuce, java moss, bladderwort, and moss balls.

This point may seem unusual, but hear me out first.

The smaller the school of guppies, the higher the aggression level will be. With small groups, there are more common occurrences of dominating and bullying.

If you add more males, the aggression will spread around. The main dominant fish will pick on other males, and hence, there will be fewer targets.

However, this is one tricky solution. So keep a close eye on them.

Adding more females in the tank will lower the mating competition for male guppies.

The males’ time will also be spent on wooing females. Thus, a lesser time slot for fighting.

This means, overall, less stress for both parties.

Now the last two points bring us to the two other important queries.

Can I Put Only Male Guppies in Tank?

Not really. Keeping only male guppies in one tank is not the right thing to do. That’ll just lead to an excess of power struggle, sexual frustration, and territorial riots.

We’ve seen many people do that for aesthetic purposes, thanks to male guppies’ vibrant looks.

However, more often than not, it ends up with wounded, bruised, and possibly dead guppies.

What is The Right Male to Female Ratio for Guppies?

Once again, the rule of thumb would be to keep two female guppies for one male.

We’ve already established that both male and female guppies are highly sexual creatures.

The males harass the female by chasing them and showing off the colorful fins in an attempt to mate. That’s just how it’s in the sea world.

So, it’s always essential to have more female guppies than males. That way, the attention will be divided, and there’ll be less harassment towards females.

Having comparatively fewer male guppies will also reduce the problems of overproduction and overpopulation. This is a win-win situation for everyone.

Can Male Guppies Kill Each Other?

Yes. If the situation goes out of hand, death is not a farfetched scenario.

A guppy will rarely kill a fellow male in a single showdown. In reality, it’s a result of a series of repeated fights and sustained injuries.

The guppy may die of death-causing injuries or secondary infections inflicted by it. If the injuries are not treated on time, opportunistic parasites will quickly get into the bloodstream and cause irreversible fatalities.

This usually happens if there’s one particular guppy who is bullied by a group of other guppies.

What to Do With Bullied Guppies?

Before we address this, let’s see what we can do with bully guppies.

If there’s a guppy who’s causing all the problems in the tank, you can put him in a separate tank, alone, for some time, and try to acclimatize back later.

As for the bullied ones, look for signs of injuries first.

If they are wounded, they will need immediate treatment.

Transfer the injured guppies to a separate tank and apply the necessary medications.

Once it is healed, you can try to restore it in the previous tank. However, if the bully still comes after the poor guy, you’ll just have to get rid of the bully, sadly.

Before we end this, let’s talk about something interesting. I’m sure this has crossed your mind before.

Do Female Guppies Fight With Each Other?

Although it’s not quite common as male guppies fighting, an all-female fight often breaks out in the tank.

Why Do Female Guppies Fight Each Other?

Here are a few reasons:

Female guppies can be quite picky when picking a partner. They’re often on the receiving end of harassment when a male guppy attempts to mate.

As a result, she will spend a lot of energy trying to fend off unwanted partners.

Eventually, this adds to her stress. And this may affect her dynamic with other fish in the group—often resulting in fights.

Female guppies have their own pecking order, too. If a smaller, docile fish gets impregnated, the stronger ones will pick on her.

To address this issue, you can once again put the bully in a separate tank and see if it works.

How to Stop Female Guppies from Fighting?

There’s no one sure formula to address this formula.

But usually, what works like a charm is removing male guppies from the tank. That way, nobody is getting stressed about mating and no pregnancies.

Do male guppies fight? Of course, they do. Females too.

Like we have discussed above, there can be different underlying reasons behind it. From territorial aggression to mating struggle, several factors point towards this destructive behavior.

However, don’t worry. It’s seldom unfixable. There are several ways to work around this problem. For instance, switching to a bigger tank will help with territorial aggression. Likewise, increasing the ratio of females in the tank reduces the mating tension.

Just don’t forget that male fish fighting with each other is not uncommon. This behavior is found in most other fish species, too—it’s just they’re wired like that.