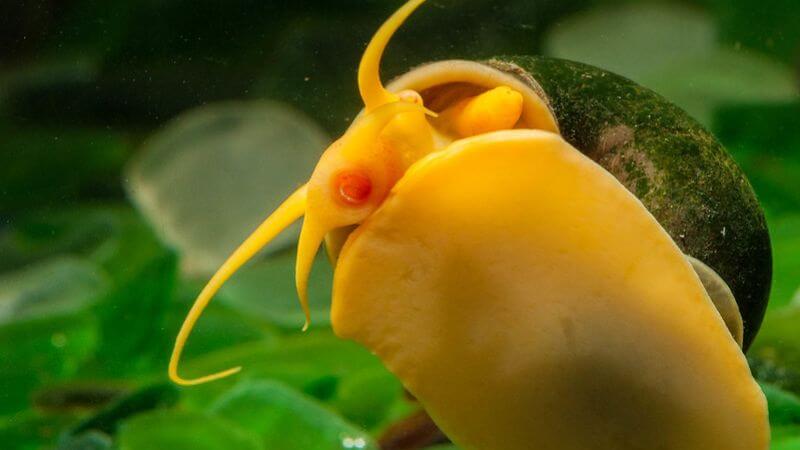 Many first-time mystery snail keepers often email me, worrying about their mystery snails sitting idle for weeks. Despite attending to every need – maintaining water parameters, acclimatizing, and serving the storekeeper’s self-proclaimed “snails-love-it food,” – they are still unable to make their pals active.

And when this happens, myriads of things can pop into one’s mind. The most popular one is “Perhaps, it is hibernating.” And it won’t be long before the thought of losing your snail creeps in slowly.

So, in this episode of snails, we will discuss if mystery snails hibernate, along with related queries like their sleep cycle, aestivation, and so forth.

Mystery snails in the wild hibernate when there’s a lack of food or the temperature drops too low. However, captive ones with all the creature comforts like correct water parameters, nutritious diet, and compatible tankmates will not usually go into hibernation.

In general, if the mercury drops too low, they can become comatose.

At the start of hibernation, mystery snails cease eating, and their metabolism level drops to an all-time low – just 5% of their regular metabolism level. They will then release mucus to seal their shell aperture to keep their bodies hydrated. This helps them create an air cushion to shield against the cold.

Furthermore, they can mix their blood with superfluous fluid inside their bodies, making the blood more cold-resistant. This prevents their blood from freezing. Impressive!

Research shows that mystery snails can only withstand cold up to 19.4 to 17.6 degrees Fahrenheit (-7 to -8 degrees Celsius).

And even if they survive the chilling temperature, their vital organ – the mantle – suffers a heavy blow from the cold, affecting their quality of life.

Although it is somewhat controversial, hobbyists often burden their snails by putting them up for hibernation. They do this by lowering the water temperature, feeding less food, and diming the tank lights.

Snails in the wild have to meticulously prepare their bodies before hibernating. Things like temperature do not change drastically in natural settings. So, they have adequate time to prepare for hibernation.

And even then, some don’t wake up afterward.

But some snail keepers are unaware of all these mandates and pressure their snails to go into hibernation. And things go south when this happens.

Let me tell you what happens if a snail is forced to hibernate.

Keeping snails in a colder environment will shock their bodies, putting osmotic stress on cells. Unfortunately, this damage stops their bodies from producing enough glucose concentration in their kidney’s posterior chamber, disabling them from battling the cold shock.

Furthermore, they won’t be able to increase glycerol production and heat shock protein to prevent their vitals from freezing.

And when this happens, your snail will bite the dust.

How To Know If A Mystery Snail Is Hibernating?

Here are six signs to tell if your mystery snail is hibernating:

A sleeping snail will wake up when it is hungry and has to scavenge. But the one hibernating will remain idle even if you place food nearby.

So, serving a delicious treat to a hibernating snail won’t wake it up from its slumber.

The Shell Is Sealed With Mucus

Hibernating aquatic mystery snails produce slime to create an extra layer over the operculum to protect themselves from cold.

Mucus helps them reduce the water loss during the dormancy period, keeping their bodies hydrated.

Also, this extra layer of mucus prevents cold from seeping inside the shell.

So, if you notice a thick layer of mucus covering the operculum of your mystery snail, it is most likely hibernating.

Hibernating Snail Do Not Give Off Pungent Order

A snail corpse has a distinct odor. But a hibernating or live snail doesn’t is odorless. So, this is another way to check if your snail is in its deep slumber or dead.

Remember that an odorless snail is an alive snail.

However, if the idle snail starts to smell, it is likely decomposing. So take it out of the tank immediately.

Also, some snails do eat their own species if they find out that their pal is dead. Snails often gather around the dead snail when it starts decomposing.

This is another cue to distinguish between a hibernating snail and a dead one.

The Body Hasn’t Curled Up

A dead mystery snail’s body curls up after it dies. It shrinks and becomes smaller in size. But a hibernating one will remain the same size even after sleeping for 2 years (Yes, some of them sleep for that long).

Hibernating mystery snail will hide all of its body inside the shell. As I said, it will cover its operculum with mucus to avoid freezing.

A Hibernating Mystery Snail Sticks To Every Kind Of Surface

A live mystery snail will not stop producing slime even when it is in hibernation. The slime acts like glue, helping the snail attach its body to anything. This means that your mystery snail can hibernate in any position.

Next time you find your mystery snail hanging upside down and not moving for weeks, you need not worry because a dead snail won’t stick on anything.

It Won’t Wake Up Every Now And Then

An asleep mystery snail will wake up every few hours and start scavenging till it is tired and goes back to sleep. But a hibernating one won’t follow the same schedule.

It will not wake up until the environment gets warmer. So, if your mystery snail has been asleep for more than a month, it is hibernating.

Sleep Cycle Of A Mystery Snail

Even though many people keep mystery snails to get rid of algae, they aren’t the most effective snail for cleaning purposes. Instead, you will find them sleeping on the job for the most part.

Typically, mystery snails take nap bouts about seven times within 13 hours. And there are days when they won’t wake for 24 hours.

Here are some underlying reasons behind your mystery snail sitting duck in the tank:

No matter how tough these snails are, they need time to adapt to a newer setting. The water parameters of the new habitat will not be identical to that of the previous tank they lived in.

So, you have to be patient and maintain the optimum water condition.

Here are the preferred water parameters for mystery snails:

Active Only During The Night

Like most snails, your mystery snails could be dormant during the day but active only at night. This isn’t an uncommon thing to witness in a community tank.

With other tankmates active during the daytime, your snails might hesitate to come out during that period.

So, this could be why you always find your mystery snail not moving and hiding in just one spot.

Stress Can Be A Factor

Mystery snails are usually kept in a community tank. So, your little friend can get intimidated knowing there are other tankmates in their habitat.

Hence, it will bide its time and won’t move till it feels safe in the new surrounding.

If you notice other tank residents harassing your mystery snail, you might have to keep it in another tank.

Having said that, mystery snails are known to get over their fear of other tankmates quite soon. Some of them adapt more shortly than you think.

It might be hard to believe, but mystery snails in the wild aestivate. When the temperature rises, there’s a high chance of snails drying.

So, to escape the heat, mystery snails go into an aestivation state. Like with hibernation, they will lower their metabolism, using little to no energy.

And if you set the heater’s temperature to maximum, your mystery snails might resolve to aestivate.

But unlike in land snails, aestivation isn’t that common in aquatic snails like mystery snails.

The temperature of the water is different than on the land. So, water acts like a buffer. This is why mystery snails seldom need to aestivate. But they can still aestivate if the temperature is exceptionally high.

You must understand that hibernation is a last resort method for every creature to survive adversities. So, unless you fail to provide a suitable livelihood for your mystery snails, they will not hibernate.

Furthermore, mystery snails can hibernate as well as aestivate. However, not every prolonged period of inactivity can be termed hibernation.

There are times when snails sleep for weeks. But they eventually wake up.

This kind of sleep is known as torpor. It is a period where snails get lethargic and lower their metabolism to less than five percent.

And this is not only common in mystery snails but in all kinds of snails.