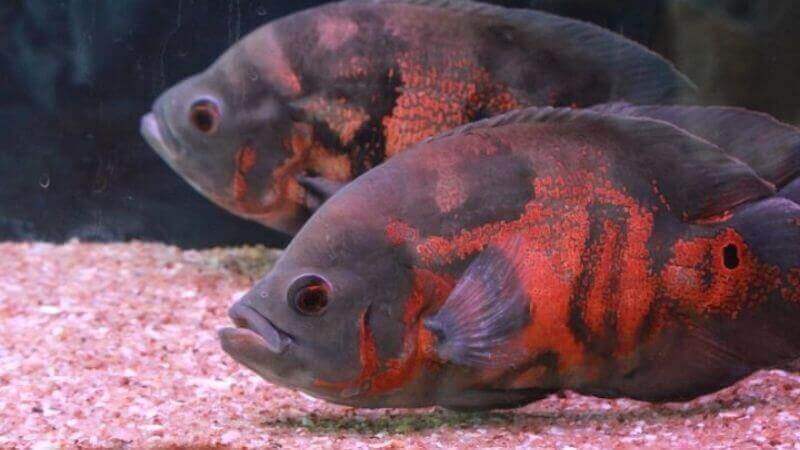 For aquarium fish, oscars grow pretty big. They apparently grow at the rate of one inch per month in the first year. And they’re pretty skilled hunters. So, you should tread carefully when choosing tankmates for these feisty fish. Do oscar fish eat other fish? If yes, should you feed them?

In this blog, I’ll answer all of that and some more.

Do Oscar Fish Eat Other Fish?

Yes, oscar fish eat other fish – both in the wild and in the tank. Oscars are avaricious eaters. On top of that, they have a terrible temper. So, if given a chance, oscars will consume any fish they can fit inside their mouth. Therefore, when choosing tank mates to go inside an oscar’s tank, only opt for fish that are almost as big as oscars and have an assertive personality.

What Do Oscars Eat In The Wild?

Oscars originally come from the tropical and subtropical corners of South America. Although omnivores, most oscars prefer a carnivore diet. They will eat meaty foods like small whole fish, crustaceans, insects, and insect larvae in the wild.

Unfortunately, there’s no conclusive study done yet on an oscar’s dietary pattern in the wild. But we can safely assume that live fish and insects comprise approximately 90% of their overall diet in the wild.

Although live fish and critters make up the central part of an oscar’s diet, they are also known to occasionally snack on fruits, nuts, and snails. However, they don’t get lucky every day – fruits and nuts are only consumed occasionally in certain seasons.

On some forums, authors reported that they’ve often seen oscars swimming near dead animals. Now, we’re not sure if oscars were feasting on the carcass or the small fish attracted by the carrion.

What Live Fish Can Oscars Eat?

Here’s a list of live feeder fish oscars can consume:

While researching for this blog, I came across hobbyists who exclusively fed their oscars live feeder fish. And while live fish should definitely have a permanent place on their menu, it should not ever be the only food offered to oscars.

There are quite a few caveats attached to live feeder fish. First and foremost, there’s a solid chance that the live fish that you’re about to give your oscar carries a potentially dangerous disease.

Unfortunately, most feeder fish, especially goldfish and guppies, are bred and raised in huge numbers by fish farmers under unhygienic conditions. Thus, the likelihood the feeder fish carries harmful pathogens is relatively high.

Thankfully, improvements in the farming style are evident over the last couple of years, owing to pressure from conscious consumers and activists alike.

The heightened understanding of breeding, transporting, and maintaining feeder fish has made them safer to consume than ever. That being said, I’d still advise against giving feeder fish a habit.

Why Shouldn’t You Give Oscars Feeder Fish?

Giving oscars feeder fish once in a while is alright, but don’t make it a habit:

Feeder fish are raised haphazardly in unhygienic conditions. On top of that, they’re not fed a nutritious diet. Instead, they are fed or injected with hormones, so they breed prolifically and grow rapidly.

Therefore, as you can guess, feeder fish have a significantly compromised immune system. As a result, they’re susceptible to a plethora of different diseases. And if your oscar consumes a diseased feeder fish, there’s no doubt that the parasite will latch on to your pet fish’s system.

While we cannot disregard that considerable improvements have been carried out in breeding and raising feeder fish, the stakes are still very high.

A seemingly far-fetched but still on-the-cards problem you can come across while giving live fish is your oscar choking on it. Especially if your oscar isn’t used to eating live fish often, the prey can get dislodged in the mouth, throat, or digestive system and prove fatal.

Reportedly, nature has shaped some fish in such a way that they get stuck in the throat as a defense mechanism.

You can take catfish as an example. Most of the fish from this species have sharp spines in their fins that erect when threatened. Several oscar fish have died untimely when hungrily trying to devour catfish – especially plecos.

Oscars are greedy eaters. So, they try to gobble up anything you offer them. However, if you make feeding them feeder fish a habit, they will soon acquire a taste for it.

And before you know, your oscar will deter dry food like flakes and pellets, as well as blanched veggies. I wouldn’t blame them – who’d chomp on dry and bland pellets when you can gnaw on some fresh flesh?

If they lose their appetite for ready-made food and vegetables, it will be tremendously challenging to coax them into eating these foods. So, you have to tread carefully from the start.

Before we conclude this section, here are a few tips from my side if you still want to go ahead and give feeder fish:

Besides live fish, here’s a list of live food you can give your oscars:

In the wild during the rainy season, when most fish are scattered across the flooded forests, oscars turn to insects, larvae, and small crustaceans to supplement their diet. Desperate times call for desperate measures.

Thus, it’s perfectly fine to supplement your oscar’s diet with live treats every once in a while. I often give my oscars mealworms and crickets that I buy from a local pet store.

Always be mindful of where the insects you’re offering are sourced from. There’s a chance that these insects have ingested pesticides, fertilizers, and other harmful chemicals.

So, if you come across a worm in your backyard and aren’t sure if it’s safe to give, just discard it. Even the slightest exposure to these chemicals can prove fatal for your oscars.

Thankfully, pet stores these days house a lot of options of farm-raised insects like waxworms, mealworms, and crickets. They come in prepared and frozen forms and are usually sold in small cans.

Your oscars can safely eat a whole of different insects but not these two: bloodworms and tubifex.

While bloodworms aren’t downright harmful to oscars, they’re often associated with bloating. So, you might want to skip this one.

Tubifex are those red worms that are often found in muddy puddles and rivers. And since they’re primarily sourced from polluted water sources, they usually carry deadly pathogens and parasites, which can be life-threatening if your oscars consume them.

How Often Should You Give Your Oscar Live Food?

You can give your oscars live food around twice or thrice a week. At least that’s what I do. Then, feed them pellets or flake food explicitly formulated for tropical fish the rest of the time.

You shouldn’t make giving live food a habit. Otherwise, both you and your fish will end up facing a lot of unpleasant repercussions.

3 Disadvantages For The Oscar

Vegetables, Fruits, And Nuts For Oscars

I always blanch and skin the peas before giving them, but you can also give them rinsed frozen peas. If it’s your fish’s first time trying this veggie, it may spit it out at first. But a couple of tries later, it will definitely acquire a taste for peas.

In certain seasons, oscars in the wild frequently snack on fruit nuts that have fallen from the nearby tropical trees. So, you can safely give them some shelled nuts in moderation.

I give mine 3 to 4 shelled nuts once every 2 weeks or so.

How To Feed Oscars Vegetables?

It’s crucial that you blanch the veggies first and cut them into small pieces before offering your oscar. Blanching the veggies won’t just make it softer and easier to nibble on but also eliminate pathogens and pesticides that can possibly be present.

How Often To Feed Oscars Vegetables?

You can safely give oscars vegetables 3-4 times a week. Since oscars naturally prefer a carnivore diet, it may be hard at first to get them to eat vegetables. But be consistent and keep on experimenting until you can decode what veggies they like.

Oscars can eat a wide range of ready-made commercial food like wafers, pellets, crisps, flakes, and tablets. In fact, these foods should actually make up the primary portion of their diet. That’s because they’re specifically formulated with oscar’s health needs in mind.

However, you have to be careful about the feeding style since oscars are messy eaters.

Mainly, the tiny particles produced by oscar’s chewing action will be tough to get rid of. So you’ll end up using more elbow grease than ever.

In my experience, giving pellets, wafers, and tablets is a lot more practical when the fish is still small. They swallow the pellets and tablets whole with a lot less gumming up. And as for wafers, they can be easily split into thirds and offered.

Always strive to offer a variety of prepared food. It’s wise to have at least half a dozen different kinds of prepared food to supplement oscar’s diet at any given time.

I recently purchased Hikari Cichlid Gold for my oscars that’s enriched with vitamin C after reading this research piece that highlights the importance of this particular nutrient for oscars.

Fresh And Frozen Food For Oscars

Fresh and frozen food should make up around 10% of an oscar’s diet. Seafood, both fresh and frozen, are good for your oscar as long as you give them in moderation. You can provide them scallops, clams, squid, and shrimps in alternating forms.

For instance, one week shrimp, next week squid, and so on.

And you can give readily available frozen crickets, mealworms, brine shrimp, and Mysis shrimp as treats every few days.

How Often Should You Feed Juvenile Oscars?

Juvenile oscars that measure between 1 ½ to 3 inches should be fed at least twice a day. If starved, these fragile babies can die soon. So, don’t skip any meals and keep a close eye to see if anybody’s avoiding the food. If that’s the case, you should try feeding different foods.

I feed my baby oscars to the point their bellies are slightly distended. This may sound like a lot, but it really isn’t.

How Often Should You Feed Subadult Oscars?

Subadult oscars that measure between 4 to 6 inches should be fed daily. If one day you give them two meals, the next day only feed them once. This feeding style will ensure they get their daily nutritional intake without the risks of overeating.

How Often Should You Feed Adult Oscars?

Adult oscars that have grown over 7 to 8 inches long should be fed once every alternate day. However, it all boils down to your preference and what your oscar is accustomed to.

Yes, of course, oscar fish eat other fish – both in the wild and in the tank.

You can give your oscar live fish as treats occasionally, but don’t make it a habit.

The fish you give can be a carrier of deadly parasites and can also lodge in your oscar’s throat. Clearly, the risks outweigh the benefits. So, I wouldn’t really recommend giving live fish.