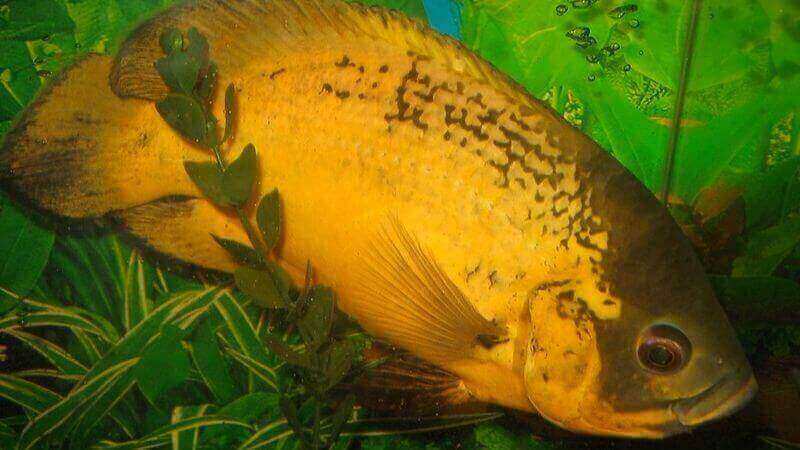 From small critters to giant blue whales, all animals need rest. And although rest and sleep are essential for the survival of practically all species, snoozing can look quite drastically different from one animal to another. So, do oscars sleep? If yes, what does it look like?

In this blog, I’ll tell all there’s to know about an oscar fish’s slumber routine.

Things will get interesting. So, buckle up!

Yes, oscar fish sleep. They retire to their favorite corners at the bottom of the fish tank and call it a night. Like us, they have sleep cycles. And their body also produces hormones that regulate their sleeping pattern and calibrate their internal clocks.

Fish don’t sleep like humans for a number of reasons. But for starters, they don’t have eyelids. Therefore, they cannot close their eyes.

However, when the night creeps in, oscars, like all fish, become less responsive. Their heart rate and metabolism decrease.

So far, scientists haven’t been able to study what goes inside a fish’s brain while sleeping.

So, we have to take an alternate route to study an oscar’s sleep – its behavior.

The following are the four criteria that prove oscars fish sleeps after all:

So, based on these 4 criteria, we can conclude that oscars sleep.

Whatever little we know about a fish’s sleep cycle is all thanks to zebrafish.

A zebrafish’s translucent skin means that you can zoom in on their individual brain cells and see what’s going on inside with an advanced microscope.

How Do Oscar Fish Sleep?

The sleep habits across and within different fish species are as varied as they come. Some oscars retire to a corner at the bottom, while others prefer sleeping in the caves. Some fish even like to sleep at the top or mid-air – so, don’t be surprised!

No brainer, but fish still need oxygen to survive. And they receive it when the water passes against their gills, which need a certain level of movement. So, even when asleep, you will notice that the fins move every now and then to produce water currents near them.

Why Do Oscar Fish Sleep?

Let’s have a quick look!

The restorative theory of sleep states that a being sleeps to help the body to recuperate. While sleeping, the body repairs itself, processes memories and new information, and lastly, strengthens one’s immune system.

On the other hand, according to the adaptive theories of sleep, a being sleeps to better adapt to its environment. For instance, sleep helps a creature avoid dangerous scenarios like meeting a predator.

How To Know If My Oscar Fish Is Sleeping?

Here are a few ways you can tell if your oscar fish is sleeping:

How Long Do Oscar Fish Sleep?

Oscars sleep for anywhere between 8-12 hours every day. Like us, they are diurnal creatures. When the sun goes down, their brains and bodies prepare for sleep.

If your oscar fish is deprived of sleep, the fish will become groggy and irritable, just like us! I guess there are a lot of similarities between them and us, after all!

You may have found your oscar lying motionless during the daytime as well. There’s nothing alarming about that. Yes, oscars do take naps – especially if they didn’t get a good night’s sleep the previous night.

Do Oscar Fish Have A Circadian Rhythm?

Here’s what happens to your oscar when the light goes off at night:

Unfortunately, researchers haven’t yet touched upon this area, but from the studies conducted on zebra danios, we can reasonably assume that most fish, including oscars, can suffer from sleep disorders.

Zebra danios were initially deprived of sleep for a couple of days using a mild electrical current during the experiment. And so, when returned to a typical day and night cycle and not disturbed, the fish slept for a longer duration.

The Stages Of A Fish’s Sleep

A human’s sleep cycle goes through 4 stages – two stages of light sleep, one stage of slow-wave deep sleep, and one stage of rapid eye movement. And although no fish possess a neocortex as we do, it’s been found that fish go through at least two sleep stages: slow-wave sleep and REM.

Can Oscar Fish See At Night?

No, as interesting as it would be, oscars cannot see at night. However, fish living in the deep seas and oceans have evolved to have highly sensitive eyes capable of seeing a wide range of color hues even in near-darkness!

How To Make Sure Your Oscar Fish Gets Enough Sleep?

The best and the most crucial way of making sure your oscar gets enough sleep is to put your tank’s light on a timer to mimic the daytime and nighttime routine. Also, make sure to add plenty of cover in the aquarium so your oscar feels comfortable at night.

How Long Should You Leave The Lights On For Oscar Fish?

Ideally, you should leave the lights on for oscar fish for around 8 hours a day. Even if you have plants in the tank, 8 hours of lighting will suffice for them to thrive.

Anything longer than 8 hours will mess with your oscar fish’s sleep cycle and deteriorate its health. It will also lead to algae outbreaks in the tank.

5 Tips To Help Your Oscar Fish Sleep Through The Night

Why Is My Oscar Laying On Its Side?

An oscar’s sleeping style depends mainly on its personality. However, if you often find your fish lying on its side, it’s a matter of concern. Some possible reasons behind this behavior are submission, stress, disrupted buoyancy, wrong water parameters, and sickness.

Let’s quickly go through the reasons one by one!

There’s always that one alpha male in the tank. Given oscars’ aggressive tendencies, they are often involved in brawls to reestablish the pecking order. So, if you find your fish lying on its side, it may actually be a sign of submission towards the new ‘leader.’

Stress is the most common factor behind an oscar showing quirks like lying on the side. To make matters more complicated, there are several potential causes of stress. It could be the presence of a bully in the tank, polluted water, and lack of food and space.

Make sure to subtly experiment until you find out the right reason and address it.

Oscars come from the pristine waters of the Amazon. In their native region, the water is warm, soft, and slightly acidic. Therefore, oscars don’t react well to the wrong water parameters or sudden changes in it.

If lying on the side becomes a common sight, you should first check the water quality. For that, we use the API Freshwater Master Kit and strongly recommend you do so too!

Disrupted buoyancy in oscars is often caused by bloating or an abnormality of the swim bladder. This directly hinders a fish’s swimming ability and forces it to swim in erratic patterns and lay on the side.

Fasting your fish for a couple of days and breaking the fast with cooked and skinned peas may help if it’s due to bloating. If it’s due to an abnormality of the swim bladder, you’ll have to contact the vet and seek professional help.

But not all reasons should be this grave! Sometimes, it’s just a weird habit. Or maybe your fish is adjusting to the new environment.

If you want to know more on the subject and signs of a dying oscar, don’t forget to check out this article!

Yes, oscar fish sleep. They don’t sleep as we do, but they sure love to tuck into their cozy spot at night – whether it’s a cave, a corner of the tank, or mid-air – and rest.

Although they don’t close their eyes as they don’t have eyelids, they lay motionlessly, lower their cardiac and respiration functions, and secrete a sleep-inducing hormone!