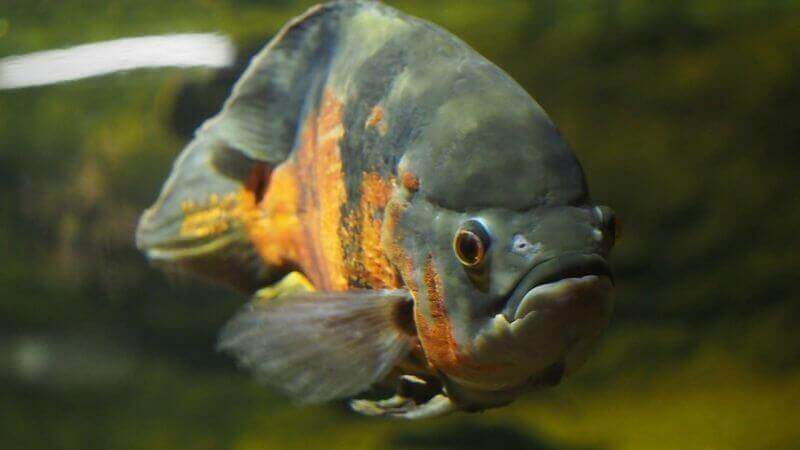 Am I the only one who finds oscars intimidating? I have my reasons! I once accidentally put my hands inside an oscars mouth feeding, and boy did that hurt! Do oscars have teeth? I was amazed to know.

In this article, I’ll tell you all about it.

Do Oscars Have Teeth?

Yes, oscars have teeth. In fact, they have 2 sets of teeth – one in their jaws and another in their throat. The teeth in the jaws are small and used primarily for grasping. Whereas the pharyngeal teeth in the throat are used to manipulate and process the prey.

How Long Are Oscar’s Teeth?

In adulthood, an oscar’s teeth usually grow as long as 2-2.5mm. And they’re perfectly capable of breaking the skin and inflicting injuries.

If frightened, an oscar will attempt to bite you. So, be careful when performing water changes or cleaning the tank, even more so during the mating season.

However, it all boils down to your fish’s personality. If your fish is used to human presence and feeding from the hand, it’ll rarely bite you.

As a matter of fact, oscars are well known for their ability to interact with humans and eat right from their hands. So, just don’t rub them the wrong way!

Of course, it hurts. Oscars have pretty sharp teeth. So, if you ever get bitten, it will hurt. In some cases, they’ll break into the skin, and it will bleed. I’m telling you from personal experience.

One user on a fish forum commented that he even has scars on his arm from when an oscar bit him. Apparently, it was during the spawning season!

What Kind Of Teeth Do Oscars Have?

Oscars have two sets of teeth. The regular one in their jaws, far back in their mouth. And there’s another set of teeth called pharyngeal teeth in the pharyngeal arch of the throat.

The teeth in their jaws are usually harmless to humans. Even if they bite you, there will be no injuries. It’s the pharyngeal teeth that you should be concerned about.

Their pharyngeal teeth help them grind and crush food into smaller particles before they swallow.

How Do Oscars Chew Their Food?

Interestingly, fish don’t chew food in their mouths as we mammals do. Oscars are suction feeders.

They use their jaws to suck in food. They won’t chew or tear the prey yet. They will then close their jaws and use the pharyngeal teeth to grind and chew the food before it’s swallowed.

Will Oscars Bite Other Fish?

Yes, oscars will bite other fish. They will sink their teeth into their tank mates at every chance they get. And they won’t just stop there. They will try to swallow the whole anything they can fit into their mouth.

Are Oscar’s Teeth Sharp Enough To Cause Harm?

The fish may die instantly or live on with an impairment for a lifetime.

Can Oscars Bite Your Finger Off?

No, oscars cannot bite your fingers off. As fierce as they are, they cannot sink their teeth into the human bone. However, they’re very much capable of tearing the skin.

I still have a scar from the time my oscar fish bit me. So, be careful.

However, if you have little children at home, it’s best if you don’t allow them to feed your oscar or prod it. This is because they have delicate skin and bones compared to us. An oscar’s bite will inflict a much severe injury in their case.

Why Are Oscar Fish So Aggressive?

Oscars are innately aggressive fish like most cichlids. Thousands of years of evolution has wired them to be this way. However, environmental factors also play a pivotal role in fuelling oscar’s anger.

Here are a few reasons oscars get aggressive:

The Tank Is Too Small

Oscars are big fish. They grow over 12 inches long on average. Therefore, they require a big tank. On top of that, they are incredibly territorial. They will claim tiny territories in the tank and fiercely defend them.

The minimum recommended tank size for an oscar is 55 gallons. However, I’d say the ideal size would be 75 gallons. You can then add 30 gallons each for every additional oscar.

If the tank is too small, oscar will not get enough swimming area. It will bump into other fish in the tank quite often. And these things will naturally get into its nerves.

Therefore, if you are housing an oscar fish or plan to do so, get a tank as big as possible.

While researching for this blog, I came across a fellow hobbyist who was quite terribly bitten by an oscar during the mating season. And that’s precisely why I have included this point.

Like all cichlids, oscars get highly competitive and intolerant of others during the mating season as they look to form a pair with a suitable mate.

They will perceive other male oscars or similarly-sized fish as competition and try to fight with them. With oscars, fighting usually involves jaw locking, jumping at each other and pushing around.

The oscar will especially be intolerant of bottom dwellers like plecos and catfish as it hunts for a suitable place to breed at the base.

As hardy as oscars are, wrong water parameters just don’t sit well with them. If the environment is not conducive, they will stress and eventually lash out at other tank mates.

So, if you find your oscar more sullen than usual, it’s time to conduct a water test and evaluate the tank’s overall environment. Maybe the ammonia levels have spiked, or the water’s too cold for their liking.

Here’s a quick look at the desired water parameters for oscars:

Always try to emulate oscar’s natural environment in the tank as much as possible. For instance, they come from the soft and acidic waters of the Amazon. So, if you keep them in alkaline water, their protective mucus layer will begin to wear off and make them prone to secondary diseases.

And we recommend using a powerful canister filter to get rid of the tank’s gunk every day. Oscars produce a decent amount of waste daily!

Oscars have a big appetite. Therefore, if there’s not enough food for them to munch on, it’s only natural to get hangry!

Since oscars tend to fight over resources, you should avoid giving one or two big meals per day. Instead, divide the portions into 3-4 small meals, and give them no more than what they can eat within 30-40 seconds.

This feeding style is known to help curb their possessiveness over resources.

Are Oscars Related To Piranhas?

As exciting as it would be, no, oscars and piranhas aren’t related. Oscars come from the cichlid family that includes the likes of angelfish, convicts, and jack dempseys. On the other hand, piranhas belong to the characin family, including fish like silver dollars and neon tetras.

Can You Keep Oscars And Piranhas Together?

Yes, you can keep oscars and piranhas together, but it will take a lot of work. Piranhas won’t harm your oscars as long as they aren’t super hungry. Oscars grow big fast and are pretty assertive – thus, they can easily defend themselves against piranhas.

However, you will need a massive tank to accommodate these two together. That’s because both species need at least over 75 gallons per fish.

On top of that, piranhas are schooling fish. So you need to keep them in groups.

Final Words: Do Oscars Have Teeth?

Yes, oscars have teeth – not just one but two sets of teeth! The regular teeth are located in their jaws, way inside their mouth. And the pharyngeal teeth are positioned in the fish’s pharyngeal arch of the throat.

They use their pharyngeal teeth to crush and chew the food.

And yes, oscars can bite you! It can be quite painful. But they aren’t really capable of inflicting serious wounds.

Be careful when feeding them or performing water changes. And if there are little children in your home, tell them to be extra careful!