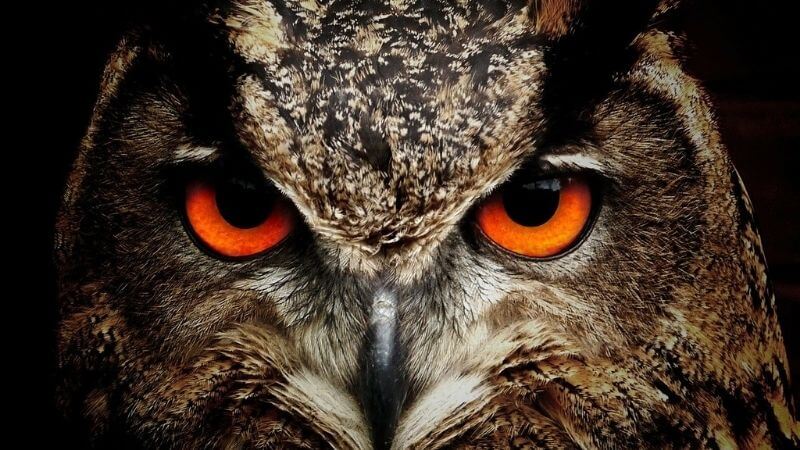 Despite appearing docile and unassuming for most of the time, owls are among the efficient hunters of the night. Their keen sight can target a rodent from half a mile away.

Owls are apex birds of prey and are considered to have no superior predators above them. They devour everything that they can hunt.

If that is so, will they be able to hunt something tough to crack? What about turtles? Can owls eat them?

Owls are carnivores and will eat anything that moves in their preying zone. Hence, they will undoubtedly eat turtles. Their beaks are sharp enough to tear through a turtle’s skin and will devour it without much hassle.

Owls can scoop out with prey much larger than turtles. Therefore, you need to be extra careful if it is lurking near your turtle pond.

So, How To Protect Your Turtle From An Owl?

You can use pond netting, increase the pond’s depth, add a bubbler, cover with plants or put a motion-activated sprayer in your turtle pond to keep owls away.

Let me explain in detail.

A pond netting is the most direct way to deter owls and other birds of prey from targeting your turtles. It offers small holes which allow sunlight, air, and food to enter while keeping the birds out.

Pond nets do not cost much. You can buy them in a nearby store or get them online. The only downside of putting a pond net is that it can take away the aesthetics of your turtle pond.

Here’s a pond netting that you can use to keep your turtles safe from every kind of bird of prey:

Despite having a keen eye to spot prey from miles, the owl will have difficulty spotting your turtle in a bubbler-installed pond.

This will force it to go elsewhere and search for an easy meal. Unlike pond net, bubblers look fantastic and are aesthetically pleasing.

Here’s a water pump that is ultra-quiet:

You can make the pond deeper if you want it to become a safe haven for your turtles. However, the depth of the pond also depends upon your turtle species.

Generally, a 24” deep pond will be enough to keep owls and other predators away. However, do not make it any deeper than that.

When the time comes, it will be hard for you to clean. Also, some turtles can drown in that depth.

If you want to know how turtles drown, check out this article:

In your turtle pond, you can add aquatic plants like water hyacinth, water lilies, water lettuce, taro, mosaic, and blue iris. This will provide cover for your little friends and keep them hidden when predators lurk nearby.

Turtles can hide under the broad leaves of plants. And the owl will not go around pushing these plants to hunt down turtles.

Here’s a link if you want to get some water hyacinth for your turtle pond:

You can go creative while designing a pond. Plan tunnels and caves where your turtles can explore and also hide from the predator birds.

However, do not go overboard with this. If there are too many hiding places, it might be even harder for you to spot your turtle.

Put Bird Statue As A Decoy

Sometimes the best way to scare off predators is by putting another predator in place. Let me tell you how.

Owls will never come to a pond if there’s another bird there. Unlike vultures, they are solitary hunters and do not mess with others’ dinner.

Therefore, placing a decoy of a heron or flamingo by the pond will keep owls away.

These bird statues do not cost much and give a vibrant feel to your turtle pond.

This heron decoy is much realistic than other fancy ones. Get yours on amazon.

Use A Pond Fountain

The effect of a pond fountain is similar to bubblers. Aesthetically, it is even more pleasing. Furthermore, it also functions as a sprayer if owls get too close.

If any single method doesn’t work to deter owls from preying on your turtles, you should go full throttle.

Set up a decoy, put plants and hidings, install fountains and bubblers, and make the pond deep enough.

If you think that doesn’t work, hang some bright lights. This should keep the owl from venturing into your reptile’s territory.

Small-sized turtles become prey for most predators. Their shells aren’t developed enough to protect them from the predator’s claws or beaks.

Owls will definitely eat a smaller turtle with an underdeveloped shell.

They will adapt to most environments and change their feeding habit accordingly.

Hence, when present in an area populated with turtles, they will surely try to sneak on your reptile pals.

If you want to know more about what other animals eat turtles in a pond, check out these articles: