Do Slugs Eat Snails? Or Is It The Other Way Around? 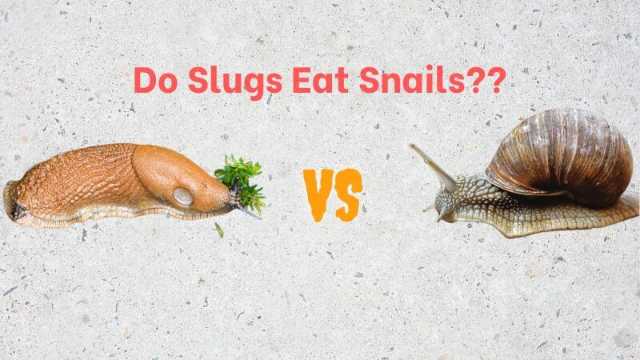 Both slugs and snails are gastropods, so they share the same heritage before evolution shaped them differently. With more than 60,000 species of snail and slugs combined, one cannot fathom how many unique characteristics they have in common.

However, we will not discuss their mutual attributes in this episode.

Today the topic is a unique one. It is whether slugs eat snails or not.

Omnivore slugs eat snails, insects, worms, and dead matter. So, although they consume a wide range of food, they will still eat snails that are smaller than them.

And there are species like leopard slugs and leatherleaf slugs that prefer to eat their own kind and snails than other foods.

Leopard slugs are the largest land slugs. They are often found near human habitation. They dwell in damp areas, especially shady spots in your garden, cellars, and under logs.

These slugs are omnivores and eat anything from dead plants and nematodes to other slugs and snails. Like some carnivorous snails, they hunt down prey by tracking the mucus left by other snails.

While on a wild hunt, they show an astonishing speed (for a slug) – six inches per minute.

It is easy to spot them in the wild as they have dark spots all over their body, just like the leopards. Hence, the name!

Contrary to popular belief that slugs only eat plants and leaves, most slugs can eat anything from plants and worms to decaying matter and baby snails. Baby snails are an excellent source of protein for slugs.

Slugs are scavengers and will consume anything from baby snails to their eggs. Therefore, they consume snail eggs to satiate their hunger and meet protein and calcium demands.

Can You Keep Slugs And Snails Together?

Not every species of slug can be kept with snails and vice versa. Omnivorous and carnivorous slugs won’t hesitate to consume tiny snails when kept together. Hence, it is recommended to keep them in separate enclosures.

Some species like the garden snails can be kept with slugs. These snails grow big and are seldom targeted by carnivore slugs.

Furthermore, garden snails are prolific breeders. So, even if your slugs consume a bunch of them, you will still have plenty of remainder snails.

So, what happens if you keep slugs and snails together?

Snails dislike sharing their habitat with slugs. Once your snail spots the slime released by slugs, it will retreat from the track and go into hiding. Unfortunately, snails are spooked easily, and the slug slime is not helping either.

Did you know that slugs, too, have a shell? Yes, they have it inside their body. And having a cover means that they require a fair amount of calcium to remain healthy.

And what can be more calcium-dense than a snail with its shell? So, it won’t be a surprise to find your slugs go after snails when they need calcium in their bodies.

Do Slugs And Snails Mate?

According to the revised taxonomic classification, slugs and snails are grouped under the class Gastropoda. Gastropoda further consists of six subclasses – Caenogastropoda, Heterobranchia, Neomphaliones, Neritimorpha, Patellogastropoda, and Veligastropoda.

Heterobranchia and Neritiimorpha are the two subclasses where snails and slugs share a common ancestry. From there on, there exists a distinct taxonomic classification between snails and slugs.

Do Slugs And Snails Eat The Same Kind Of Food?

Yes, most slugs and snails are omnivores and eat the same kind of food – fungus, algae, vegetable, fruits, and worms. However, there are predatory species in both groups. So, it all depends on the species you have in your care.

As I said, when it comes to diet, snails and slugs share the same menu. So, if you house them together, you need not worry about serving them different meals.

However, there’s an important thing you should know. Slugs are much quicker than snails, so they will be the ones to reach the food first. And this might leave your snails famished.

So, serve them in such a manner that each party has quick access to a sufficient amount of food.

Some carnivore snail species like rosy wolfsnail, decollate, and gray lancetooth include slugs in their diet. They track down slugs by following their slime tracks – making them highly effective hunters.

Rosy wolfsnail, in particular, has caused quite a commotion in Hawaii. At one time, they were the favored candidate to bring down the population of giant African snails.

However, they didn’t hunt down the African snails only. Instead, they began to devour all kinds of native slugs and snails. Many slug and snail species have now gone extinct because of them.

Another carnivore snail, gray lancetooth, is also a veteran at tracking slugs.

No matter the size, it will show its blistering speed (for a snail) to attack its victim with its radula and foot. So, a slug’s enormous length has nothing on the lancetooth.

And surprisingly, it also possesses superhuman strength that helps it carry and transport the prey to its private space.

So, what makes these snails effective in hunting down slugs?

Of course, the speed!

Slugs are fast compared to most snails, but carnivore snails are 3 to 4 times faster than average snails. So, this gives them a competitive advantage, helping them track even the fastest of slugs.

Yes, carnivore snails do eat baby slugs. They will track them down or eat the baby slugs that trespasses in their territory. As a matter of fact, baby slugs are one of their most accessible and favorite prey to target.

Almost all snails will eat slug eggs. Even the omnivore ones will not miss the opportunity to gobble up these protein-rich shelled gastropods. So, if you want slug eggs safe from a snail, you’d better relocate them immediately.

Many hobbyists assume that slugs and snails are the same species and keep them in the same container by default.

However, you should steer clear of making that mistake. When slugs grow bigger than snails, they often try to eat smaller snails. A clear display of survival of the fittest.

I have seen slugs preying on snails and their eggs. They are pretty fast, too!

Also, when it comes to feeding time, it will be an eating frenzy, which leads to a conflict as both prefer the same kind of food.