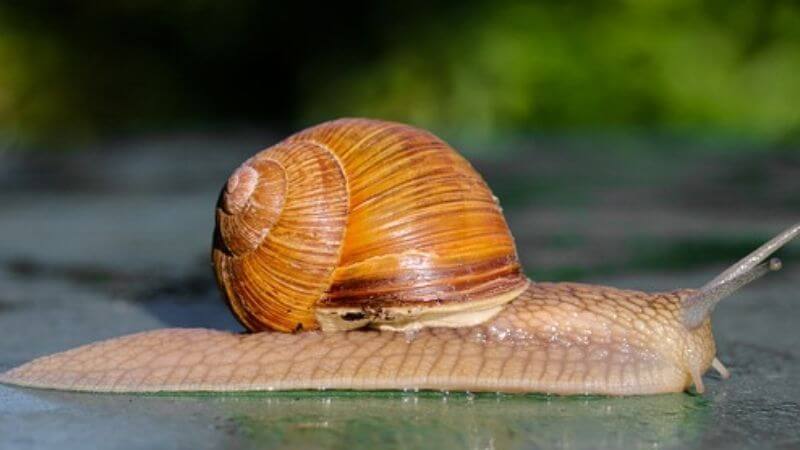 Oxygen is the lifeline of most organisms on earth. Even plants need it to convert food into energy. So, is there any possibility that snails could survive anaerobically, just like bacteria?

Like every other creature on earth, snails do need oxygen. They use oxygen for the same reason that we do – to breathe, grow, reproduce, and convert food into energy.

DIfferent snail species have different kinds of breathing techniques. Some respire with the help of gills, whereas some inhale air through the breathing hole located inside their mantle.

Did you know that snails are divided into three categories based on how they breathe?

Species with gills in front of their heart fall under this category. This subclass includes marine snail species like conches, cowries, limpets, murexes, periwinkles, volutes, whelks, and cones.

Although this group mainly has marine snails, some freshwater and terrestrial species come under this category, too.

Some amphibian snails in this group have unipectinate gills on one side and lungs on the other, enabling them to breathe on both land and water.

These snails also have separate sexes.

They can absorb oxygen from the water with the help of gills. Unlike most freshwater species, they do not need to come to the surface to take in oxygen.

Snails with lungs are in this category. Although they once had gills, they lost them during evolution. But it is a known fact that pulmonates are more advanced than other snails.

Their permeable skin allows them to intake oxygen and pass it to the pallial lungs, from where oxygen is forwarded to all parts of the body.

This category enlists both terrestrial and most freshwater snails who need to resurface to get oxygen.

And they are hermaphrodites, which means they have both male and female reproductive organs.

In Greek, “opistho” means behind or in back. So, the word opisthobranchs mean creatures with gills behind their heart.

Not only snails, but this subclass also encompasses approximately 2000 gastropods. Sea slugs, red-lined bubble snails, and sea hares are some popular gastropods in this category.

One interesting difference between snails in this group and the other two is that members of this subclass have reduced shells or no shells at all.

And their mantle cavity is generally located at the rear end of their body.

A similarity they share with pulmonates is that they also have both male and female reproductive organs.

Can Snails Live Without Air?

Not all snails require air to intake oxygen. Only terrestrial snails and some aquatic snail species need air to fulfill oxygen requirements. The aquatic ones will come up to the water surface for respiration and again dive back in.

Marine biologists have discovered that aquatic snails who breathe underwater are poor at regulating oxygen uptake compared to those who breathe air.

This evidence suggests that despite lacking gills, terrestrial snails are still regarded as an advanced species.

How Long Can Snails Go Without Breathing?

There are no known gastropods who can go without breathing. Like every organism, snails breathe to live. So, snails that cannot breathe or are deprived of oxygen will die instantly.

How Long Can Snails Hold Their Breath Underwater?

The marine snail species can be underwater for as long as they want to be. In fact, they cannot breathe air. However, land snails are also known to be able to hold their breath for a couple of hours underwater.

Hobbyists have reported that their terrestrial snails were doing just fine even after being underwater for 24 hours.

How Do Freshwater Snails Breathe?

Some freshwater snails have external gills that help them breathe underwater, whereas several species need to come to the surface to breathe through their snorkel-tube-like organ, also known as a siphon.

The siphon acts as an inhalant, through which water is drawn into the mantle cavity and over the gill for respiration.

For example, ramshorn snails put small air bubbles as oxygen reserves inside their shells. They take it with them and dive underwater. After they use up all the air under the mantle cavity, they will resurface and replenish it.

Some amphibian snails have both gills and lungs for respiration. They can breathe through their skin and gills, located in their palatial cavity.

However, their ability to regulate oxygen underwater is relatively poor than on land.

How Do Land Snails Breathe?

Land snails intake air through a network of thin-walled blood vessels present in the mantle cavity under their shell. Air passes through the small opening pore known as pneumostome. Next, they have the necessary muscles to open and close the breathing pore by raising the mantle cavity. Finally, the air reaches the lungs, which is again delivered to all body parts.

What Do Snails Need To Survive In A Container?

The container used for housing your snails should have small holes to let air circulate freely. Add some potting soil along with another substrate. Finally, put some leaves and tree barks to mimic the snails’ natural habitat.

Yes, land snails who breathe air for oxygen can drown. Not only terrestrial snails, but some freshwater species who breathe through lungs can also drown if they aren’t able to reach the surface.

The answer to do snails need oxygen is yes; snails definitely need oxygen. As a matter of fact, only a few types of bacteria are anaerobic enough to survive without oxygen.

It has been found that snails living in warmer water need more oxygen. So, if your snail resurfaces frequently, it is a sign that the water is warmer than usual.