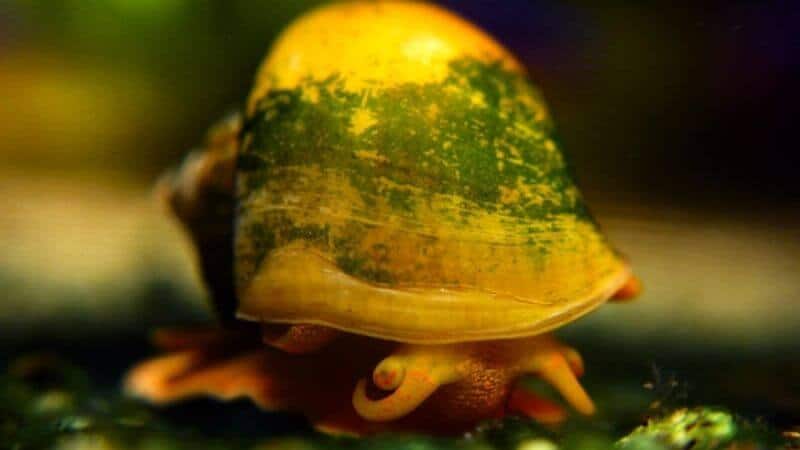 Countless animals shed their shells to house their ever-growing body. To name a few, turtles and hermit crabs fall under this category.

Apart from accommodating their body, factors like incorrect water parameters, formation of algae crust on the shell, presence of pathogens, and poor diet are also some reasons behind shedding.

So, does this phenomenon manifest in snails, too? Are snail shells similar to the examples mentioned above?

In this episode of snails, we will discuss if snails shed their shells and some more queries.

Snail shells do not have bone cells. And without it, no cells can be activated to perform shedding or repair shell damage. Therefore, snails do not shed their shells.

However, in the case of turtles, they have bone cells spanning all over the shell’s surface. And if a turtle shell somehow cracks, these cells secrete protein and mineral deposits on the cracked spot.

Unlike turtles’ bone cells, snails have mantles, the outer margins of shells, which secrete protein and calcium underneath the shell.

The mantle is positioned only at the opening – from where the snail peeks slyly. Due to this limitation, a snail cannot precisely target the affected area to deposit calcium for healing it.

What Are Snail Shells Made Of?

First comes the uncalcified layer, composed of protein and chitin, which combines and results in a naturally produced polymer.

The second layer is the deposit of a prismatic layer, followed by an inner pearly layer, also known as nacre.

And due to the fusion of three layers, the light refracts upon falling on a snail’s shell – which is why we can observe the iridescence of the nacre.

Now, back to how snail shells are formed.

Imagine building the foundation of a house. First, you lay down the steel, which here is the protein. Then comes the pouring of ready-mix concrete over it, and that’s the mineral in this case.

This is how the mantle tissue located in a snail’s shell will use the combination of protein and calcium to expand its shell.

But, What About Snail Keepers Reporting About Flaking And Peeling Shell?

Yes, snail shells show signs of flaking if their shell isn’t hydrated. This is often seen in terrestrial snails during winter. It is similar to having dry skin when there’s not enough moisture in our skin.

Dryness can be linked to rising temperature, and consequently, it can be the reason behind a snail shell peeling.

A simple solution – put polyunsaturated fat over your snail’s skin and shell. For that, you can use extra virgin oil or coconut oil.

Can Snails Live Without Shell? Will They Die If Their Shell Breaks?

If we altogether remove a shell from a snail’s body, the snail will not survive. However, if it sustains repairable damage, it can survive. This is because snails have an excellent regenerative ability that helps them repair the damaged shell.

Did you know that snails can even regenerate their eyes if they lose them by chance?

So, a snail will not break a sweat to repair a cracked shell – no muss, no fuss. The progression will speed up if the snail has easy access to calcium. Captive snails will thus patch up their shells faster than snails in the wild do.

How Snails Fix Their Cracked Shell?

When a snail has a cracked shell, its body will recruit an amebocyte, a mobile cell that spreads over the damaged portion and serves as a temporary layer.

This cell is released by the glands located at the snail’s mantle. It then fuses with calcium and hardens the temporary layer.

It usually takes about a week or two to complete the renovation of the critical area.

A splintered shell will need a sizable amount of calcium to heal fast. And if the damage is severe, the injured region will draw calcium from other parts of the body.

However, this will have repercussions, thinning the shell from the insides and depriving the snail of essential nutrients.

Accumulation of layers will definitely leave marks or signs to show where the new shells form, but it will not cause any inconvenience to the snail.

What Does It Mean If Snail Shells Turn White?

If you notice your snail’s shell turning white, it is most likely due to a calcium deficit. A snail deprived of calcium will have a thinner, bleached shell, whereas a well-nourished one will have a dense, gleaming casing.

So, try feeding calcium-rich foods to your snails daily.

Here are some foods that are a good source of calcium:

It might not be practical for you to go grocery shopping every day to fulfill your snail’s calcium demands. So, I recommend you stock up on calcium supplements available online.

Here’s one I give to my snails:

And if you need an all-round food that fulfills every kind of dietary requirement, I suggest you go for the Flavored Pet Land from Snout And Snell.

Another reason behind a snail shell turning white could be its deteriorating health. Poor diet, crowded tanks, and incorrect water parameters can make a snail sick.

Apart from the usual suspects, coralline algae in the tank could also be the reason behind a snail shell turning white.

These algae come in a wide range of colors, and white is amongst the most. They attach to a snail’s shell and begin crusting on top of it. This can make the shells appear white.

Final Words On Do Snails Shed Their Shells?

Even if you see snails with flaky or peeled skin, technically, it’s not a case of shell shedding because snails do not shed.

This usually occurs if a snail is ill or impoverished.

I cannot stress how essential calcium is to snails.

Basically, calcium is their lifeline. Snails need it to grow and repair their shells.

If a snail with a cracked shell is provided a calcium-rich diet, it can recover within weeks.