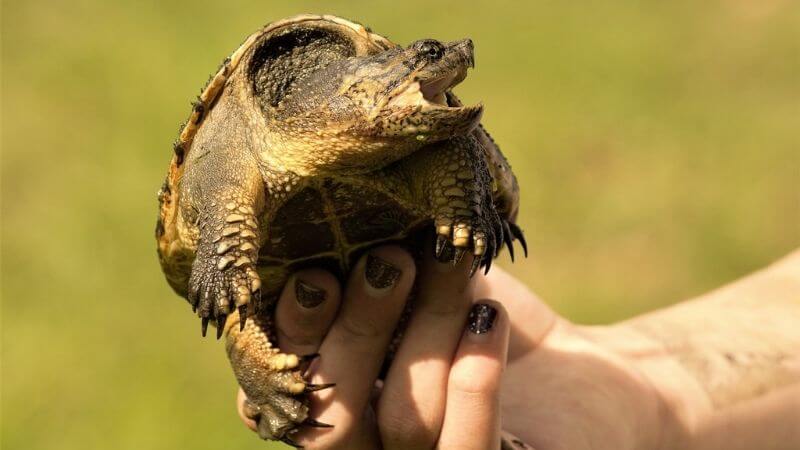 Snapping turtles are omnivores and will try to consume everything under the sun. They love to eat raw, processed, fried, and boiled food – basically anything they can lay their mouth on. Especially, baby turtles have a wide and varied appetite that bolsters their growth, while older turtles prefer a herbivore diet. Snapping turtles in the wild will even hunt down ducks, ducklings, and muskrats for food.

Yes, a Snapping turtle large enough to attack ducks can eat ducks. They mainly go for the ducklings that haven’t reached the flying stage. A turtle on land is slow, but its speed quadruples in water and will hunt down ducks and fish quite easily.

The sight of a Snapping turtle feasting on a duck in the land is rare because they are slower on land.

However, there are several videos of these ferocious predators snacking on ducks in water.

Here’s one of an Eastern snapping turtle in action:

Snapping turtles, as omnivores, will eat every sort of meat. Snapping turtles have a great biting force and will quickly pounce upon animals, birds, or tiny turtles that come nearby. So, if you have a Anapping turtle as a pet, you can provide them with meaty products—both live and dead to diversify the menu.

A baby snapping feeds on bloodworms, unfrozen fish, shrimps, and other types of meats. Meat provides them with protein, which is essential for their shell and overall development.

However, baby turtles consume much less meat than adults. Also, overconsumption of meat can result in pyramiding in turtles.

Yes, a snapping turtle will eat fruits. However, it would be best if you gave them only in moderation. Fruits don’t form a good chunk of their regular diet in the wild.

Also, fruits are highly rich in certain acids and vitamins, which might not be healthy for your turtle. So, give them as a treat monthly or on some occasions.

Foods To Avoid For A Snapping Turtle

Although snapping turtles aren’t too picky about what they eat, there are certain food you should avoid to prevent an upset stomach and subsequent complications. Don’t give them junk food since they contain preservatives and artificial flavors. Likewise, steer clear from stored raw meat.

Snapping turtles will feed on almost anything. However, avoid feeding human foods to a turtle. They can disrupt the bowel system.

Please do not give your turtle French fries, hamburger, pizza and other junk foods which we consume. These foods have high amounts of oil and cholesterol, with the addition of preservatives that are even hard for us to digest. Avoid these foods at all costs.

Snapping turtles in the wild consume raw meat, and you might think that there’s no harm in giving your turtle some raw meat too. However, there’s a difference between hunting and eating raw meat. The raw meat we buy in stores has parasites and bacteria in them, which can make your turtle ill.

Avoid giving canned fish like tuna to your Snapping turtle. These canned fish have high doses of preservatives added to them, along with a high amount of salt. Even though your pet turtle won’t say no to your offering, it may have to face severe repercussions once the food makes it way to the turtle’s stomach.

Whenever a bird or fish is near them in the pond, their predatory instincts will kick in, and they’ll spare no minute to hunt them down.

However, if you plan to feed your captive snapping turtle some ducks, avoid giving them raw meat. Instead, boil the duck and slice them into small pieces so that your turtle doesn’t consume harmful parasites and bacteria.