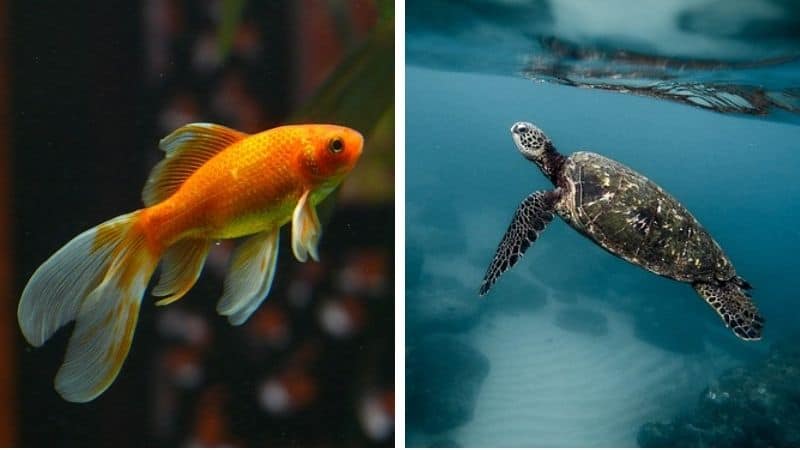 As omnivores, turtles have a big platter that fits everything from various plants and insects to snails and fish. However, depending on the size, age, and nature, turtles are selective about the fish they gobble.

And that brings us to our query of the day:

Yes, turtles eat goldfish, who are often kept in turtle tanks as feeder fish. However, goldfish have spiny bones that can damage your pet turtle’s throat and intestines when gobbled up. Likewise, goldfish also have fat content, which isn’t necessarily good for your turtles.

Thus, goldfish aren’t the most ideal feeder fish for your turtle.

And as it turns out, they aren’t either the most suitable tankmates as well.

Can Turtles Live With Goldfish?

Many times, fishkeepers have tried to cohabitate turtles and goldfish in the same tank with varying degrees of success. However, from potential snacking and territorial aggression to the insane amount of waste they’ll produce, turtles and goldfish aren’t naturally well suited to live together.

In most cases, turtles will try to scratch with claws and nip on purpose. They’ll also attempt to eat the goldfish after a tiring chasing session.

On the flip side, some owners report that their turtles are oblivious to the goldfish’s existence.

While the tank’s size and the turtle’s age are important factors to consider, it often boils down to the turtle’s breed.

What Turtle Species Can Live With Goldfish?

There’s no 100% guarantee on how your turtle will react to living together with goldfish. But the general consensus is that Red-eared sliders, Northern Red-Bellied Turtles, and Peninsula Cooters are compatible with goldfish tanks/ponds. However, it’s best to avoid Snapping Turtles, Soft Shelled Turtles, and Musk Turtles. All these 3 species are known for their strong biting tendency.

One popular theory among aquarists is that turtles are less aggressive towards goldfish if introduced to the latter’s habitat.

On the contrary, introducing a goldfish to a turtle tank will almost always yield to injured and missing fishes.

Another critical factor to consider is the turtle’s age. Older turtles often transition to a herbivorous diet, while juveniles are likely to experiment with fish as food.

The blog’s title is ‘do turtles eat goldfish,’ but you’d be surprised to know that tables can turn quickly. Find out how.

What Goldfish Species Can Live With Turtles?

Bigger goldfish species like Shubunkins, Comets, Orandas, and Wakins can grow between 10-15 inches. Thus, your pet turtle can be at the receiving end of bullying and tormenting from these big fish. Small and mid-sized species like Twisty Tail Goldfish, Butterfly Goldfish, and Ryukins have a chance at survival if there’s enough tank space and hideouts.

That being said, there’s no perfect goldfish or turtle breed that’ll effortlessly cohabitate and live happily for the rest of their lives.

At the end of the day, for turtles, fishes are snacks, not friends.

Why Shouldn’t Goldfish And Turtles Live Together?

Besides being in different tiers of the food chain, the other two main reasons goldfish and turtles shouldn’t be kept together are diverse water parameter needs and the ridiculous amount of waste they’ll produce. By default, this means a high degree of maintenance and labor is required.

Goldfish are essentially the turtles of the fish world. They can poop impressive amounts at impressive rates — leading to a quick buildup of ammonia in the tank. Now couple that with the waste your turtle will produce, and voila, a perfect recipe for a dirty tank.

If you’re dealing with a recurrently dirty and cloudy turtle tank, this filter here by Penn-Plax can be a good upgrade.

Available for sizes from 30 gallons to 200 gallons, this canister filter can use any combination of media to effectively remove ammonia and nitrites. And the large media capacity means plenty of options to cater to your tank’s media needs.

However, what I liked the best about this filter are its flow valves that can rotate 360 degrees for easy maneuvering in even the tightest aquarium cabinets.

Freshwater natives, goldfish need cool water temperature to survive and thrive. Anything higher than 74°F is warm for goldfish. Meanwhile, healthy adult turtles need temperatures between 70-80°F. Although both species prefer slightly alkaline water, the temperature difference makes it hard to house them together.

Consistent and long-run exposure to unsuitable water parameters will only invite unsought health complications and shorten the lifespan.

Both turtle and goldfish require large enclosures, produce ample waste, and are prone to territorial aggression. Thus, you will need to invest in a big tank if you want to raise them together. Consequently, you will have to upgrade to bigger filters, heaters, and equipment.

The cost can mount up to considerable amounts and can turn out to be an expensive hobby. That’s why it’s best not to raise turtles together.

What Fish Do Turtles Eat?

In the wild, turtles devour a wide range of fish, including jellyfish. Whereas captive turtles are often fed feeder fish like guppies, platies, bluegills, mosquitofish, tetras, and zebrafish. But you have to be mindful of the amount your turtle consumes.

For starters, I’d suggest beginning with a small school of tetras or zebrafish. They’re easy to buy, available at low prices, and only grow about 1-2 inches long in captivity.

But most importantly, they’re smart, quick, and have great reflexes. Thus, your turtle won’t be able to consume a whole school in a short period.

Can Feeder Fish Kill A Turtle?

It seems highly unlikely, but yes, feeder fish are perfectly capable of killing turtles. Their spiny bones can inflict injuries in the throat and intestine. Likewise, depending on where the feeder fish were caught and raised, they can be carriers of deadly parasites and bacteria.

Feeder fish with high-fat content can also cause Vitamin E and Thiamine deficiency.

That’s why make sure that you weigh in all the risks and extra work you’ll have to put in if you decide to add feeder fish to the turtle tank.

Conclusion On Do Turtles Eat Goldfish

Here’s a quick rundown of all the essential bits.

Yes, turtles eat goldfish, both in captivity and in the wild, if available.

And although goldfish qualify as fisher feed for turtles, they aren’t necessarily great for your pet’s health. From internal injuries to vitamin deficiencies, there are a few caveats you need to take care of.