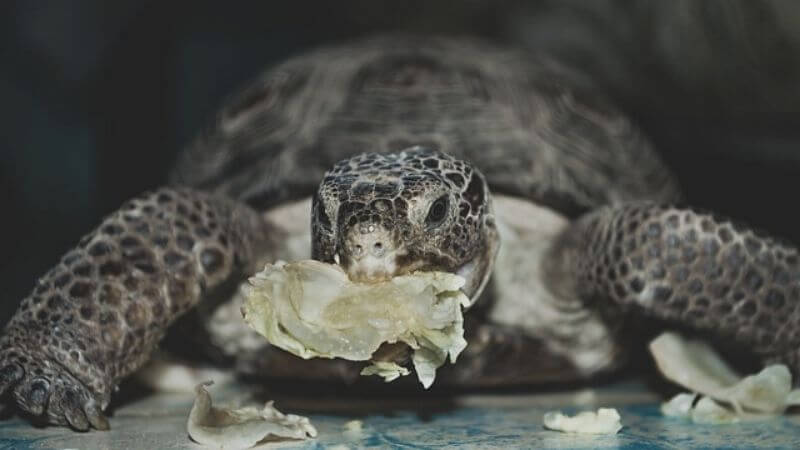 There are several videos of turtles eating other turtles on the internet. This display of cannibalism can be disturbing for us, but it is a common sight in the animal kingdom.

Did you know that there are over 1500 recorded species who eat their own kind?

So, in this episode of turtles, we will be exploring this brutal behavior.

By the end of this article, you will know why they show such unmerciful behavior towards their own kind and how you can prevent your pet turtles from sharing this same fate.

Do Turtles Eat Other Turtles?

Although turtles do not take cannibalism as a sustainable way to fill their appetite, they can still eat other turtles when the need is dire. Turtles eating other turtles can be associated with overcrowding, lack of food, basic natural instinct, mating competition, and asserting dominance.

Let me explain them.

An overcrowded tank is a primary culprit for most cannibalistic incidents in an enclosure.

So, in a congested tank with two or more turtles, there’s always a high chance of frequent duels. And often, these duels turn deadly.

Turtles are solitary animals who like their own company. This means they are territorial and will not entertain other turtles encroaching their area.

When there are two males in the same tank, the fight ignites even quicker. Usually, turtles do this to show dominance and establish a hierarchy in the tank.

Turtles are naturally aggressive towards each other and will go head to head at every chance they get.

These underwater battles will burst into flames when there’s a female turtle involved. Males will often engage in fights to become the potential mating partner for the female.

The bigger turtle often wins the fight by chopping off the challenger’s head and goes about eating it.

Turtles aren’t to be blamed even if they eat their own species. I mean, look how they survived millions of years. Hence, cannibalism indeed had a part in preventing their extinction.

So, if there’s a shortage of food in the same tank, they will resort to cannibalism. The first sign will be them eating other dead turtles.

Next, the bigger turtles will pick on smaller turtles or baby turtles.

One such incident took place back in 2017 at a Malaysian resort. The resort was supposedly a turtle conservation sanctuary pool.

The bigger turtle in that pond killed and ate smaller turtles. When inquired about it, the caretaker stated that the episode was considered normal, and larger turtles usually do that when hungry.

Well, not much of a turtle preserving sanctuary then, is it?

Here’s the link for the clip. Watch at your own discretion, folks.

It is their natural instinct to think of smaller turtles as prey and eat them without second thoughts.

So, there’s always the risk of bigger turtles biting and gobbling up baby turtles in a confined area.

Turtles also know when other turtles are sick or are about to die. The healthy turtles will not hesitate to attack and bite off the limbs of feeble turtles.

Even mother turtles are found to consume their weak babies. Looking at the bright side, you can tell that they are just putting them out of their misery.

That’s one way of looking at cannibalism in turtles.

Turtles are fine living together until they aren’t. Usually, turtles grow more aggressive and territorial as they get older.

They will fight over food, mating partners, territories, and god knows what else.

They display aggression and will fight till one of the turtles backs down or dies. The victor will rip off the assailant’s body after its death.

You cannot tame your turtles to be “nice.” Aggression is their natural predisposition. So, you should make peace with yourself, thinking they are just turtles being turtles.

Which Turtles Eat Their Babies?

Almost all turtles eat their babies. It is not in their behavioral suit to take care of the eggs or hatchlings. Mother turtles leave their nest after laying eggs.

So, it makes no difference whether the baby turtle she just killed was hers or not. Among turtles, snapping turtles are found to be more cannibalistic than other species.

Do Turtles Eat Their Own Eggs?

Yes, turtles can eat their own eggs but under certain conditions. The mother turtle will eat her eggs if she is unable to find a suitable nesting area. She will lay her eggs in the water and eat them.

Mother turtles instinctively know if the nesting spot is favorable enough for their eggs to hatch or not.

After laying her eggs, she will confirm which eggs will hatch and which won’t. Then, she will eat the non-hatching eggs to supplement her calcium levels.

When a pregnant turtle cannot find a nesting area, she will lay her eggs in water, which she will eat in due course.

A gravid turtle requires sandy or soil as a substrate for nesting. She will lay her eggs only when she finds a suitable spot to nest.

So, if you find your turtle destroying her eggs, it could mean that the nesting spot isn’t deep enough or warm enough for her eggs to hatch.

Here’s what you need to do.

Turtles do not care for the eggs after she buries them. So, take them out and put them in an egg incubator. Keep the eggs between 78 to 82 degrees Fahrenheit. They should hatch within 55 to 70 days.

After the hatchlings break out of the eggs, do not take them out immediately. They will stay in the nest for 2 to 3 days feeding on the yolk. Only then can you take them out from the incubator.

Do not put the hatchlings together with the mother turtle. She will most likely eat them.

How To Prevent Cannibalism In Your Turtle Tank?

You can safely keep several turtles in the same tank if you know what you are doing. First, consider the turtles’ sizes when keeping them together.

Remember that turtles feel reluctant to go after turtles their own size. Also, adequately feeding your turtles prevents cannibalism.

Turtles do not want to tussle with other turtles of their own size. If raised together from a young age, both the turtles will respect each other’s boundary inside the tank (until they grow too large for the tank).

Never put tiny turtles with larger ones. The bigger turtles will devour smaller turtles in a New York minute.

And it will be better not to put two large turtles together, too. Only keep them together if you have a stock tank that can fit hundreds of gallons of water. It will be even better to switch to an outdoor pond when your turtles are fully grown.

One Turtle Per Tank

First of all, if you do not want to take any chances with your turtles eating each other, keep them in separate tanks. This is the most viable option to prevent cannibalism.

A turtle requires 10 gallons of water per inch. So, even for a small turtle, you will require a large tank.

Hence, it is wise to put them in separate tanks.

Use A Tank Divider

Not all of us can afford to keep turtles separately. Some may find the upkeep costly.

So, get a bigger tank and use a tank divider instead. This will let you put two turtles in the same tank without them biting and nipping each other.

I use this transparent tank divider from Toyuto. I don’t think it is a Japanese brand, but it sure is durable like a Japanese product.

Feeding turtles adequately also helps prevent fight outbreaks in a turtle tank. So, feed them enough but not more than necessary.

Also, put their food in separate places where one will not encroach on another’s territory. And do not feed them at different times. Otherwise, you will find them fighting over food.

Final Words On Do Turtles Eat Other Turtles

Humans were once cannibals, too. So, it shouldn’t be that shocking to know that turtles eat other turtles. However, do not mistake such behaviors for a routine.

Turtles only display such demeanors when they starve, have territorial disputes, or sometimes feel like doing so.

So, it is advised to put turtles in separate tanks or use a tank divider as I do with my red-eared sliders.