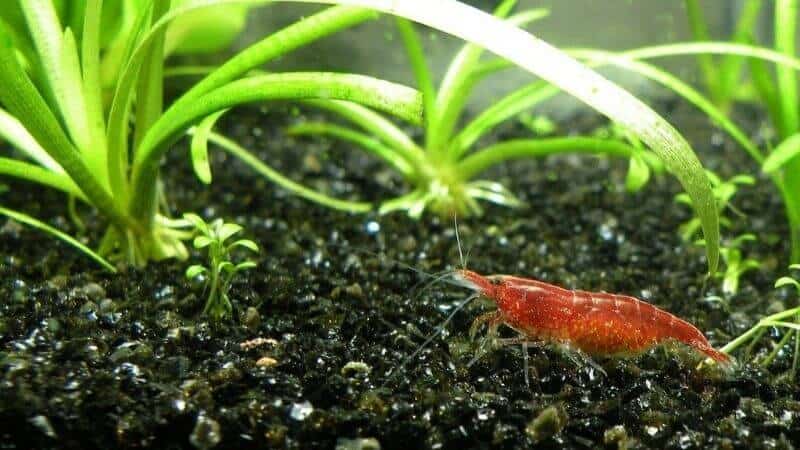 People say turtles are solitary animals. But the sight is even more beautiful and fun when your turtle tank welcomes new tankmates. In nature, turtles live in rich ecosystems with their friends, prey, and predators. But in the tank, there are very few species that can cohabitate with territorial turtles.

Shrimp is one such species. Shrimps are extraordinary creatures that dwell in the bottom of lakes. They scrape off the algae and other plants to consume. Most shrimps have prolific reproduction ability; thus, maintaining their population even though they’re at the bottom of the food chain.

So, what about keeping turtles with shrimps? Do turtles eat shrimps? Yes, your turtle will eat shrimps if it can catch any. However, shrimps are fast creatures with an exceptional capability to hide among the plants. Your shrimps might be safe if the tank is large and full of plants that provide enough hiding space.

Can Turtles And Amano Shrimps Live Together?

Amano shrimp are larger than most other pet shrimps. They are also relentless algae eaters. However, Amano might put up a fight with the turtle if attacked. Adult Amano shrimps can grow up to 2 inches. But for them, it’s a losing battle – your turtle will always overpower in the end.

Amano shrimps are more expensive than other shrimps, too. So, I recommend not to buy these shrimps just so they can be your turtle’s next meal. . Also, Amano shrimps cannot breed and create colonies in captivity to their full potential. They need brackish water to lay their eggs. However, they have to live in regular freshwater once they reach the juvenile stage.

So, we can conclude that Amanos aren’t the right choice of shrimps to be kept in a turtle tank.

Can Turtles And Ghost Shrimps Live Together?

Ghost shrimps are one of the most clever shrimps best known for their ability to camouflage with the water. They are translucent and aren’t easily noticed by their predators. Members in several turtle forums have claimed that the survival rate of ghost shrimp is better than other shrimps in a turtle tank.

Before keeping ghost shrimp in a turtle tank, you need a lot of plants to help the ghost shrimps hide whenever the turtle attacks. Turtles aren’t relentless predators and will give up after a few chases. They will be better off feeding on pellets rather than struggling to eat your ghost shrimps.

Ghost shrimps are bottom dwellers, and your turtle needs to dive deep enough to chase these tiny creatures. Since a turtle cannot hold its breath for a much longer period during strenuous activities like hunting, ghost shrimps will have a better chance of surviving a turtle attack.

However, if your turtle encounters a docile or a dead shrimp then he won’t hesitate to devour his meal. Here’s a short video of a turtle eating ghost shrimp.

Can Turtles And Cherry Shrimps Live Together?

Cherry shrimps are tiny red shrimps that can easily catch your turtle’s eyes and make it jump after them. Yes, turtles can see color just like us. They can see even more shades of red than we humans do.

However, cherry shrimps can proliferate rapidly and will increase their numbers, which will balance their population. Some species like mud turtles won’t even go after them. So, there are high chances that your cherry shrimps will thrive in a turtle tank.

But you need to keep enough plants and decorations (both fake and natural) in your tank. This will let the shrimps have abundant hiding space to keep them safe from your turtle.

A decoration that also serves as a hiding place like this one from Plenn-Plax can go a long way in helping your shrimps sustain.

This particular model features several windows and tiny slots big enough for shrimps to hide inside comfortably, while also being inaccessible for prying turtles to reach.

Benefits Of Having Shrimps In A Turtle Tank

Turtles are messy creatures. They practically eat and poop in the water, leaving out substantial amounts of waste every time. Shrimps, on the other hand, feed on these leftovers. They dwell on the bottom of the tank and will eat all the residues of your turtle’s food. They even feed on poops of fishes and turtles, which makes them natural cleaners for your turtle tank.

Even if your shrimp is attacked and left half-eaten by the turtle, your other shrimps will eventually clean the carcass by feeding on it.

As shrimps are natural cleaners for the tank, the chances of your turtle becoming sick because of the water parameters and unhygienic tank practices are reduced.

Keeping shrimp is easier than keeping fish. Once the tank’s ecosystem gets going, your shrimps will be independent enough to take care of their dietary needs. You won’t have to serve pellets or any other food to help them thrive.

If algae pose a problem in your turtle tank, shrimps are the right choice for you. But these shrimps will only feed on soft algae.

A turtle won’t leave a shrimp alone if it is in the turtle’s vicinity. However, a well-planted tank will let the shrimps hide and protect themselves when the turtle is after them. Among all shrimps, ghost shrimp and cherry shrimps have better chances to thrive in a turtle tank. Keeping shrimp in your turtle tank will give your turtle pristine water to dive in and a picturesque tank for you to be proud of.

Do Turtles Eat Apples? Can Apple Seeds Cause Cyanide Poisoning?